Book Review: Our One Common Country 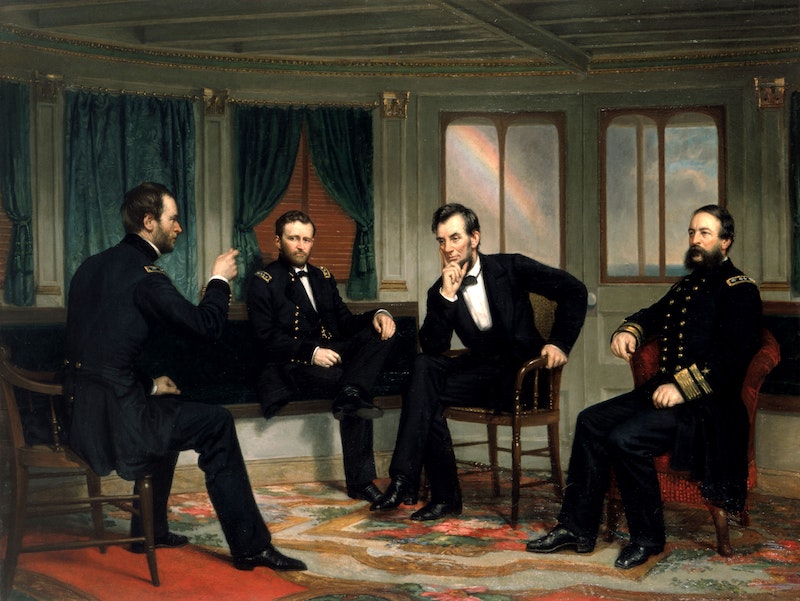 Early on a winter morning in 1865, Abraham Lincoln exited the White House on a mission that only one of his staff or cabinet members, Secretary of State William Henry Seward, was aware of. An eight-hour boat trip down the Chesapeake Bay on the USS Thomas Collyer would deliver the President to Hampton Roads, Virginia, where he’d be the first, and last, U.S. president to carry on peace talks with the enemy in the midst of a war. The emaciated Lincoln was weary from his journey and said he'd meet the Confederate contingent the following day aboard the sidewheel steamer River Queen.

So begins James B. Conroy's Our One Common Country: Abraham Lincoln and the Hampton Roads Peace Conference of 1865, a meticulously researched, detail-oriented account of the secret meeting aimed at ending the Civil War peacefully. Lincoln and Seward represented the Union. On the other side of the table were the Confederate peace commissioners: Vice President of the Confederate States of America Alexander Hamilton Stephens, president pro tempore of Confederate Senate Robert M.T. Hunter, and former U.S. Supreme Court Justice and Confederate Assistant Secretary of War, John A. Campbell.

Four years of war had taken a toll on the Confederacy. Gen. Ulysses S. Grant had advanced on Richmond, pounding Gen. Robert E. Lee’s army. His subordinate, Gen. William Tecumseh Sherman, had completed his destructive March to the Sea as part of his plan to inflict pain on the citizens of the Confederacy and break their will to continue the fight.

The author, a Boston-based attorney, has written a character-centric book rich in period detail and atmospherics. He vividly portrays the collegial atmosphere at the beginning of the meeting—the warm greetings, cigars smoked, reminiscences of better times when they’d worked together in Washington. The men seemed eager to prolong the camaraderie, but Stephens called the meeting to order by asking, “Is there no way we can put an end to the present troubles and restore the good feelings that existed in those days between the different states and sections of the country?” Lincoln cut right to the chase, replying that the only way he knew was for “those who are resisting the National Authority and the laws of the United States to stop.”

Stephens, the delegation’s leader, was a tiny man weighing less than 100 pounds. The author describes “Little Alec” as possessing a “Lilliputian voice and windy Victorian style,” which was elaborate and showy. The Georgian talked of the Monroe Doctrine and France’s military intervention in Mexico, suggesting a moratorium on North-South hostilities to address that issue in an alliance. Lincoln, however, had no interest in stopping one war just to start another. He restated his insistence that the Confederates lay down their arms prior to the restoration of “our one common country.”

Judge Campbell was charged with the task of sounding Lincoln out on how a national reunion would be structured. Confederacy President Jefferson Davis was demanding a truce prior to peace negotiations, but Lincoln quickly made it clear this was off the table. Hunter cited the precedent of Charles the First negotiating with armed rebels in the English Civil War. Lincoln laughed and “delivered the jibe of the day” with his reply: “My only distinct impression was that Charles lost his head.” Lincoln had one more bomb to drop when the aristocratic Hunter asked him if Rebel leaders had made themselves “proper subjects for the hangman.” “That is about the size of it,” he replied.

The Hampton Roads meeting lasted only four hours. That's too light for an entire book, so Conroy fleshes out his story by detailing the fast dealings that produced the talks, and reporting on the peace delegates once they’d disembarked the River Queen. He portrays the talks as doomed even before the first cigar was lit, because Mexico was a second-tier issue to Lincoln, and the President boarded the River Queen knowing he'd accept nothing less than surrender and reunification as a prerequisite for peace. Francis Preston Blair Sr., a prominent journalist who was a personal friend of both Lincoln and Davis, had brokered the peace conference, but he'd misled Davis on the President's flexibility.

Davis hadn't granted his peace emissaries the authority to consider a one-nation solution. By stubbornly insisting the Confederacy remain independent, he was willing to risk many more Rebel deaths in what looked to be a lost cause. By the author's reckoning, it was Davis’ vanity that got in the way. He took Lincoln’s bargaining from strength as a personal insult, reacting as if he'd been personally affronted instead of offering true leadership.

Conroy brings his characters to life by highlighting their personalities and agendas, adding dimensionality with plenty of background material. The four-and-a-half years he spent on the book allowed him to provide the context necessary to understand the complexity of the events and the nuances of the various intrigues he details. The author’s skillful writing holds the reader's attention in telling the story of an historically overlooked peace conference that, while it failed, came to define the issues that triggered the Civil War, as well as those that led to it continuing on until Robert E. Lee’s surrender at Appomattox on April 9, effectively ending the war.