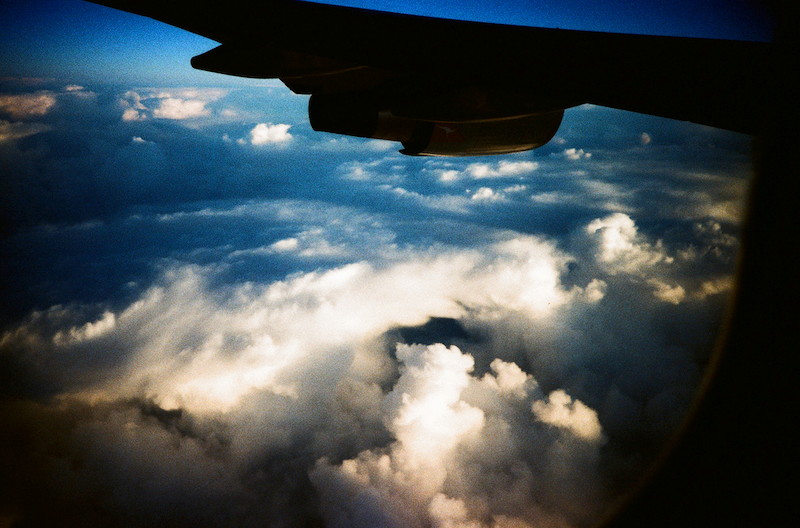 Nobody on our flight from Oakland to Portland is talking... except for the two people sitting directly behind us on this Bombardier 400. Before I put in my earbuds and began listening to a conversation between two monologists, I learned that he works in rural Oregon, dealing with wine. She was jealous of the solitude and natural beauty. He mentioned the grass and how it always appears greener. The solitude can be overwhelming. They've been at it for 40 minutes. It seems clear they’d like to have sexual intercourse with each other, as they are both young, active humans, who seem to have a zest for life.

There’s a young woman reading a book one row in front of us. She turns. Her thin paperback has a yellow cover, and the title is something like A Billion Stories, which clearly wouldn’t fit in such a slim volume. The captain gets on the PA system again and I remove one earbud. He gives us another update about possible turbulence. It strikes me that the constant talk of turbulence will simply raise the anxieties of some passengers. Better to have us experience the bumps, or warn us only when the bumps are imminent. I’m okay with mild turbulence.

Though this Bombardier is small, with a capacity of only 80, it’s much larger than the 30-seaters we’d take from Pittsburgh to Parkersburg, West Virginia. I was 10 the first time. I remember the summer trip. Usually, we drove from Boston, the 12 hours or so, sometimes stopping overnight near Baltimore, where my Uncle Dave lived. The Cumberland Gap is an amazing phenomenon. You can imagine how difficult it must’ve been to settle the land west of Virginia and south of Pennsylvania, where the Appalachian Mountains rise up out of the earth. West Virginia, along the Ohio River, is full of summer thunderstorms. Flying through them, that first time, in that tiny plane, was excruciating for an anxious child. When we touched down, I believe I was sweating. But maybe that was just the wall of humidity that hit our faces as we stepped down onto the tarmac of the one gate airport. Now, whatever turbulence we meet as we descend toward Portland will likely feel mild, and only slightly uncomfortable. I imagine 10 years from now, comforting my daughter, who’ll be nine and a half. I wonder where we might be landing then.