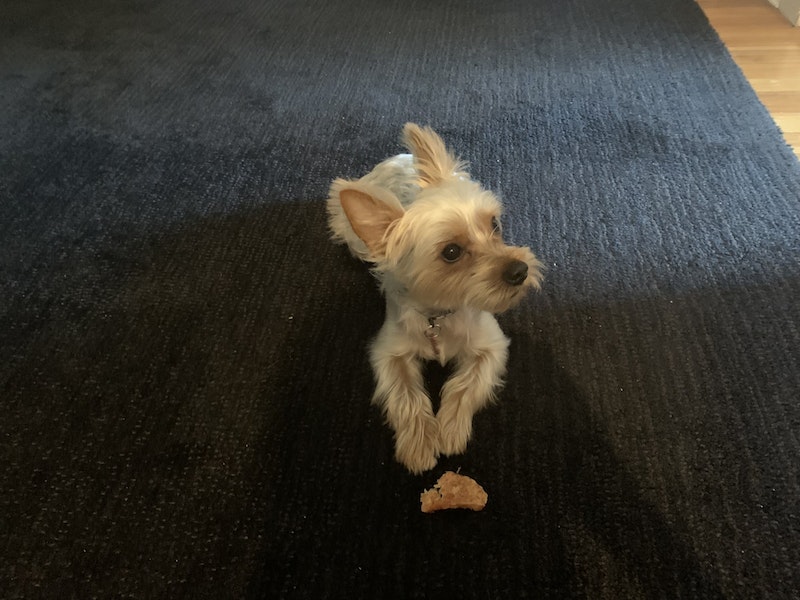 At this time of year, the ancient phrase “Dog Days of Summer” is often evoked, and although its meaning is more complex than you’d think (going back centuries, involving the Sirius star system), I think the cliché has far, far more staying power than “the silly season,” which journalists at one time—when there were more than 121 real journalists working—used to describe August, because Congress was usually out session and even though world and domestic events didn’t cease, it was too damn hot to write about anything other than Mrs. O’Neill’s “world-famous” crop of tomatoes in Pennington, NJ.

In that spirit, an effort to be part of “the gang,” the above is a recent picture of our family dog, a seven-pound Yorkie named Billy. As in Billy Smith, and if that strikes you as a generic name, just get fucked, Uncle Tonoose (hmm, that’s kind of mean since I dug Hans Conried on Make Room for Daddy, so let’s abridge that to just get fucked, Little Joe; I feel so much better and that’s important).

Every morning Billy Smith, who has a mild case of canine OCD, eats his wake-up biscuit in the same spot, the rug outside my office on the third floor of the house he’s taken over in North Baltimore.

See Billy Smith crunch that biscuit and swallow. See Billy Smith wander over to me at 6:42 a.m. and scratch my right arm, which because I’m thin-skinned—physically, not mentally, you assholes—leaves bruises and drops of blood on the wood floor. I don’t mind, it’s fun wrestling with Billy Smith, but my wife, to whom Billy Smith is devoted, is horrified because it makes my arms look like they’re festooned with very amateurish tattoos, which I would’ve received in Bangkok for 500 baht during the Vietnam War, but for the fact that the draft ended before I was old enough to serve in that war, not that was ever in the picture. (In a really weird twist, my older son told his grade-school classmates that I had indeed seen action in Southeast Asia, perhaps because I said could predict when it was going to rain, citing my ‘Nam injury.)

See Billy Smith bark—or hear, if you can—when he sees a German shepherd outside the window on the second floor, and you’ll agree that’s the bark—and vicious growl—of a dog that’s at least 30 pounds. I like to hear Billy Smith bark because it reminds me of Scuttle, the mutt we had when I was a kid growing up on Long Island. Only difference is that Scuttle’s bite was 20 times worse than her bark, while Billy Smith is a sweet pea—a “world-famous” sweet pea—whose very loud exclamations are very innocent, for when someone enters the house, after a furious pipes-clearing from Billy Smith it’s licks all around.

By contrast, Scuttle bit John the Mailman, Kenny and Laurie McGuire, Adam Shapiro, a high school Spanish teacher we called Senor Stamp, and, most memorably, this little shit of a Scottie next door who one day bit the neck of our Persian cat Freddy, who went nuts, bouncing off walls in the garage, and shortly after because of a pinched nerve and had to be exterminated.

Billy Smith, who’ll turn one on August 30th, is a very jolly dog, except when he gets a shot from the local veterinarian, and when he was “fixed,” not so long ago, Billy Smith was not happy, and had nightmares for several days afterwards. Well, that’s understandable, human or dog, when your balls are snipped off.

Those of you who don’t have a generous bone in your withered body probably think that my writing about Billy Smith is a lazy exercise; the few who are more charitable will chalk it up to the “dog days of summer,” but rather than write about the “world-famous” cucumber patch of Mr. Claude Johnson of New Hope, PA, or the “world-famous” swiss chard soup of the precocious teenager Janice Rooney of Beverly, MA, my story about the Yorkie Billy Smith is one of the most affirmative, positive and soul-cleansing collection of words that you’ll read this week, especially for the millions who don’t want to hear another word about the current President of the United States—so sorry, sir, I forgot his/her name, for I’m 66 and block out unpleasant thoughts—who fucked up the Afghanistan withdrawal so badly, even pissing off the Prime Minister of England (that nutty former tennis player and author Boris, who’s no longer in the weeds because of his American counterpart) and jeopardizing the “world-famous,” going on for decades now, “special relationship” between the United States and that island that idiots in the press say is, at least 82 out of 121, “across the pond.”

And, no short shrift to the gut-buster delivered by former President Trump at a rally of kooks last week, saying, not entirely untrue, mind you, that “Everything woke turns to shit.” As noted in this space before, on a subject that bears no resemblance to the “silly season,” I do wish Trump would fade away, but there’s no denying the man has a stellar sense of humor, unlike Barack Obama, who’s trying so fucking hard to be “cool” that he’s pulling a Chris Christie and hosting a podcast with Rock ‘n’ Roll Ambassador Emeritus Bruce Springsteen, another guy who was never really “cool” in the Bowie sense of the word.

Billy Smith, to my surprise, can’t read, but he’s getting a whiff of what I’m typing and is now scratching my arms, so before I continue, I’m afraid it’s time to break out the Donald Duck band-aids that I favor. Have a good one, and see you in a few!

Back, back, back, “happy campers,” especially those who’ve emerged from a “rabbit hole” of their own making, and a hearty welcome to the millions of new readers who’ve checked in just to see what I think of Boston Red Sox “closer” Matt Barnes, the pitcher now plagued by a “ginormous” “I’m-not-sick-but-just-look-like-it-and-I’m-not-trying-to-blow-saves” extended period of ineffectiveness that coincided with a premature extension of his contract.

The biggest “ups” to Garrett Whitlock!