Between Forgery and Fiction

The author wresltes with anti-semitism in Umberto Eco's The Prague Cemetery. 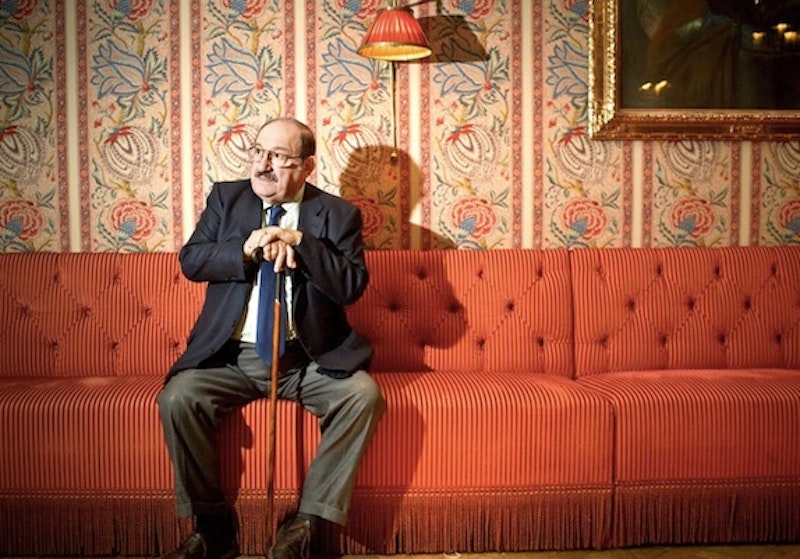 The Prague Cemetery, Umberto Eco’s latest novel, was published in 2010 and immediately became an international bestseller. The reviews of the book were largely positive, but some dissenting voices were heard, sparking a controversy. A review in l’Osservatore Romano, the quasi-official Vatican newspaper, dismissed the novel as a poor literary performance, and argued that the main character’s anti-Semitism might infect the reader.

“Forced to read disgusting things about the Jews,” the piece said, “the reader remains tainted by this anti-Semitic nonsense, and it’s even possible that someone may think that maybe there’s some truth if all, really all, the characters seem certain of these crimes.” Rabbi Riccardo Di Segni of Rome made a similar point in conversation with Eco: “At the end the reader asks: ... these Jews, do they or don’t they want to overthrow society and rule the world?”

In a sense, these doubts were a sign of the book’s success. Eco tried to make his main character and narrator, a sometime spy named Captain Simone Simonini, “the most cynical and disagreeable [figure] in all the history of literature.” Simonini’s a deceitful, murdering anti-Semite, whose career as a document forger reaches a climax with the creation of The Protocols of the Elders of Zion—a very real tract that was, and is, used to justify hatred of the Jews.

Published in 1903, and first debunked in 1921, the Protocols is a farrago of plagiarisms claiming to be a record of speeches given by sinister rabbis during a nighttime meeting in a Jewish cemetery in Prague. The text spawned any number of anti-Semitic conspiracies, and arguably helped foster the broader genre of conspiracy-theory texts—the pseudo-histories of Templars and Rosicrucians. Eco’s been fascinated with conspiracies for a long time; conspiracy theory, and the Protocols specifically, were major elements in his novel Foucault’s Pendulum. His latest book is a return to this theme, an investigation by an academic semiotician of the distance between invention and history, between forgery and fiction.

With the book’s recent translation into English by Richard Dixon, the controversy’s been examined again in another round of reviews. Most critics, including writers in Haaretz and The Jewish Week, appreciate what Eco’s trying to do with the book, whether or not they agree he succeeded. It’s certainly shocking to read the anti-Semitic passages in the novel, along with hateful passages about other ethnicities. But Eco’s noted that many parts of the book—descriptive passages, battle scenes, recipes —are culled from historical sources. Simonini’s hate is the real hate of eras past, and indeed often of the present. We are shocked not by the sordidness of Eco’s imagination, but by the sordidness of reality. Eco’s included real period illustrations in the book, some anti-Semitic caricatures among them; visible signs of the hatred Simonini feels.

Simonini may be fictional—the only major fictional character in the book, Eco claims—but the Protocols were all too real. In a sense, the Protocols are the major character, or major identity, in the book. We follow Simonini’s picaresque tale over the course of several decades, seeing him absorb influences and develop an ideology that would come to be reflected in the text of the Protocols. Appropriately, he ends up with a cover identity as the proprietor of a junk shop—a rag-and-bone man collecting scraps and debris. From a certain perspective, all that Simonini is seems determined by what ends up in the Protocols; he is their ideal author. (In reality, the actual authorship of the Protocols is unknown.)

There’s a parallel to be made between Eco and Simonini in this sense: both are collectors of pieces of text, both pick up and use to their own purpose bits of things written down in the years before them. But Eco’s using things recorded as truth to make a fiction. Simonini, eager to steal from genre writers like Alexandre Dumas and Eugéne Sue, tries to pass off fiction as truth. His deceptions spiral out of control, swallowing even himself. As the novel opens, he’s suffering from a strange case of split personality. The text of the novel is presented as Simonini’s diary, as, following the advice of Sigmund Freud (whom Eco coyly refuses to name explicitly), Simonini tries to write out his past in order to force to the surface memories he’s repressing.

As a novel, The Prague Cemetery is a mixed bag. There are some clever conceits. But Simonini never really comes alive as a character. His hatred of the Jews, which he claims to be the driving force of his life, isn’t really consistently manifested in his language and writing—there’s not the obsessive circling-back to his paranoia and hatred that one would expect. He doesn’t seem like a man who would describe the Protocols as his “life’s work.”

The resolution of the multiple-personality subplot also seems too neat, which may illustrate the problem: Simonini seems like the idea of a character, a sketch and not a living person. Some aspects of the character remain unlikely. Eco writes him as asexual and misogynistic, but also seems to imply that he’s repressing some sexual element that remains obscure. Eco’s said that he gave Simonini “food instead of sex,” but the mechanism of that displacement is equally unclear.

It’s hard not to compare The Prague Cemetery with Michael Moorcock’s The Pyat Quartet. Both books use a near historical setting to present the picaresque adventures of a first-person narrator who suffers delusions of his own importance. Both Eco’s Simonini and Moorcock’s Colonel Pyat are anti-Semites, racists, and misogynists; Pyat’s a pedophile for good measure. But whereas Simonini’s narrative feels stitched together from odds and ends of historical prose, Pyat is thoroughly convincing as a monster and a buffoon, a character with whom we identify even as we abhor him and everything about him. In large part this is because we see the world through Pyat’s limited understanding, as he confuses dates and names and generally muddles his memories in order to cast himself as the hero of his story. Simonini’s too objective, too precise, even when he’s split his psyche in two.

Structurally, Eco’s book sputters out at the end. There’s a dramatic scene near the end where one character renounces diabolism and occultism, a subject that enters the book late in the tale; still, as a revelation by a charlatan of the games he’s been playing, it feels like it ought to be the climax of the work—the unveiling of the truth. Nothing afterward really matches it for impact, yet the story limps along for some time. Simonini’s writing of the Protocols seems like an afterthought, a sequel to the main action of an admittedly episodic novel.

It doesn’t help that most of the cast of spies and secret policemen, and almost all of the drivers of the Protocols plot, seem to be anti-Semitic only incidentally. Nobody involved with the Protocols literally believes the text, or even believes that it says something about Jews. They’re more interested in manipulating the hatred and anti-Semitism of others. When Simonini asks a Russian spy, “Why are you after the Jews in particular?” his answer is: “Because in Russia there are Jews. If I were living in Turkey, I would be after the Armenians… I don’t want to destroy the Jews. I might even say the Jews are my best allies. I’m interested in the morale of the Russian people… We need an enemy to give people hope… National identity is the last bastion of the dispossessed. But the meaning of identity is now based on hatred, on hatred for those who are not the same.” The Jews, then, are only a convenient target for cynical manipulators. And hatred, in Eco’s story, emerges not from the bottom up, not from the people, but is instilled from the top down, as the result, ironically, of a conspiracy.

In fact, the linkage of hate with identity seems to highlight a key theme in the book. From a certain point of view, the ethnocentrism in which Simonini puts such weight is a way to create a collective identity to make up for a lack of individual identity. As a forger, a man who makes his living by passing off fakes as real, Simonini’s intimately involved with the creation of pseudo-identities: “believe in what is written,” the forger tells himself at one point. So he writes out his prejudices, to give himself something to believe, even when he has no reason or basis for hate—“I hate women, from what little I know of them,” he muses.

Simonini’s a mystery even to himself, a literal mystery, since he writes out the text of the book as a way to work out who he is, a way to integrate his fractured personalities. How this fracture happened, and what he has done in his life, is the unfolding plot of the story. Simonini notes his fascination with melodramatic writers like Dumas and Sue, with stories structured, as one character observes, with “clear, simple ideas—black and white, good and bad, and there must be only one villain.” Thus the structure for the Protocols, which actually does plagiarize Dumas and Sue, is apparently for Eco the ur-structure for conspiracy theory as well.

Conversely, Eco tries to emphasize the multi-layered in his creation of Simonini. The many-chambered junk shop, with its inner sanctum of treasures, isn’t just an image for the texts Simonini creates or plays with, and it’s not just an image of European culture as a whole; I think it’s also meant to be an image of Simonini’s personality. Along the same lines, when Simonini chooses to set the Protocols in the cemetery in Prague that gives the book its title, he describes the place as having multiple strata of history, graves over top of graves. Eco’s choice to use the cemetery (only imagined, never shown) as the title of the novel foreshadows the Holocaust partially inspired by the Protocols, but it also reflects the layers in Simonini himself and in the text he creates: the weird sandwich of fictions and plagiarisms.

Ultimately, although the book’s not a complete success, it’s certainly worth reading. The anti-Semitism, in text and images, is disturbing to encounter—but the pictures especially remind us that it was reality. To ignore this legacy of hatred is worse than to be confronted with it. Eco challenges his readers, but does not do so without consideration of his material. He has a sharp eye for how hatred rationalizes what it can’t dismiss, and how it seizes on “facts” and refuses to question them even when they’re most unbelievable. Though the specific subject he’s writing about is the Jews, it’s easy to draw applications from what he describes to contemporary forms of hatred, and other marginalized groups. It’s difficult matter, but a valiant attempt to display how otherness can become a pretext for hatred.