The Computer Geek and the Stripper

A story of obsession, degradation, and a computer that didn't get fixed. 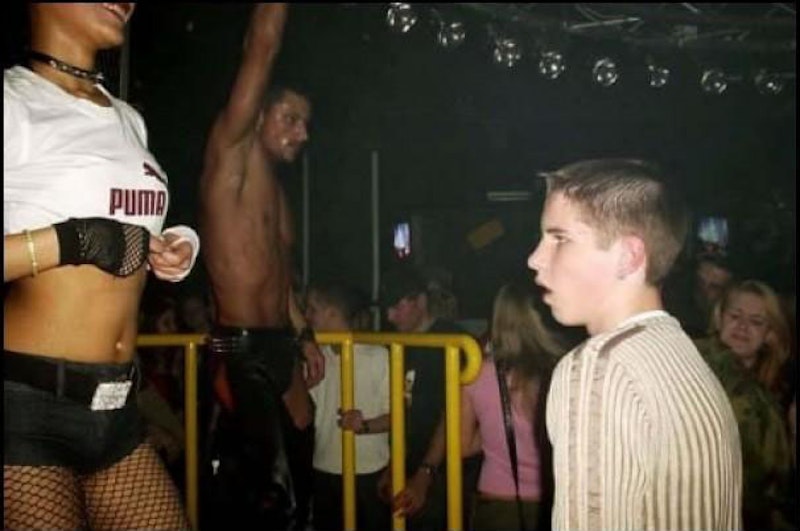 The first time I met the computer geek he told me about a client who had pulled a knife and held it to his throat. He said she was an old lady known throughout the neighborhood as a solid citizen. He got out of the fix, he said, by remembering that she was friends with the proprietor of the used book store down the street. The proprietor had just died, so the geek could say, “Did you hear about Alvin? Isn't it a shame?” This was enough to break her train of thought. He never did get her to pay, but at least she didn't cut his throat. Did he call the police? No, of course not. “This old lady everybody knows, pulling a knife. Who would believe me?”

The next time I saw him he told me about his problems with the stripper. This was a few days later, when I was picking up my computer. He works in a narrow, dingy suburban storefront that is really more like a hallway. It retreats into the near distance, laptops stacked everywhere and looking like they're about to fall over. The man himself is titanically fat: I was surprised both that he could fit on a stool and that he could stand up. Both times that I saw him he hadn't shaved, and he has long gray hair that straggles behind his head. To talk to him in his store is to feel crowded: by the place, his body, and his sadness, which is immense. But my train back home (he's out in the suburbs) was an hour away and it was cold outside, so I stayed and we talked as I checked to see if all my files were still intact.

He baited me into asking about the stripper by using the word “squandered.” I forget the context. Money had come up, and I think he said that at one point he had squandered his savings. A second passed, another, and I decided to ask. So he told me his story.

Eight years ago he left his wife and two children and started hanging around a strip club near his neighborhood. Within two weeks he had attached one of the strippers to himself. Her stage name was Kara, and he said he was so naive that he thought it was her real name. On the other hand, he used guile to get next to her. Flashing a lot of money was the start; then he arranged to drive her home. Admittedly, this was not a long campaign. He simply stayed in the club until closing, then asked if she wanted a lift. She said no. The next night he stayed again, and this time he didn't ask but instead acted as if the matter were settled: “I'll give you a lift.” She went along and invited him up when they got to her place.

The two of them lasted four years, and their relationship came down to two things: She pestered him for money, and every night at the end of work she publicly and quite visibly accompanied him to his car to be driven back to her apartment. That was his perk: “A roomful of 50 hot, horny dicks who've been getting worked up all night, and they see I'm the one she leaves with.” If she hadn't done that, he said firmly, he would have called the whole thing off. How was the sex? “There just about wasn't any,” he said. And she kept dinging him, one thing after another. One time she took him to the bank because her telephone bill had to be paid off. She pretended this was a matter of paying off bills, plural, that the figure for each month had to be paid, as if there were no such thing as a running total. The ploy fell apart in the face of the geek's and the teller's inability to believe she was serious. “She sounds really stupid,” I said. “Well,” the geek said, “she was smart enough to take me for $40,000.” That was his estimate of what he spent on her over the four years.

She was Moroccan, 20 years old when he met her, with a hot shape. Anywhere he went with her, he said, “black guys would appear from nowhere. It was like flies on meat.” I was a bit taken aback that he got into race, but so be it. He once took her to meet his two children. He was that far gone, he said, that even while he was paying out money to her he thought there was some sort of connection, one that could support an interest in his kids. It didn't, of course. His boy was 6 and his daughter 10, and he brought them to see a woman dressed like a streetwalker. The matter passed more or less over the head of the little boy, but the girl was traumatized and wouldn't talk to her father for years. Another time he was driving the stripper and one of her hot friends. The hot friend didn't like the geek's little dog, which was riding with them, so she simply picked it up and threw it. She didn't throw it anywhere in particular, just away from her, and the dog bounced against the car's window. “Wow,” I said. “No class.” “No,” the geek said. “No class at all.”

On an impulse, I asked what music the stripper liked. He had an answer ready: “That Tumack fellow. Or Tulack. Tulack Shamur?” I said, eager, “Tupac Shapur!” He nodded. “She had a shrine to him in her place,” he said. And how did the affair end? “She told me she was pregnant with a black baby and it was time to get serious and buy her a condo. I told her, 'No way. That's not my baby and it's not my problem. Don't call me again.'” His wife, blessedly, took him back, and he settled in for years of couples therapy and anger management sessions. That last bit took me by surprise, so I asked about it. He shook his head gravely. “Never hit a woman,” he said. “No matter what, no matter the circumstances, never use violence against a woman.”

He said his daughter had recovered from her trauma halfway through high school, went on to get straight A's and excel at swimming, and was now in college and continuing to get good grades while she prepared to be a psychotherapist. He said she had been inspired by the various counselors and therapists who had helped her through the wreckage he had caused. His boy was now entering adolescence and doing all right except that he had trouble minding his mother.

My train was due in 10 or 15 minutes, so I paid the man and took my leave. The ride home was through bleak, gray weather, and I felt overburdened by the scene I had just gone through. Somehow the vast, sagging plain of stubble along the man's face had made everything worse. I never wanted to see him again.

When I got home, I found that my computer, which I had paid to be rendered virus free and secure, had an odd glitch. Some files could be deleted, but in other cases the computer said it couldn't find the files even though they were right there in front of me. I called the manufacturer, and a nice gentleman in India had to spend a few hours wiping my hard drive through remote control. It turned out that my virus-free computer had a virus after all.

The conclusion I draw from this matter is that some people will say anything to get out of doing their job.