Straight Talk for the Girl with the Big Ass

Some things that never got said but would have helped her plenty. 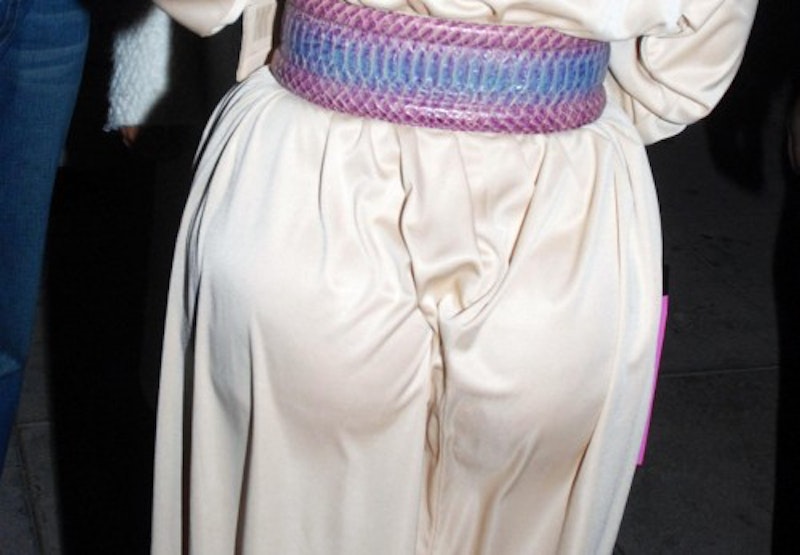 Okay, so it sounds like I was right. No, look, that is exactly what I said. He hung out with you, he never said a word about any romantic interest, and now you’re upset because it turns out he’s not interested in you. Only, please, “turns out” is not correct. If he spent eight months in your company every Tuesday and Friday afternoon and he never touched you and never said anything to indicate an exclusive interest in you, then you should not have decided he was being romantic. You’re graduate students, you sit around and talk, and he likes doing that, and why didn’t you consider that possibility?

The amazing thing is I described the situation even before you did. You tell me there’s this “friend,” he’s a “guy,” and then that you hang out, and then you go “Uh, uh, uh” because you can’t say the words. So I say it for you, I do the work, and then you tell me I’m wrong. And then you go ahead and tell me exactly what I just said: The guy spent time with you and you thought something was assumed, and now it’s been put to the test and it… turns out… that, well, no.

Yep, that is what I said. Yes, it’s the same. Look, Nisha, Okay. Can I…? Can, can I …? Look. You spend your life playing this game. All right? “Keep the ball off the ground.” What’s the ground? Reality. What’s the ball? This idea that you’re special. No, listen. I don’t mean intelligent or worthwhile or talented. I mean special, as in there’s the rest of the world and then there’s you, and you’re the best part of it all. You accept life on no other terms. You have to be the best, the shining one. And, talented as you are, you are not life’s shining one. You weren’t the best in the office. You turned in a piece about fiber optics that made no sense. Shelley and I just looked at each other and smiled. But you’re supposed to be flawless. That’s how you see yourself and everyone has to play along. If we don’t, you make noise. Like right now, okay? Right now. Do you realize that? You are going off like a car alarm.

That is just the price of being around Nisha. And we pay it because you’ve got your strengths, and I happen to like you. But I like you despite a lot of things. You and I had our problems, and we straightened out some of them, but we did it because I make a practice of such things. Ask around. Find me someone around the office who says I don’t make an effort to listen. Then find someone who says that you do. Here’s what Paul said about you: “Because you know she’s crazy.” That was a given, all right. You’re crazy. Well, there are two that think it, Paul and me. Find me someone who doesn’t.

You’ve got a lot of charm and energy, and you make a lot of noise to keep the world in line. That’s your tactic. Whether you want attention or want to shut something down, you make noise. And there are few moments when you don’t want attention or don’t want to shut something down. Why is that? Because you’ve got something to hide. You can’t hide it from the rest of the world, but you hide it from yourself. You do so by pretending the rest of the world is blind. But we all see it, and we know that’s why you’re talking so loud.

You have a huge ass. You have a grotesquely large ass. It juts out, and by “juts” I mean there’s room for a dinner tray. You look like a head, a pair of watermelons, and then a Volvo. You’re a big girl, and you can pretend men just have to get used to non-sticks and non-twigs. But even for a frame like yours, your ass is out of proportion. It looks like it got the best of you. The two of you wrestled for dominance of your shared living space, the ass won, and now you’re the appendage. You’re the ribs and shoulders and hair hanging at the other end of a bulb of flesh. The ass is the person.

That’s what it’s like to see you. That’s why a guy hangs out with you for a year and doesn’t touch you. Don’t cry at me. Get a therapist and start dealing with this because the rest of us are tired of having you export your problems. You’re not going to move ahead until you give up your lie. Your lie happens to involve being physically grotesque from your hips to about a yard in the other direction. That’s a dumb thing to have to deal with, but it’s what God gave you. Start working on it.

Okay, hang up. You still have a big ass.