Guess who scored highest when everyone in KISS took an I.Q. test. 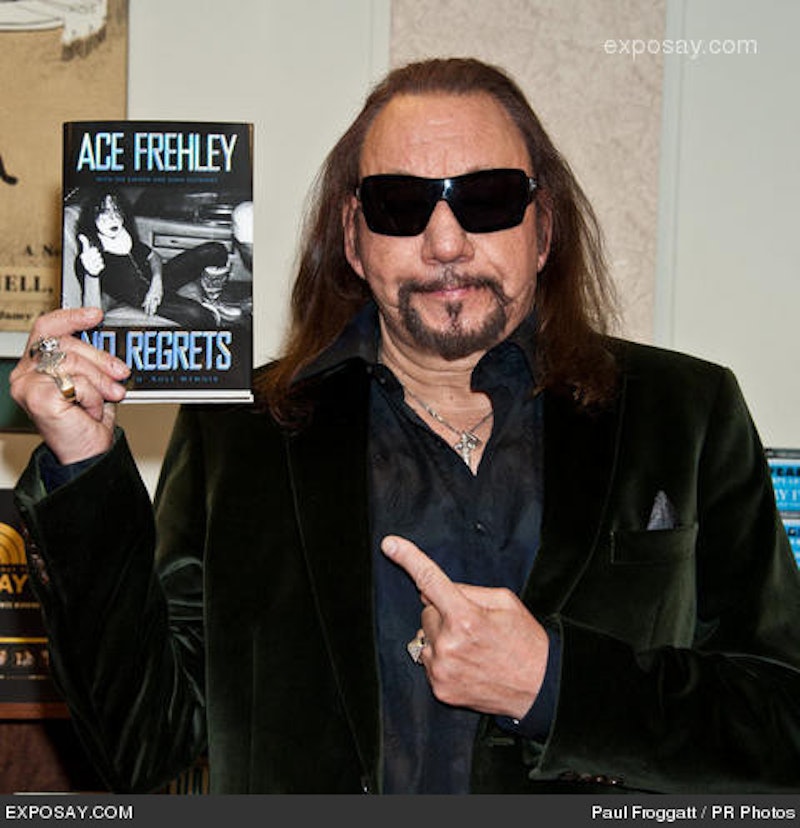 Ace Frehley on Gene Simmons: “I guess having a love of money has nothing to do with cleanliness.” The two of them roomed together on the early tours, when the band had to save on hotels. Frehley: “I was afraid to walk to the bathroom in the middle of the night for fear of stepping in a pile of mucus.” Frehley also says that Simmons has no friends and couldn’t get laid until he became a rock star. On the other hand, Frehley had to get a lift from his mom when he went to audition for the group. He didn’t have a car and his amp wasn’t going on the subway.

Frehley’s book, No Regrets, is 288 pages and he needed two co-writers to get it down for him. It includes a moment in which he reaches out to the spirit of Henry Adams: “I would imagine almost everyone who’s ever written a book about their life experiences has remembered stories after the fact, thinking, Shit, I forgot to include this story, or I should have told that one differently.” The book’s final word is “Awk!”

What the doctor said to Frehley on admission to rehab: “That dosage would kill most people.” What Frehley had to say on checking out: “When I got home from Silver Hill, I felt a renewed sense of commitment to my music and career.” How his marriage was doing: “Jeanette had decided to move on, and was involved in a relationship with a local guy.” That sentence makes up half of Frehley’s entire account of the breakup, the other half being a nothing-burger transition sentence: “A fresh start was in order and part of the process involved legally separating from my wife.” A few pages later Frehley takes 130 words to describe how he scammed a bottle of cough syrup (the kind with codeine) from a drugstore clerk. He and Jeanette had been married seven years.

A crucial episode in the breakup may have been this: Frehley, on Quaaludes, decided to get a limo unstuck out of the mud so it could take him to the airport. He brought his pickup truck to bear on the situation, meanwhile coping with the limo driver’s help. (“‘Idiot limo driver,’ I muttered under my breath. ‘Where do they get these fuckin‘ guys?’”) When done, he found himself getting out of his truck, “dazed and bleeding from the chin.” Before telling the next part, I’ll note that the name of Frehley’s daughter is Monique and that at the time she was a year or so old. The next part: “Jeanette was screaming, ‘Paul! For Christ’s sake, you’re in Monique’s bedroom!’”

Frehley once had the members of KISS take an IQ test. “Just for the record,” he relates, “I scored highest: 163, which is considered ‘genius.’” He recognizes his gifts: “I had always sense a strange voodoo vibe in New Orleans. It was nothing tangible, but being a sensitive guy I could pick up on that kind of shit.” He also sees his limitations: “Unfortunately I’m not a very good sailor even when I’m sober; under the influence I’m even worse.” That comes when explaining what happened to a stranger’s dock.

Several of Frehley’s stories involve cars and police and what he terms his “survival instincts,” as in “My survival instincts kicked in and I made a judgment call.” The judgment call resulted in his driving for an hour or so in the suburbs north of New York City while the police chased him. He got out at a drugstore and called a friend, saying he wanted his car reported stolen. That way, he figured, the car chase could be pinned on the nonexistent car thief. Meanwhile, events progressed outside in a manner that was highly unfavorable: “What I had failed to notice was that the street was filling up with police cars.”

Names of friends: Anton, Buddy, Crazy Joe. Gene Simmons’ first words to him: “You know, that’s pretty fucking rude.” (Frehley was practicing scales while the band was still talking to the last auditioner.) Frehley’s view of Simmons: “one of the most arrogant and egotistical people I’ve ever met.” Frehley’s view of strip clubs: “I never liked the idea of being in a situation where if I got excited, I couldn’t do anything about it.” That’s a very sharp observation; there are times that he understands himself, and here he lays out a key difference between normal people and the sort who become rock stars. Most of us are grateful for whatever excitement we can get, and we don’t worry about what we’re going to do as a result of being excited. The reason is that we’re not going to do very much, whereas an Ace Frehley will form big plans demanding immediate execution.

Nowadays he’s old and his face is a pile of skin. He squats in front of the camera, looking half like a biker and half like a handbag. His associates are the other famous people of the world. Frehley remembers attending Hugh Hefner’s roast, “at which I sat on the dais between Patty Hearst and Deborah Harry.” His book’s main body ends with a New Jersey Hall of Fame Lifetime Achievement Award ceremony for Les Paul. “Along with Les, the honorees included Danny DeVito, Susan Sarandon, Jack Nicholson, to name a few.” The book’s epilogue is an all-star event about sobriety (Frehley is sober since Sept. 15, 2006) at Carnegie Hall, or “Carnegie fuckin‘ Hall!” There isn’t much about his girlfriends or daughter, except that the latter was hurt when cut from Detroit Rock City. Frehley blames Gene Simmons.