The Editor Who Was Supposed to Be a Star

How to make enemies, ruin prose and drive a magazine into the ground. 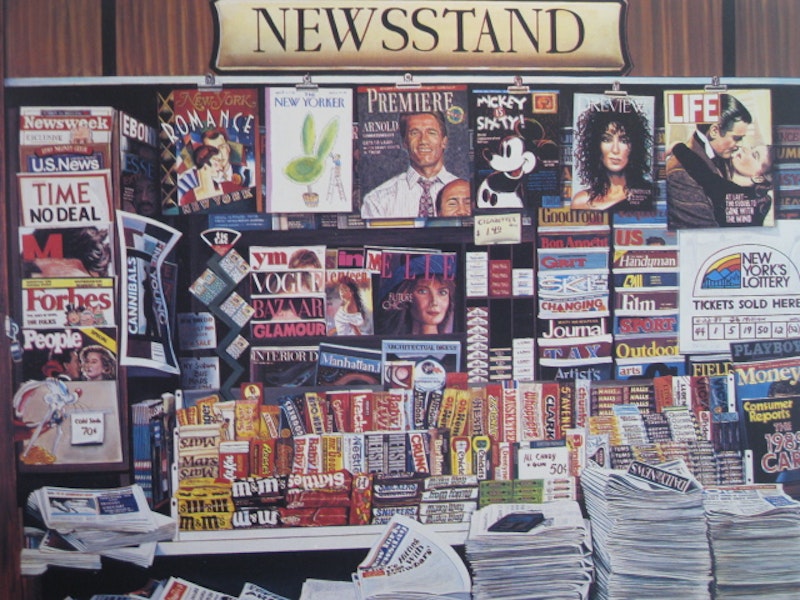 I knew this awful woman about a quarter of a century ago, when I worked at a slick newsstand magazine where she was executive editor. How was she awful? By being a typical big-time magazine editor, I suppose. She delivered pronunciamentos: “Never say ‘as well as.’” She bought copies of the latest prestige best-sellers (The Trial of Socrates and Parting the Waters) and left them toward the front of her desk, spines out for easy inspection. She thought The Big Chill was a good movie. She glowered at me one day as if I were supposed to be her sex toy because I’d dressed up for dinner with my parents. She staged odd scenes that were supposed to be daring. For example, Mel Gibson was on the cover of Premiere and Nora rubbed his picture on her breasts. Liz, a fact checker whom Nora took under her wing, reported this, making a grave face and shaking her head slightly.

Writing up these memories, I tried Googling Nora. This is something I’ve done a few times over the years, mainly because I wanted to make sure she hadn’t become a success. Our magazine was a wannabe, not a heavyweight, so her career was still half a neighborhood from the big time when I knew her. In theory she was the high-flyer on our staff, brought in to slam manuscripts into the dynamite sort of readability that makes the media world sit up. (Turn the pages fast, there’s voltage here!) Nora was supposed to be special, and often enough she was fed to the gills with our little operation. So I’ve checked to see how much specialness lay in her future. Just until now nothing turned up, but this time around there are two items.

One was a blog post in which a freelance writer recapped the history of his local daily. The recap included Nora’s time in charge of the paper’s Sunday magazine, the job she held just before joining the place where I worked. He described the period as a bright spot, in terms that I suspect are typical of freelance writers who have sold a lot to a given editorial regime: smart people in charge, offbeat topics, didn’t have to worry about formula and aiming at the typical reader. But, to lightly paraphrase the blog, Nora’s behavior proved too on-the-edge for the people in charge. That part sounds familiar, though in my experience Nora’s on-the-edge behavior was aimed at junior staff. I guess she had learned something.

The other item was her bio for the site of a journalism school at a big-city university. To tell the truth, I’d thought that somehow she had fallen off the map. I imagined her drinking in a Florida seaside town, the publishing world far away. But the bio says no. In fact she was managing editor of a newsstand slick and spent years in the job. Not bad, and yet… it was a humble, utilitarian slick, a news-you-can-use operation. And now she’s a professor of journalism. So on the whole I’m satisfied.

All right, but what’s my grudge against her? Well, she used to snarl and she used to scream. Pretty simple. Nora’s eyes would jump out of her head; her turkey neck would take on a special life and move in places where a neck normally wouldn’t move. There were people with whom this didn’t work, of course. I remember being impressed when I heard that Teresa, a mountainous girl from Brooklyn, would address Nora as “Blondie” and tell her she’d input the changes for her article when she got around to them. But it worked on plenty of others, including myself. My reaction was to stare. My stomach dropped away to some location far beneath my feet and the office’s dead-green carpet, and for a few seconds I lived in a world where there was no door, no air. But I’m easily shocked.

My standout experience with Nora was this: One day I arrived in her office with some edits to check, and one edit involved a sentence whose meaning had to be straightened out. A politician was doing something or not doing something as part of a wrangle with the legislature. I asked Nora to explain. Her voice shot up—well, first it said, “He’s saying” and then it shot up. Here’s the part where she went loud: “‘Fuck you, I’m not going to do it!’” Years later, and I mean years, I realized what was going on. The door to her office was open, and outside sat the various office girls doing their jobs. Nora was shouting for their benefit, staging a scene in which I was getting yelled at. Why? In general she paid no attention to the office girls, and I don’t think she was trying to impress them this time. My guess is that her copy had been messed around by the magazine’s editor in chief and his deputy, and she was staging a scene to make herself feel better. A scene needs an audience, that’s all.

The magazine was an unhappy place in general. The wannabe was not going to make it, and I think we all came to sense as much. I left for a humble editorial job elsewhere, but I continued to get office news. The editor was kicked out and a new man brought in. He lasted one month; then there was no magazine at all, the owners had given up. But for his one month he made changes. He called a meeting of the staff to review their product with them. “Then there’s ‘Periscope,’” he said, referring to the magazine’s opening section of jazzy short bits. Nora edited that. “I would say,” he pronounced, “that it’s pretentious, poorly written crap.” That’s how his words were reported to me. Supposedly Nora sat straight up as if someone had yanked a rope at the top of her head. No doubt the editor wanted a new executive editor, one who cost less money, and Nora had to be induced to break contract.

“Pretentious, poorly written crap.” I have to agree, and that’s what I most disliked about her. I hated reading Nora’s prose. I remember, toward the end of my time at the magazine, sitting around high and watching my roommate’s black-and-white set. A local commercial came on and it featured some dynamic, screen-filling effect, like crackling lightning, and the titles jumped at you as they told of the sales available at the car dealership. Nora’s style, I thought. Put it on TV and it works for a car dealer. So I was the sort of junior employee who sits around high and thinks bitter thoughts about the office. But it’s not like I was wrong. A lot of slick magazine articles, the crappy sort, are hard to read because of their panting and hyperventilation, their obstacle course of routine hype words. Nora’s style was typical in this regard, and she lavished it on her authors’ prose. When reading a magazine feels like work, I think of Nora, and I’m glad she didn’t get anywhere special. She didn’t deserve to.