Benson and Stabler and Pizza Delivery

The author takes stock of her life at the end of her 20s. 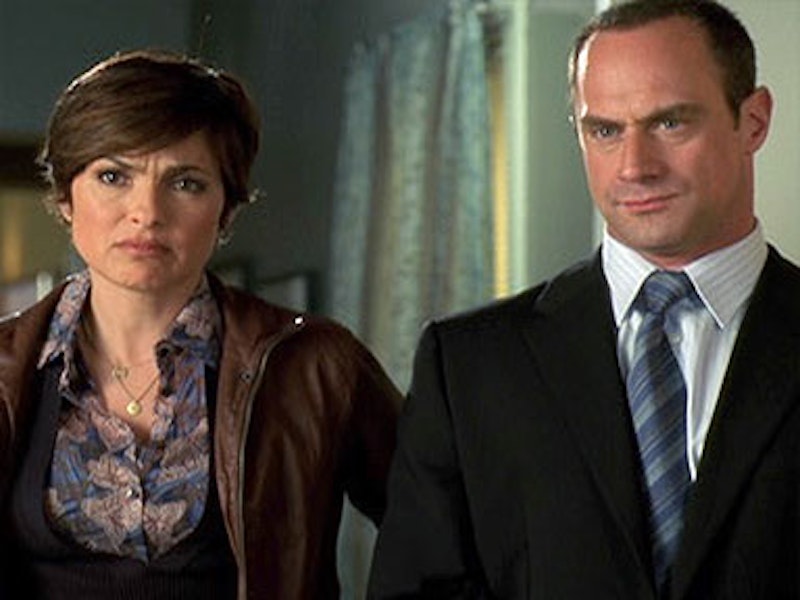 Today I turn 29, and instead of planning an end-of-my-golden-years birthday blowout, a final fling before my go-to excuse for the past year (I’m only 28) no longer applies, I’m planning a quiet evening with Benson, Stabler, and their fellow detectives at the NYPD Special Victims Unit. If I’m feeling wild, I might order a large pizza that I’ll eat alone and then regret. It’s not that I’m too old to party, it’s that I’ve been taking stock of my life, and I’m not feeling great about my progress as a human being. The facts: the most valuable thing I own is a gift certificate for a massage that I'll never use because I need something to look forward to; the longest relationship I’ve had in five years was holding a girl’s hand during a viewing of Milk; I’m an underpaid editorial assistant with a boss young enough to be on the family cell phone plan without embarrassment; and I’m still on the family cell phone plan, with embarrassment. I’m in no mood to party.

This concern about my personal development is made worse by the fact that I’m a twin, and my twin is a legitimate grown-up, a word that doesn’t feel like it applies to me even though I am, technically, old enough to be a grandmother. My twin sister doesn’t just have a high-paying job, she gets five weeks of vacation a year—vacations she spends surfing in Mexico, climbing volcanoes in Hawaii, running marathons in 40 m.p.h. headwinds in San Francisco, or, for a more relaxing experience, going on hut trips, a term that reminds me of a dreadlocked ex-roommate who built a menstrual hut in our backyard, but which apparently means skiing into road-less areas of the Rocky Mountains and sleeping in a yurt for several days. Even worse, my sister is getting married. Her engagement is a recent development and not a surprise: she and her boyfriend live together and walk the dog together and go to dinner with other couples. But even though their engagement was expected, it gives me further anxiety about my own development. If I met someone I’d like to marry today, it’d be years before I would be ready for such a commitment. Toss in the fact that not only am I as single as the day I was born, the state where I live just passed a constitutional amendment banning gay marriage, and so it looks more and more likely that I will never catch up to my sister, much less beat her, which is really the ultimate goal with family.

So what happened? Why the arrested development when my siblings both have financial stability, solid relationships, and pay their own phone bills? I can’t blame my childhood, which was easy and loving. My parents are happily middle-class, waited to have children until they were ready, and sheltered us from harm but not experience. The worst thing that happened to me as a child was failing swim lessons at the age of 10, but still, I’m as developmentally delayed as an orphaned monkey with a tea towel for a mother figure. By all indications, I should be a successful adult. I was a good student, somewhat of a mischief-maker but never to the point of suspension or juvie. I never lacked for friends or hobbies and my only traumas were small—being cast in the role of an unspeaking male in a school play, driving a rust-colored 1986 Ford F-150 that was built to haul bales of hay and was decidedly not cute.

But then, everything changed. There were the usual rites of passage: going away to college, getting my own place, my first girlfriend, my first break-up. Then there were less common rites of passage: wrecking my bike badly enough to land in the hospital, where I lied about identity because a) I didn't have insurance and b) I was drunk; sneaking out of the hospital with a neck brace before the cat scan results were back; hitchhiking home in the middle of the night still wearing the neck brace; getting fired from not one, not four, but five jobs; dropping out of graduate school after one year and $20,000 wasted, and—the big one—an incorrect diagnosis of bipolar disorder. Like everything else in my 20s, that was my fault. I went to a psychiatrist after the bicycle accident because I knew something was deeply wrong, but I didn't want to attribute it to the obvious culprit, alcohol, which I loved more than my family, my friends, or myself. When I told the doctor about my problems—my inability to keep a job, my failed attempt at graduate school, staying with women long enough to learn the color of their underwear but rarely their last names—he asked me series of questions. Did I talk too fast or too much? Always. Did I engage in risky or impulsive behavior like promiscuity? As often as possible. Did I sleep too much or too little? It took a solid 12 hours of shut-eye to keep this machine running. Was I easily distracted? Sorry, I wasn’t listening. Did I experience fatigue or loss of energy? Feelings of worthlessness or excessive guilt? Diminished ability to think or concentrate? Check. Check. Check. There, in a doctor’s office with degrees framed from Harvard and Penn, I learned that I was bipolar. I accepted this diagnosis with relief: the problem wasn’t that I was a drunk, which would require behavioral changes on my part; the problem was that I was sick. The doctor wrote me a couple of prescriptions and I left his office with the new knowledge that I was crazy.

No one believed me when I told them, gravely, that I was bipolar, but I was committed to my diagnosis. I took my pills (Lamictal, Celexa) every day and waited for life to get better. But life didn’t get better. Highlights from this period include accidentally burning down my porch, getting caught smuggling a urine sample into a doctor’s office, and getting pulled over by a cop while steering with my knees and rolling a joint in my lap—something I got away with only because a Corvette went spending down the road at 95 miles per hour as he was about to search my car. I took my medication but still couldn’t keep a job or a girlfriend and my electricity was perpetually about to be cut off. I was miserable and the more miserable I became, the more I drank, and the more I drank, the more miserable I became. I thought about drinking constantly, the way you do when you’re newly in love: obsessively, from the moment I woke up with nausea and the shakes to the magic hour of four o’clock, when my neighborhood bar opened, to the last moments of the day, when I stumbled through my house shedding clothes behind me and passing out naked, malnourished, dirty, and very unhappy. The truth, something I wanted so desperately to ignore that I paid for medications that gave me nothing but a persistent yeast infection and unexplained weight loss, was that I wasn’t bipolar: I was hungover. And that is why I am poor and marginally employed and forever single and forever behind my sister: I spent most of my 20s wasted.

On some level, I always knew I would one day reach the point when I’d have to admit that drinking was not just a problem but the problem. I remember at the age of 16, soon after I got drunk off half a Solo cup of warm keg beer, thinking that I never wanted to be an alcoholic because then I’d have to be a recovering alcoholic and recovering alcoholics can’t drink. It was always there inside of me, the desire to get as fucked up as possible, jobs and relationships and progress be damned. Once I accepted this, life did get better. I’m not entirely sober now—I still drink on occasion, but never enough to pass out or earn a DUI or burn down a porch—but now I consume more tea than bourbon. These days I will do anything to avoid what Kingsley Amis described as a metaphysical hangover—when you feel like you have suffered a minor brain lesion, are convinced that you are bad at your job, that your family and friends are leagued in a conspiracy of barely maintained silence about what a shit you are, that you have come at last to see life as it really is—even if it means spending my birthday with Benson and Stabler and pizza delivery.

At the end of my 20s, I may be as poor as a boxcar child, but in a sense, I’m also rich. After nearly a decade of ingesting more booze than water, I still have friends and family and a twin sister who cried when she asked me to be her maid of honor. I'll spend the last of my 20s with plenty of regret, but at least I’m sane, usually sober, and there’s still time to catch up. After all, I’m not 30 yet.