Knickers In A Twist

The Arthur C. Clarke award for the best science fiction novel published in Britiain has stirred up a bit of controversy this year. 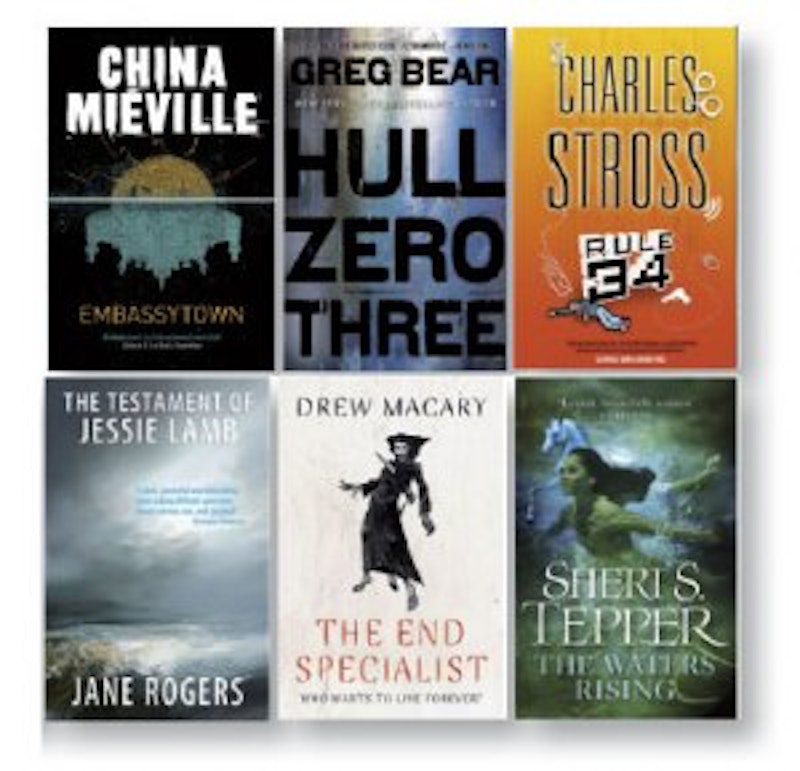 It’s been a terrific few months for controversies about literary prizes. Most notably, the Pulitzer Committee decided not to give an award for literature this year. The last Man Booker prize was marked by debate about the value of a book’s readability. But between those two spats, a tempest blew up around a quite different award.

The Arthur C. Clarke Award, first presented in 1987, is given each year to the best science fiction novel published in Britain. This year’s shortlist was announced on March 25. On March 28, author Christopher Priest published a blog post that was a scathing attack on the list and the award’s judges. Priest described the shortlist as an outrage, argued that only one of the six shortlisted books was worth being nominated, and called for the judges to be fired and the award to be suspended.

Priest was pointed in his critique of the individual selections. He began his evaluations by praising The Testament of Jessie Lamb, by Jane Rogers, which had also been longlisted for the Man Booker Prize. The book is “something we should be proud of,” said Priest, the “we” in that sentence presumably referring to the British science fiction community. It’s an oddly resonant phrase, almost too heartfelt both in its assumption of a common audience with common values, and in the way it seems to beg for approval—to seek pride in another person’s writing; not so much reflected glory as the transitive establishment of literary worth.

At any rate, Priest went on in sterner form. China Miéville’s Embassytown “contains many careless solecisms,” he wrote, and Miéville himself “does not work hard enough” and “is defined and limited by the expectations of a genre audience.” Priest actually gives Miéville some backhanded compliments, saying that Miéville isn’t “a poor or failing writer.” But, Priest says, “unless he is told in clear terms that he is under-achieving, that he is restricting his art by depending too heavily on genre commonplaces, he will never write the great novels that many people say he is capable of.”

For Priest, the point of the individual writer award is presumably a confirmation, a canonization. A sign of approval. Miéville’s already won the Clarke award three times, “which is not his fault,” Priest allows, “and one assumes not his intention.” Still, to win again, Priest seems to think, would lead Miéville to an excessively slack critical self-assessment. More, “a fourth award to this writer would send out a misleading and damaging message to the world at large: it suggests that not only is Mr Miéville the best the SF world can offer at the moment, he is shown to be more or less the only writer worth reading.”

After Miéville, Priest got brutal. “It is indefensible that a novel like Charles Stross’s Rule 34 (Orbit) should be given apparent credibility by an appearance in the Clarke shortlist,” he stated. “Stross writes like an Internet puppy: energetically, egotistically, sometimes amusingly, sometimes affectingly, but always irritatingly, and goes on being energetic and egotistical and amusing for far too long. You wait nervously for the unattractive exhaustion which will lead to a piss-soaked carpet.” (In response, Stross is now selling Internet puppy t-shirts.) Greg Bear’s Hull Zero Three is attacked for being too traditionally science-fictional, and too stylistically uninventive: “The paragraphs are short, to suit the expected attention-span of the reader. The important words are in italics. Have we lived and fought in vain?”

Drew Magary’s The End Specialist is judged by Priest to be again too similar to previous works: “this is not a literature of reminders, of retreads, of slightly updated versions of existing works. Speculative fiction is for the present, on the cutting edge, looking forward, not back.” Of Sheri S. Tepper’s The Waters Rising he simply says, “How can one describe it? For fuck’s sake, it is a quest saga and it has a talking horse. There are puns on the word ‘neigh’.”

Priest concludes that the judges were “incompetent,” and, in tandem with an overall subpar year in British SF, this led to failure: “They failed themselves, they failed the Clarke Award, and they failed anyone who takes a serious interest in speculative fiction.” For Priest, all the jurors were equally culpable. “A jury decision is a joint and collective decision... everyone on the panel is responsible for the outcome.”

Priest’s suggestion was that the jury should resign, this year’s award be suspended, and next year’s award cover this year’s books. He did begin his post by naming several books he felt deserved to be on the shortlist—Ian R. MacLeod’s Wake Up and Dream, Simon Ing’s Dead Water, Adam Roberts’ By Light Alone, and Lavie Tidhar’s Osama. Priest himself had an eligible book, The Islanders, which he volunteered to withdraw from consideration for the doubled award.

I don’t know the inner workings of the Clarke Award, or of the British science fiction scene. But so far as I can see, there was no real chance of Priest’s suggestion being followed (the Guardian in fact had an official rejection of Priest’s proposal by the award’s director, Tom Hunter, on March 29). I doubt Priest expected his idea to have traction. I think he was trying to start an argument—about the Clarke Award, but also about literary values in science fiction. If so, he succeeded, at least in part.

A sprawling, intense discussion was launched by Priest’s post. Among some of the more prominent responses: critic and columnist Damien G. Walter wrote a response claiming Priest was motivated by jealousy of the stature now accorded to Priest’s friend J.G. Ballard, and was stung by the fact he hadn’t been accorded the role of literary elder statesman in or out of genre. Short story writer Nina Allan, on the other hand, agreed with Priest, claiming that the Clarke shortlist privileged traditional SF over work aspiring to literary quality. Novelist Cathrynne Valente didn’t entirely agree with Priest, feeling that the shortlist was at least representative of the state of the genre, but appreciated the fact that someone was prepared to defend literary values so publicly and vociferously (and also observed that a woman who did something similar would receive much more vicious responses than Priest was getting). Novelist and critic Jeff VanderMeer felt that the personalization of Priest’s attacks, and his dismissal of Tepper, “poisoned the waters” so that a valid point was undermined.

It’s true that Priest’s vitriolic comments about specific writers and jury members overshadowed the broader discussion. Certainly the reaction within the SF community, both in Britain and around the world, was heated. Hunter told the Guardian that there was one tweet per minute about the controversy for six days—a respectable amount of attention for a dust-up over a literary award.

People care about science fiction, and apparently they care about awards, or at least this one. The Clarke Award is seen as a prize that aims to reward ambitious fiction and conscious literary art. But what that sort of art is, exactly—that’s something difficult to quantify. You know it when you see it. Except everyone tends to see things differently. The Clarke Award has built up a considerable reputation for reliably recognizing high literary ambitions within a science-fictional framework. But Priest isn’t alone in suggesting that the Clarke’s been falling off in recent years; that the past few shortlists haven’t been as impressive as earlier selections.

Sixty books were submitted for the 2012 award. There’s a general agreement that Priest was right to say that this year’s field of SF was weak overall. There’s also a fair amount of agreement, among people who venture an opinion, that the Clarke shortlist didn’t necessarily pick the best books. That is, a lot of people think Priest was basically accurate. Does it matter?

Priest clearly has a high opinion of what awards in general, and the Clarke in specific, can and should do. His comments on Miéville are an example of that. It’s not just a question of whether Miéville’s current book is the best of the present field; it’s a question of whether Miéville’s won the award too many times already. It’s a question of what the award says above and beyond “this is the year’s best book.” For Priest, the administration of an award involves a responsibility above and beyond the presentation of a prize or of money to an individual author, and beyond the ability to slap the tag “award-winning” on a cover blurb. He’s arguing that the presentation of the Clarke Award specifically has a responsibility to art, literature, and SF literature, as a whole.

At the same time, Priest’s got an equally elevated idea of what science fiction can be. He doesn’t just criticize these books for being bad—but for being retrograde. For being safe and backward-looking. It’s almost a paradox: he’s attacking a genre award for rewarding self-consciously genre fiction.

There’s a romantic feel to Priest’s jeremiad; an idealistic vision of science fiction as vital literature, of the Clarke Award as the canonizing of new and grand novels. He’s not entirely wrong. But it’s worth noting that the violence of Priest’s prose is the violence of betrayed idealism. I wish that the responses to his piece had shown some of that same idealism. As Valente observed, you don’t have to agree with Priest to be thankful that someone will stand up for good writing.

In the end, the award was given on May 2. The winner, amusingly enough, turned out to be Jane Rogers’ The Testament of Jesse Lamb—the one book Priest felt belonged on the Clarke shortlist.  “The judges vindicated themselves after an extremely dodgy process,” he told the Guardian. “The right book won. The only novel that shows real literary ability.” It’s that fixture of genre writing: a happy ending. At least for this year.