Now there are 72-hour ceasefires in Baltimore like it’s a warzone. 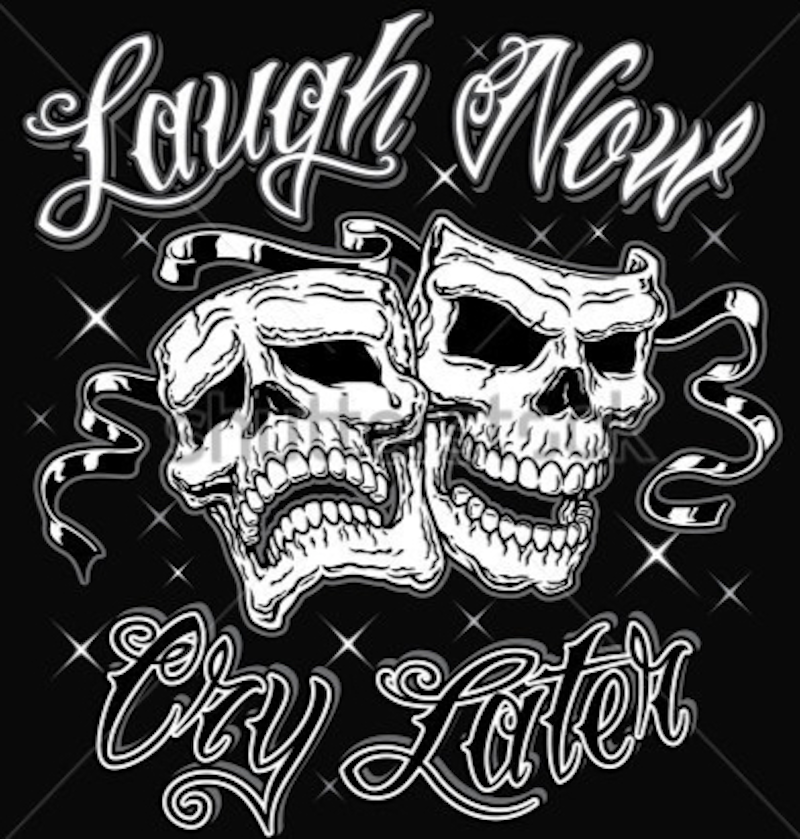 There's an old John Prine song, "Please Don't Bury Me" from 1973's Sweet Revenge album. I loved it so much I covered that song in the 1990s. It still cracks me up every time I hear or sing it. It's about waking up in the morning, putting on your slippers, slipping on the floor, hitting your head and bang your dead. I’d recite the lyrics, but it’s better if you check it out on your own dime. I guarantee you’ll laugh. If you don't even chuckle, then you have zero sense of humor. To me that’s all that matters anymore. Laughter is the best medicine. It’s hard to get the giggles today with all this bullshit going down. We should  endure the impossible and belly laugh like fools. Until your sides hurt, you can't breathe, you’re red in the face, tears streaming down your cheeks, and for the grand finale you pee your pants in an unstoppable, hardcore convulsive laugh riot.

The song continues, please don't bury me in the cold ground, have them cut me up and pass me all around. My sentiments exactly. I’m on the organ donor list. It says so on my driver’s license. The only problem is at my age my vital organs aren't so vital anymore. My eyes are shot, my lungs too, don't even want to think about my kidneys and liver. As for my heart, only the devil knows. I don't know who’d want my worn-out stuff. It's said that laughter is a painkiller. Some say comedy isn't pretty. Comedians suffer from depression more than nine out of 10 dentists and doctors who recommend watching The Three Stooges or cartoons to laugh away pain. I'd rather have morphine along with my Three Stooges but as opioid epidemic looms large, fat chance you'll find a doctor who’s brave enough to write a script for anything stronger than baby aspirin.

Living with swords dangling over our heads isn’t fun. Worries about shootings in public places. Homegrown terrorists or a disgruntled ex-employee looking to even a score. Could be a lone wolf in a large truck careening down the sidewalk taking out whoever's unlucky enough to be in their path. How about a chainsaw-wielding maniac run amok in Walmart? Idiots with bombs in their shoes or underwear boarding planes to become martyrs who receive 72 virgins when they get to paradise, or wherever mad bombers go. What do female bombers get? They are reassured if they go on a suicide bomb mission and blow themselves to smithereens they’ll become beautiful in paradise and get to be with their husband for eternity, who already has 72 virgins. Sounds like a raw deal for women terrorists.

Church shooters, drug shooters, gang shooters, school shooters, shooters shooting just for the hell of it. Hunting humans, gangs of roving kids beating people with bats and sticks. I guess poor kids can only stomach so much of affluent folks having too much fun and throwing money around. They see what they don't have and resent these interlopers. I don't condone the violence but I sure know where they're coming from. Even I get disgusted with all the conspicuous consumption I see. If it weren’t so commonplace it’d be downright embarrassing. It’s a shame that the gentry feels so above the downtrodden rabble. Now there are 72-hour ceasefires in Baltimore like it’s a warzone trying to have a truce so they can re-up on ammo and supplies. Why do we have all these mass shootings, bombings, vehicle manslaughters, serial killers, suicide bombers, drug overdoses, and murder for no reason at all?

Is it the economy, racism, or do people just enjoy shooting guns at other people? Like the little schoolgirl mass shooter, killing two students and wounding eight more. When they asked her why she did it she replied, "I don't like Mondays." Later the band Boomtown Rats made a hit song out of that line. “I don't like Mondays" was a no. 1 single on the UK charts in 1979. It seems silly now but that was the reaction to a kid shooting a bunch of other kids for no good reason. Make a song about it. Turn it into a punchline for a sick joke.

North Korea has enough uranium to deep fry the atmosphere. We’ll all be glowing in the dark and eating leftover civil defense crackers stockpiled in underground fallout shelters since the last big bomb scare way back when. Those pesky Russians and their evil empire spewing propaganda. It was okay when we dropped the Atom bomb on Hiroshima and then another on Nagasaki. It's only fair we get a taste of that nuclear bang for our buck right here. Don't want to be a prophet of doom but you can't hide in a dark basement forever. Sooner or later you've got to go outside and breathe the fallout. Gaze at the red sky of terminal night. And while you survey the aftermath, try and laugh like a lunatic at the total destruction. Laugh at the madness, laugh at those who’d enslave you. Laugh at everything they say. Laugh at the insane presidents, pompous preachers, greedy bankers, corrupt policemen, bullshit salesmen, doctors playing god, bottom-feeding lawyers, laugh at them all until they become less than nothing. Steal away their power. Replace the fear with a barrage of constant laughter. It’ll numb the pain and stop the tears until the next round of sick news comes along.