It's the summer of weddings. 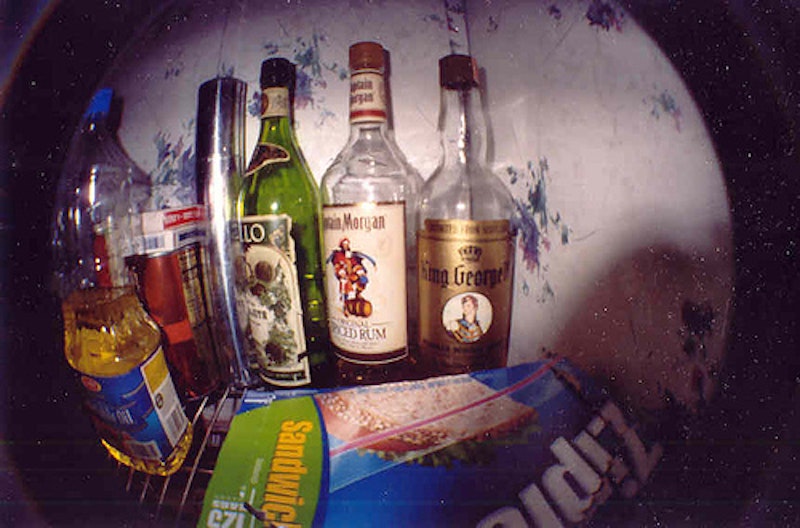 I remember as a kid, maybe seven or eight, I went to a family reunion in Wellsboro, PA, near where my grandfather lived for so many years. I’d spent the afternoon in the pool and was walking back to the motel room with my dad when one of my uncles, drinking on his balcony, yelled out, “Hey Denny, want a shot?” My dad laughed. “No, no. I take one of those and I'll be on my ass!” I didn’t have my first drink until 10 years later but something about that always stuck with me; I think my dad taught me the most important stuff when he didn’t think I was listening. Now he always cautions, “Stick to beer”—though he drinks almost nothing anymore but whiskey and coke.

My friend Brad’s wedding is less than a month away, so this past weekend Brad, some old high school friends and I honored this in the traditional way, with a three-day marathon of alcoholic self-abuse. I’ll spare you the more debauched details, mostly because some of those old high school friends have actual important jobs now (one’s an assistant DA, another’s a cop—neither of which, thankfully, had to act in any official role), but you can probably guess what went down: bars, gambling, strip club. Me and Brad and a couple of other guys who made it through the whole weekend were drunk for pretty much 72 hours and how no one ended up in the hospital is beyond me—at one point I woke up on Brad’s roof holding a fifth of Jack Daniel’s, way too near the edge of a 40 ft. drop.

Realistically, nothing about Brad’s life the day before his wedding and the day after will be any different; he’s been with his fiancée for five or six years and they own a house together. Still, tradition is important—though I admit I don’t understand weddings at all. Why spend $30k or more on one day of your life when all you really need is a marriage certificate? It doesn't cost anything to go to the courthouse. But this is the summer of weddings for me; I've been to two already and I'll be at another one on Saturday. Somehow I made it to 28 without buying a suit and now I own two.

There's nothing quite like taking a shot at 10 a.m. to put your life in perspective. The whole weekend I kept reminding myself that none of us are kids anymore. "No, we're not old, but..." was how it went around. My friend Joe would say something about his six-year-old daughter and I'd look at him, confused—Doesn't he still live in that shitty apartment in Waynesboro? There was a sort of weary sentimentality to all of it. Not that any of us, I think, would want to be 19 or 20 again—we were lost back then—but nearing 30 you start to realize some of the possibilities are gone; maybe you have a wife and kids, a mortgage, a 401k. Meanwhile I still remember using my savings bonds to pay bar tabs. If I had $10 or $15 it meant a pack of cigarettes and a 12-pack and things were set. Now I think about how my dad sits on the porch most nights and talks on the phone for hours, to his brothers or some old friend. It’s 28: the year of weddings and putting my shit in order—at least once I work past the hangover.