A Privileged Black Man’s View on the World

Friendship should be earned, never assumed on the basis of race or sexual orientation. 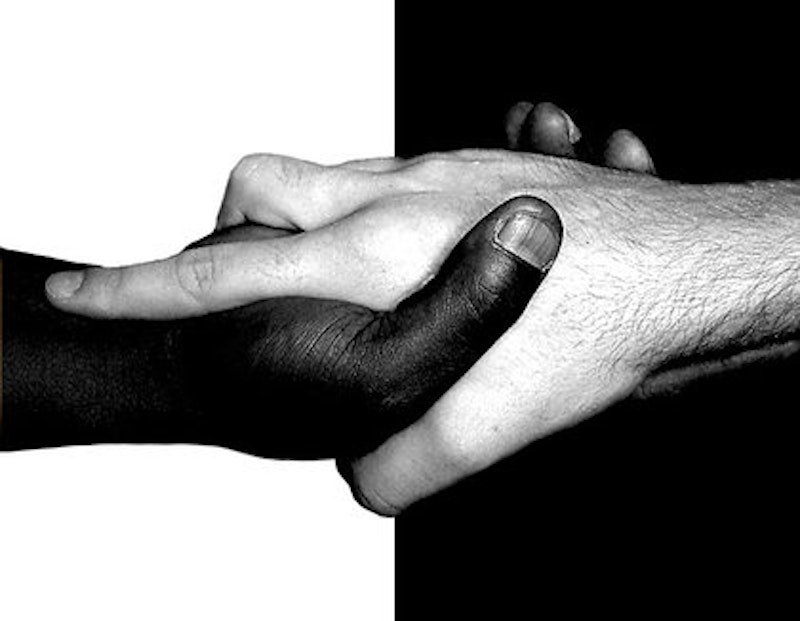 I have two types of ignorant friends: the white ones, who have one token black (or gay) friend and therefore classify their social group as “diverse,” and the majority of my black friends, who embrace the social walls they put up against whites due to their own discomfort. Each perspective is a mess in its own way. I’ve had this debate before with my college roommate, and it’s recently come up again with new friends. One in particular, after hearing my justification for my social habits, calls me a “white girl stuck in a black gay man's body.” I disagree. But because I don’t place social caps on people outside of my race, I am not “black” enough. Let me explain.

When I walk into a room I own it, because I primarily see myself as Chaz: a talented, intelligent, and articulate person with significant ability to connect with others. I succeed in charming you because I don’t go into the situation thinking of the outward biases that you may have. The color of my skin, my sexual orientation, and my socio-economic class (flat broke, at the moment) are secondary to my individual talents, passions, and qualities. Those elements combine with the strong, black, gay, working-class man that I’m categorized as, but I value my personal traits first and foremost. My outlook on the world is not defined by cultural biases, which is just thinking of the negative before the positive; I learned early on that it’s a black social privilege to appeal socially to both the majority and the minority social groups.

Bias, bigotry and racism are always going to exist, but living a life where you’re constantly focusing on your social gains as a rise for “black power” eventually isolates you from collaborating with a wider social circle.

This issue of being organically confident in a social setting comes up a lot in my approach versus that of some of my “peers.” I started a new job at a country club, which surprisingly has an incredibly diverse staff but only one (obviously) gay man beside myself. Every time we have a conversation I either strongly disagree with most of his points, or am just annoyed with how he elbow pats me, giving me this tight-lipped “okay girlfriend” smirk every time we chat. He assumes we’re Sex and the City gals before we’ve even gotten the chance to have a full conversation and establish a (working) friendship. This bothers me. We just don’t click. I’m taking a leap in saying he thinks we’re friends because I am the new token gay man in the department, but he’s not the only culprit as two additional staff members (supervisor included) assured me that “Paul” and I will get along. Why? How can they assume that Paul and I will have any more good times at work then I would with hetero-Harry, as I know neither of them at the moment?

I understand the assumption, it’s an obvious mistake we all make, but what I don’t get is why people assume I am okay with them expressing it. I’m not saying there’s something wrong with establishing a friendship because you feel you’re “just like” someone, but the other piece, the organic bond that serves as the foundation for the establishment of a friendship, has to be there too.

It bothers me when black people do it, but it bothers me more when gays do it. Friendship should be earned, never assumed on the basis of race or sexual orientation. Contrary to popular belief, there are a lot of people who are "just like me” that I don’t desire to strike up a friendship with. Call me harsh, or not “black enough,” but I don’t live in a world where I feel bonds need to be formulated based on supporting your fellow minority. Yes, I support the broader “community,” but friendship is much more intimate to me than those basic intersections.

This is what I have to say to my fellow community members:

Are you going to live in a world where you’re always contentious about what your disadvantages are or how your race is constantly oppressed? Or will you use the power of optimism to rise above the past and place yourself on equal ground, so that you’re not deflecting potential connections. This attempts to eliminate the opportunity for “them” to mistreat, judge, or categorize you in social interactions, because you let them know that you’re more than just a “gay black male.” I’m not saying that society has advanced enough that there’s no more bias, but we can agree that bias is severely impacted by representing your individuality as well as your cultural or ethnic identity. I’m trying to prove that more good than bad will occur when we form no barriers in socializing with white people. If you’re a black person living in this country, you have a story about discrimination. But everyone has a story and it’s possible to connect on the grounds of your life experiences instead of just assuming “they don’t understand.” No one likes the “you don’t know my life” defensive diva in the bunch. She’s too tough on the outside for anyone to see what’s on the inside.