As They Were: Charles Cushman’s Photos of a Vanished Metropolis

From the University of Indiana digital library. 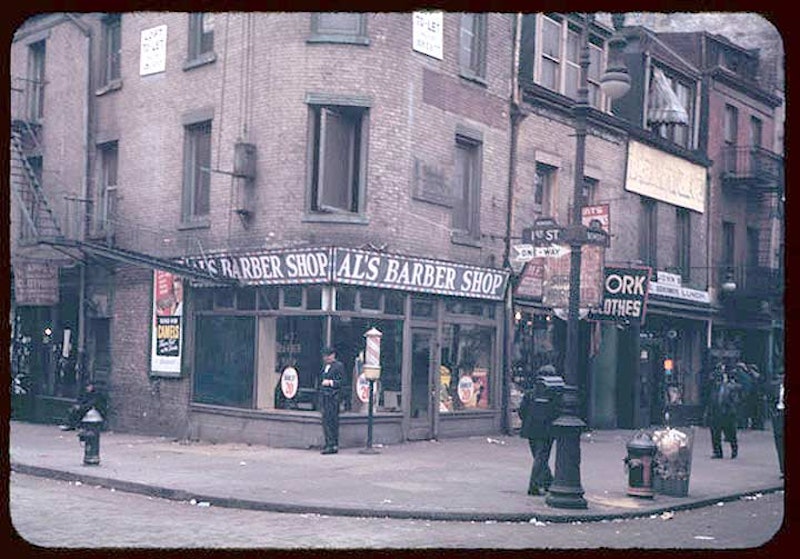 The scenes depicted seem to be from about 1940 through 1960, a time that I find dimly-remembered though not impossibly ancient. There’s just enough familiarity for comfort.

These treasured photos were taken by Charles W. Cushman, who donated his collection of approximately 14,000 color slides to the University of Indiana. They published the entire collection, including Mr. Cushman’s notes on the pictures, in their digital library, which is accessible here. The collection contains approximately 150 photos of New York City snapped between roughly 1935 and 1960, a time when color photography was by no means frequent.

The above photo is labelled Bowery and 1st Street, and the time is likely the mid-1940s. In that era, the Third Avenue El ran up The Bowery, but for the most part, it left the sidewalks in full sun. 295 Bowery, McGurk’s Suicide Hall, is just out of the picture on the right. This entire block is now dominated by the gleaming Avalon Bowery Place.

Note the lack of an E or W on the 1st Street sign. There’s no West 1st Street; however, modern addresses have this as East 1st and present-day street signs reflect that. This is the first in a sequence of numbered streets in Manhattan and The Bronx that continues north to the Yonkers line. The highest numbered street in the sequence is West 263rd Street in North Riverdale.

Also note that the top of acorn-style glass reflector on the lamppost luminaire is painted black. This was likely in response to World War II air raids. Subsequent luminaire designs forced the light to shine below the post and not diffuse upward.

There’s a barbershop on the corner, followed by a work clothier and then a lunch counter. A second clothing outlet can be seen on 1st Street. 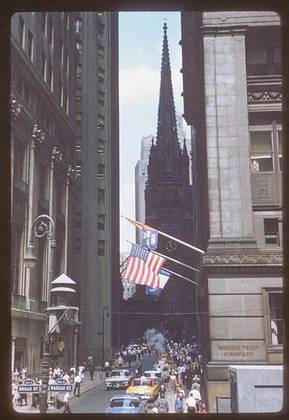 This iconic scene depicts a view west on Wall Street from the corner of Broad where it meets Nassau. A frequently seen accessory on NYC lampposts in the Fab '50s and on into the Swinging '60s were large, bulky air raid sirens during the height of the Cold War with the Soviets, such as this one seen at Wall and Broad and Nassau Streets, in a different era when traffic was permitted on America’s Main Street of Capitalism. We had one at the 68th Precinct NYPD station at 5th Avenue and 86th Street in Bay Ridge (since moved to 65th Street) and you could hear it sitting in class at St. Anselm School blocks away. The larger the siren, the louder it was. The last one I knew about was mounted on the roof of the Sutter Avenue station on the L train Canarsie Line. 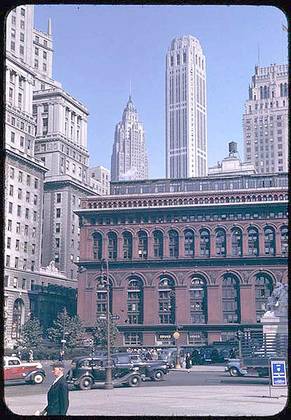 This photo, taken looking west on Bowling Green at Broadway, depicts the Romanesque Revival New York Produce Exchange Building, constructed by George B. Post in 1884. It was demolished in 1957 and replaced two years later by 2 Broadway (which is really on Whitehall Street, but it scored this more prestigious address). Obviously, the Produce Exchange was demolished before the modern-day era of preservation arrived in 1964 with the tragic loss of Pennsylvania Station uptown.

In the center background, we see 70 Pine Street, formerly the Cities Service Building, now the American International Building (insurance). It has 66 floors and was completed in 1932 by architect Henry Dougherty, making it a contemporary of the Empire State Building. It was the first skyscraper featuring double-deck elevators. At right is the 54-story 20 Exchange Place, originally the City Bank Farmers Trust Company Building, built by Cross and Cross 1930-31. The entrance features bronze doors decorated with images of transport vehicles and, if the guards permit, check out the domed lobby’s gold-toned floor and marble, mosaics, and paintings. 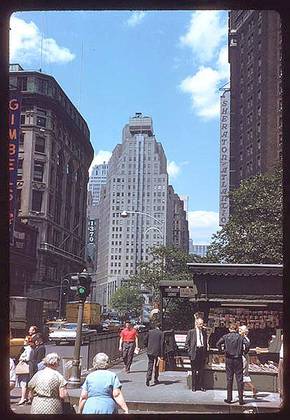 I tend to date NYC pictures by what kind of lampposts appear in them. For example this photo can be no earlier than 1950, since that’s the year that the now-familiar aluminum 8-sided poles first appeared. We’re in Greeley Square, 6th Avenue (oops, Avenue of the Americas) at West 32nd Street, looking up the street at the office tower that replaced the New York Herald Building. Its bellringers, Stuff and Guff, and the statue of Roman goddess Minerva were removed and placed in Herald Square, where the bellringers still struck the midday hours till very recently.

At left is the 1901 Saks & Company Building, later clad in impenetrable black in 1982 as many fashionable NYC women are. Gimbels, on the immediate left just out of the photo, was remodeled as the Manhattan Mall in 1988. (When I worked in the area, I savored my lunchtimes in the 7th-floor food court. At length, it was decided that the 7th-floor view was too good for area workers, the 7th floor was converted to offices, and the food court went to the basement.) 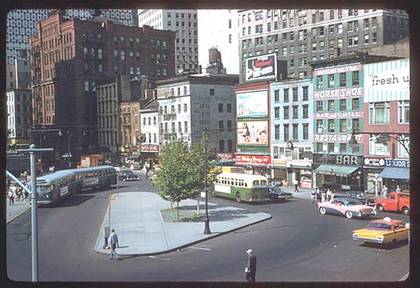 These 1960 views were likely taken from the old South Ferry terminal building; it burned down in the 1990s and was replaced by a gleaming new glass terminal in 2005. This was thought for many years to be the site where Peter Minuit, Director General of the New Netherland colony from 1626-1633, purchased Manhattan Island from native Americans. Further scholarship has determined that the exchange took place further north, where Inwood Hill Park is now.

All these buildings have been wiped off the map, with the exception of the large brownstone building at left. This is the 1886 US Army Building. For what used to go on there, we’ll let Arlo Guthrie explain it for you:

They got a building down New York City, it’s called Whitehall Street, where you walk in, you get injected, inspected, detected, infected, neglected and selected. I went down to get my physical examination one day, and I walked in, I sat down, got good and drunk the night before, so I looked and felt my best when I went in that morning. `Cause I wanted to look like the all-American kid from New York City, man I wanted, I wanted to feel like the all-, I wanted to be the all American kid from New York, and I walked in, sat down, I was hung down, brung down, hung up, and all kinds o’ mean nasty ugly things. And I waked in and sat down and they gave me a piece of paper, said, “Kid, see the psychiatrist, room 604.

The US Army building received a green glass cladding in 1986. On the right are a number of very old buildings, all of which have taverns on the ground floor. The Horse Shoe Bar, The White Rose Bar, and Harmony Cafe, at Whitehall and South Streets, had been banished by 1969, replaced by #3 New York Plaza. There were no shortage of libations at South Ferry in the fab Fifties, that’s for sure.