Halt in the name of the Gray Goo Generation. 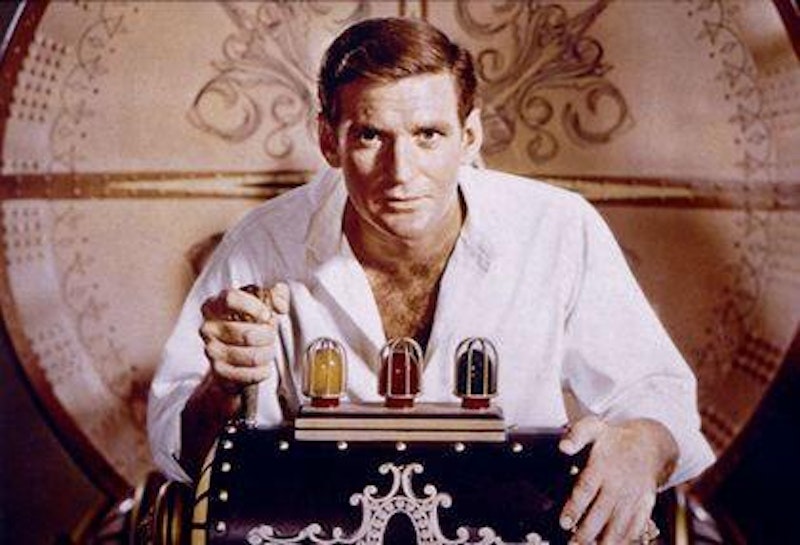 In 1987, approaching 40, I got it in my head that teenage spinal fluid would keep us Boomers forever young. And as a bonus, it would taste like a blueberry margarita.

Hold the phone. I’m no Nostradamus. I could very well have "My Sweet Lord"-ed this scenario from the flotsam and jetsam of dopey dystopias floating in my kid science fiction addict’s brain. But then, my point has nothing to do with prescience or George Harrison-style sampling.

Prompted or not, I got this goofy idea and drew a couple of pilot episodes of a comic serial that wore me out by the second strip, scratching-in all those high rise towers one Rapidograph technical ink pen line at a time. Keying off the Japanese film classic Destroy All Monsters, I changed the title’s imperative to Arrest because it’s funnier, and swapped out the "M" word for the "T" word because, really, haven’t they always stood for the same thing—figuratively, as well as literally, the Teenage Werewolf?

I exhumed this conceit because not so long ago online I came across one of those throwaway medical news items, no kidding, about teenage spinal fluid being evaluated as a longevity supplement. True or false, I couldn’t care less. I felt vindicated. And I’m getting at pretty much the same thing I suggested in 1987. Further, I think I stumbled on its missing link.

Never mind shrinking the kids, will Geezers drink the kids? Come on! Like, I don’t mean with a straw or anything, at least not right away. I mean like, for some time now, I’ve feared that my Gray Goo Generation is cursed to absorb all the others.

Let me explain. As I sat woolgathering over an earlier draft of this retrospective, the gray goo phrase suddenly bobbed up like Queequeg’s coffin. And when I searched everyman’s unimpeachable source, I was gobsmacked. Wikipedia traces gray goo’s popularization to a (gasp!) 1987 Omni magazine article, which in turn credits nanotechnologist Erik Drexler, referencing his 1986 book Engines of Creation.

Gray goo is bad news—self-replicating nanobots that consume all matter, turning a whole planet into a uniformly self-referential pile beyond mitigation by Grecian Formula. Hey, do Boomers resemble that remark or what? Perhaps Blutarsky, I should not fault my fellow stardust, my golden-hair-surprised contemporaries, but rather, get back to my family garden and dig into my parents’ first born son.

I was different from them. Never once did my dad quiz me about Bob Dylan, the Incredible String Band, Lou Reed or Ry Cooder. Never once did my mom sit down with her cup of Red Rose tea and wanna talk Whole Earth Catalog or know what Wavy Gravy was really like. Wasn’t done. They so didn’t care. They so very special didn’t care. Didn’t know, didn’t care, with malice towards none I might add. Well, no malice from mom anyway. Back then it was still okay to ignore children who just made something out of Play-Doh and were convinced it was the cat’s ass. Somewhere, sometime later down the line, a manager, an editor, an art director, a gum-chewing Manpower clerk would look your kid in the eye and say, matter-of-factly, “That’s not the cat’s ass.”

Traditionally, that’s what Bring Downs were paid to deliver—you know, truth to somebody else’s kids. Parents, on the other hand, had J&B to drink. And thousands of hours of Gin rummy to play before they nodded off. Truth? Please. Wipe your nose and take a powder.

I’m sure both my parents came across splashy ads for Charles Reich’s best-selling soporific 1970 countercultural rumination The Greening of America in The New York Times Book Review. I think both occasionally flipped through that supplement, and I know Greening excerpts passed by my mom’s eyes in The New Yorker. Gimme a break, huh? They flipped through new Sears catalogs too. This was our living room with the plastic RCA color console TV, not the New School for Social Research.

But of course, I ploughed through Greening excerpts, just to sneer myself sick as a self-satisfied dog. Is that some kind of Gray Goo reading disorder? You know, searching out, gorging and purging a bunch of fawning nonsense about your generation. I swan, we Boomers lived for dopes that got us all wrong. All right, all right, I’ll be rigorous. I lived for that.

Have other generations found more satisfying pastimes? You tell me, all you protest kids. How would I know? I’m a prisoner of my paradigm. Sometimes I think this Boomer was born fallen, and while I can’t get up, I can and will keep tracking my generational gravity’s rainbow to the point of cryogenic suspended animation, until some unworthy but annoyed successor drives an oak stake through my heart’s dark self-awareness, my gray goo gelato, without end, Amen.

What surprises me, since my original comic strip, is how apparently unpredictive it was, modern spinal fluid studies notwithstanding. Fancy that! Where’s the backlash? You may well have inferred by this point that I have no kids of my own to hector about this foolishness.

Best I could do was interview my Millennial nephew ­­at dinner with his parents. For a sample of one, C. is pretty representative. Grad student living at home, math teacher in the making, GoPro kinda guy, heckuva skateboarder, pals with his parents and indulgent with his crazy uncle, a far better egg than I ever was at his age.

Does he resent Boomers co-opting everything? Slang. Tattoos. Playlists. All that silly stuff. More importantly, does he think we drink spinal fluid? He laughed about that. He liked the blueberry margarita thing. He bought the general idea as a joke based on a nano-nugget of truth, but… Nah. Then I got that look. I like my nephew a lot. I didn’t press my luck.

All right, maybe the Social Security lifeboat needs to be sunk another 20,000 leagues under the sea. Maybe, Millennials will stage a Rapture-like mass abandonment of everything rock and roll band. Like, just "Walk Away Renee" from all those amps, keyboards, guitars, drums, effects pedals, funny clothes and haircuts and faces when they play high on the neck and stuff.

During everyday out and about, some young people actually hold the door open for me, but given the right social upheaval, I’m convinced that could change. Will those cheery door persons be at my bedside, ready to smother me with my pillow? A little time, that’s all I ask. You know, until I can upload my essence to Pinterest.