A Dip at the Community Pool 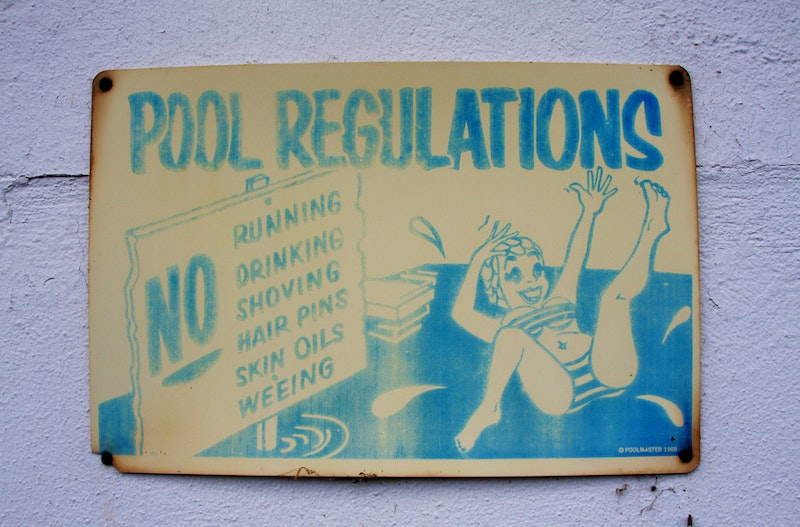 None of the three lifeguards on duty noticed the daredevil a few feet from the lip of the deep end—red trunks, goggles on head, glint in his eye—who performed a back flip to show off for friends, his feet thudding quietly on the slick concrete on the concrete. Given that the community pool was a mob scene, who could blame them? Tykes and pre-teens climbed up into and descended down waterslides emptying into a kiddie pool, drifted in and out of games of Marco Polo, or flirted with one another while Nirvana’s “Smells Like Teen Spirit” and a medley of 1980s hit singles blared through the PA system. Discovering an empty bench for my shoes, towel, and shirt seemed like a small miracle.

The daily rate for this pool is tiered by age, and when the frazzled girl working the desk asked how old I was, I broke character to make a joke: “Oh, I’m 55.” The frightening thing was, she believed me; I could’ve scored a senior citizen’s discount. The cash register was locked or something, so I was promised that someone would ferry the change to me once they got it open. Which meant five uncomfortable minutes reclining on a bench in a pool area where I was among the 10 percent of the population older than 25; as a father, I’m painfully aware how that looks. One curse of excessive self-awareness is that you tend to view yourself through the eyes of strangers in the worst possible light. I tried to tune out the din of exclamations and recriminations, to disappear.

Refreshingly cold in proportion to the climate, the water bore the bleached stench of exertion endemic to a pool that’s been full of children for eight hours already. Under the surface it was possible to forget that but before too long I was gasping for air, clinging to the rim. The pool website indicated that this was “lane swim hour”; a fallacy, but it didn’t much matter because I lacked the basic vigor to swim continuously for more than a few minutes. Meanwhile, all around, children thrashed and laughed and pulled ridiculous poses while propelling themselves from diving boards as parents glared at a distance.

Everything about the milieu—bustling, soaked, chaotic—felt alien to the point of nausea. On occasion I’m able to convince myself that on some level I’m still young, that the energy and spirit of youth still burn inside. This, like my return to Washington College a few weeks back, was a reminder that it doesn’t really. Could I have gotten some enjoyment out of this experience with my son present? Possibly, though he’s like me in a lot of ways: disdainful of histrionics, crowds, stimuli, and often unable to live in any given moment as it’s happening.