Are There No Workhouses?

A tour through former jobs and offices long since demolished and replaced. 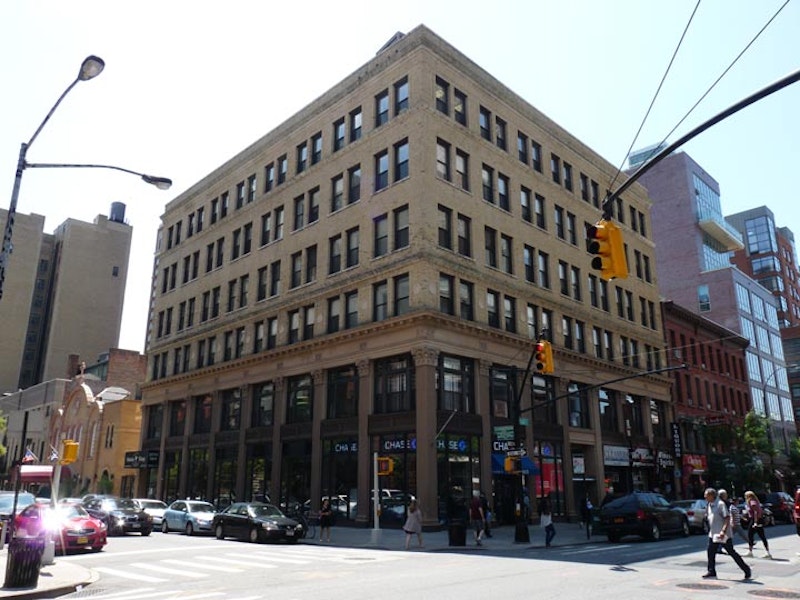 In mid-2021 I find myself working at home writing press releases announcing people who’ve purchased a place in the Marquis Who’s Who book. It’s piecework: the more entries I write, the more I make. Currently, I confine myself to 18 per week, as it’s tedious, consulting information taken over the phone by Marquis employees that appears on their writers’ database (called Livetest) and researching online; LinkedIn is an occasional help, though relatively few people really describe their various jobs in detail there.

I’ve freelanced for nine years, since early 2012. Most of my career has consisted of working with print: editing, writing, proofreading, and mechanicals and layout. After nearly 40 years in the business, and 22 writing and researching my website Forgotten New York (which will likely continue until death or incapacitation) as an inveterate nostalgist, I decided to look back and see where I’ve been. Space limitations prevent me from listing everything (just as ageism on the part of HR departments prevents me from listing everywhere I’ve been on my resume).

The first paying job I had was in a passport photo studio on the ground floor of Brooklyn’s Chanin Building, seen above, at Court and Schermerhorn Sts., not to be confused with the much larger, 56-story skyscraper on Lexington Ave. near Grand Central Terminal. I did simple tasks here, such as developing photos in a darkroom and sweeping floors. The money, as with my next job, went toward helping with college tuition and lunch. The studio occupied the space where the nails joint on the corner is now.

The row of buildings across Court St. were completely razed in the 1990s to make way for an ugly entertainment complex including a movie theater and a Barnes & Noble bookstore, so the view I had exiting and entering is completely different from what it was in 1978. 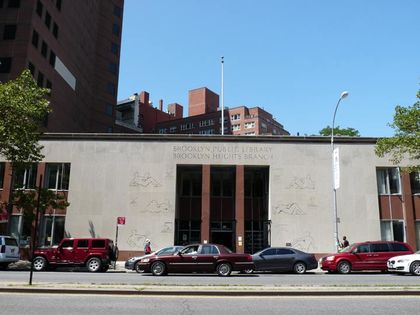 According to the NY Public Library website, the Brooklyn Business Library “has a reference collection of more than 100,000 volumes, a circulating collection of 30,000 books, internet access, electronic resources, 800 magazines and newspapers, and real estate data. The Business Library provides industry and demographic data, investment information, business directories and free electronic resources available remotely with library card, as well as access to the internet computers. It also houses the Small Business Information Center, which includes sample business plans, books on starting and advancing a business, and free counseling with SCORE, the Service Corps of Retired Executives.”

My tasks here consisted of shelving books and magazines, labeling with magic marker on book spines, and filing microfiche (books and magazine content was stored in reduced size on flat sheets of glassine that was accessed through a magnifying viewer). Our schedules were posted weekly and I had various hours depending on my classes at St. Francis College. I could work a few hours early in the morning and then return for an evening shift, sometimes the same day.

While working at BBL, one of their reference volumes was a battered four-volume 1929 desk atlas of Brooklyn by Belcher-Hyde. Even after I left BBL, I’d sometimes come in and ask to see it. My collector friend Brian Merlis had a more pristine copy, but I was happy to see it online a few years ago at Historic Map Works.

This building no longer exists, razed a few years ago for a skyscraper residential building. The Brooklyn Business Library relocated into the main library at Brooklyn’s Grand Army Plaza, at the northern reaches of Prospect Park. 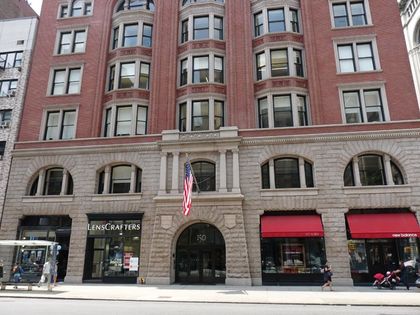 I didn’t realize it at the time, since the ground floor had been corrupted and “modernized” while I was working there, but 150 5th Ave. at W. 20th St. is perhaps the most architecturally arresting building where I’ve worked. The Romanesque Revival masterpiece was designed by architect Edward H. Kendall and constructed from 1888-1890 for the Methodist Book Concern and Missionary Society. At the time, this stretch of 5th Ave. was filled with religious publishing companies, and it would continue to harbor publishing for over a century.

The Methodist Book Concern turned out religious tomes and periodicals such as The Christian Advocate and Sunday School Journal. After a few decades, the MBC moved to Nashville in 1939, but maintained a retail office at 150 5th until 1962. The three top floors were added in 1909, providing medieval-style battlements and the trigram MBC. The building later was home to a laundry workers’ union health center and Ideax, a camera manufacturer. The original ground floor designs was replaced with a boxier look by the time I arrived in early 1981 at a surviving printing firm, Lexigraphics. Thankfully, a 2001 reconstruction restored them.

I remember little of Lexigraphics, except that the work was mostly textbooks. We read from proofs on shiny paper or on Diablo-style holed paper. Irv Roberts, the owner, was a kindly sort and one day, during a heat wave, he showed up with a chocolate ice cream bar for everyone. It was a fairly small office. Roberts passed away just this year at 91. 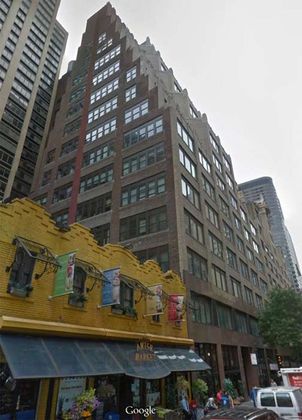 I had had a love of type before working at Photo-Lettering, at 216 E. 45th St., but working at the city’s #1 type shop and primary source for advertising type took things to another level. Just about all my time at the institution, founded in 1936 by Harold Horman and Ed Rondthaler, was spent overnights.

I had a blast working at what was one of the world capitals of type—thousands of fonts were on sale and some of the giants in the business such as the late Ed Benguiat worked there. PL’s clients were the top ad firms of its day such as J. Walter Thompson, Ogilvy and Mather, Doyle Dane Bernbach. Type for ads was prepared overnights so it could be delivered to the ad companies early the following day.

Photo-Lettering also gave rise to the Electrographic Corporation and the greatest printing trade magazine, U&lc, a must for type buffs. I still have Photo-Lettering sample books, as well as Ed Rondthaler’s bio, Life With Letters. Well after retirement, Ed found a new career as a TV pitchman, appearing in commercials for Pearle eye care, among others.

Setting type now consists of pressing a few buttons, but back then, crews of servicepeople “specked” type by measuring the space where the ad copy would appear, and then using gauges to estimate the point size and leading of the type to be set to fill it. At that point the specked copy was sent to the typographers, who set the type on computer terminals that employed lengthy sets of code to specify size, leading (the space between lines of type), italics, etc. The practice was similar to html code today, though much different coding was used.

After seven years, I left to join a small typesetting shop on W. 29th; I just wanted daytime hours. I found myself back at 216 E. 45th for a few weeks in the spring of 2018, looking over extremely boring fine print for a financial publisher… all night from midnight to eight a.m. 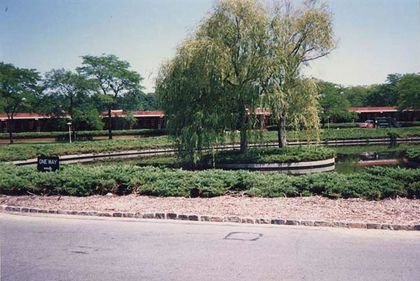 The most suburban setting in which I’ve worked was at Publishers Clearing House in Port Washington, the direct mail magazine subscription and cheap products distributor, which runs the Prize Patrol sweepstakes. The company occupied the only ranch-style building I’ve ever seen that contained offices. It was built on a sand pit in 1967, so couldn’t be built with more than one story.

I arrived in 1992 by waking up on the subway one Sunday and, finding a Newsday on the bench beside me, opened it to the classifieds and dialed the number PCH placed in an ad for proofreaders. A few weeks later, I was hired. This was probably my most rewarding work experience, since I was permitted to work in a number of departments. When the studio heard I had studied QuarkXPress, Photoshop and Illustrator, I was recruited; and after writing several pieces for the company newsletter I was then asked to move over to copywriting. I was laid off in 1999 when much of the workforce was laid off so PCH could settle various lawsuits.

In early-2006 I was rehired as a proofreader, but things had rigidified somewhat at PCH and I wasn’t allowed to shift between departments as before. My first stint, however, was a lot of fun, as well as the suburban setting. PCH relocated to Jericho, several miles to the southeast, in 2017. 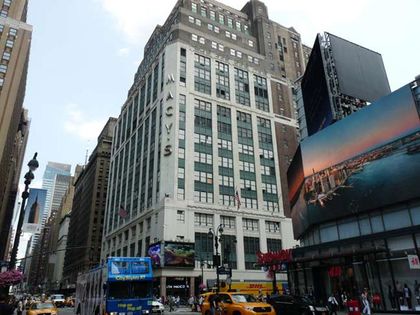 Macy’s was founded as a dry goods store in 1858 on 6th Ave. and W. 14th St. by Rowland Hussey Macy, a former whaler from Nantucket, MA. He had run several smaller stores in Haverhill, MA before moving to NYC. His tattoo acquired while at sea, a red five-pointed star, became Macy’s symbol. There are still several red stars visible in the concrete ornamentation of a building on W. 13th St., the back end of the original store. Macy died in 1877. After 40 years on W. 18th in the Ladies’ Mile district, Macy’s moved uptown to a new building in Herald Square in 1902.

Macy’s expanded and purchased all the property in the block surrounded by 6th and 7th Aves. and W. 34th and 35th Sts., and eventually built new ells and extensions to the original store except for two small plots at Broadway and W. 34th and 7th and E. 35th. The store leased property on the small corner building on Broadway and has erected a series of giant billboards in the spot.

Macy’s eventually occupied a total of 2.2 million square feet at Herald Square and for many years was billed as “The World’s Biggest Store.” It was dethroned in that department by the South Korean chain Shinsegae, which opened a 3.16 million sq. ft. store in Busan in 2009.

The office where I worked, officially part of Macy’s Advertex division, was on the 17th floor and several of the offices opened up onto a ledge that overlooked 7th Ave. Naturally, I got out there on a number of occasions and took photos of the view, sticking the camera over the edge. On 9/11 I watched scrambling fighter jets from the ledge.

Macy’s was the first job I found through social media. At lunchtime I’d wander around the neighborhood or take the subway up or downtown. I was using a film camera then and got everything developed in a small shop on 7th Ave. After a “departmental organization” in late-2004 my goose was again cooked. 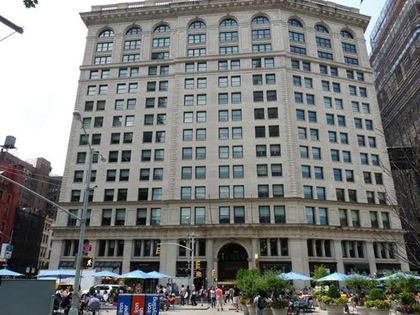 I don’t own any jewelry, but I worked several months as a freelance proofreader/copy editor (and making several brilliant saves) at Tiffany & Co., the world’s biggest jeweler, working on their website which is published in several different languages, all of which, it seems, have different ways of punctuation and different copyright marks, etc. which I was brought in to check, as well as their customer emails, which also differ by country.

Tiffany’s flagship store is uptown on 5th Ave. and 57th St., but their main offices relocated in 2011 to 200 5th Ave., originally the Fifth Avenue Building when built in 1912 (its original clock still stands). The building, formerly the International Toy Center, had been home to offices in that industry; it’s now occupied by Tiffany and the Grey Group (formerly Grey Advertising). Eataly, the famed aggregation of Italian restaurants, occupies the ground floor along with an ever-shifting array of retail establishments.