The elevated used to be king in Manhattan. 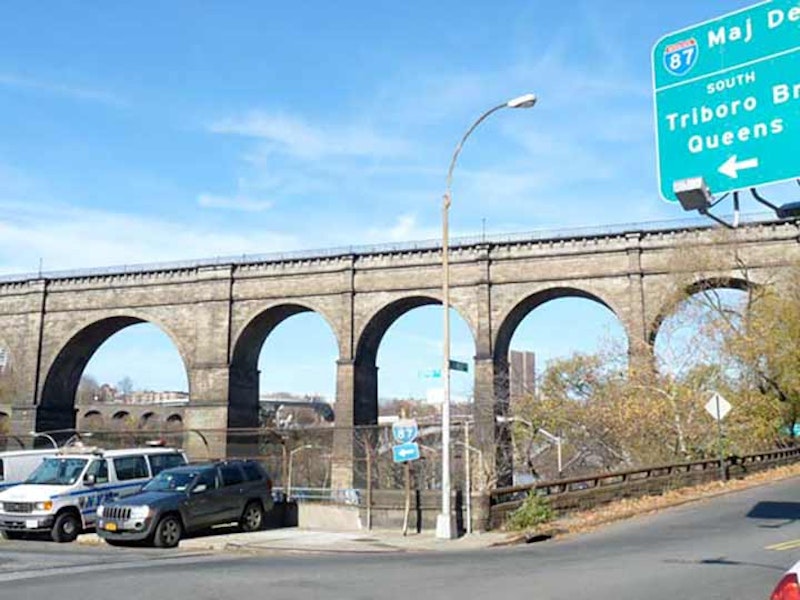 Some of New York City’s hilliest terrain can be found clustered along the Harlem River in the western Bronx. Streets curve sinuously up the cliffs, while others become steps; one of the most spectacular step streets in the city, at Jerome Ave. and W. 165th St., zigs and zags in three different directions to reach the cliff’s apex. The region was owned and farmed by the Morris family during the colonial era; the Morrises raised prize cattle on their estate here in the 18th century.

High Bridge, which connects High Bridge Park near W. 174th St., Manhattan, and W. 170th St. in the Bronx, is the oldest remaining bridge connecting two boroughs. When it was built between 1837 and 1848 by architect John Jervis it connected two separate towns, since that area of the mainland wouldn’t become a part of New York County until 1874 (and the Bronx would not become a separate county until 1914). It was the third bridge to cross the Harlem River: the original Kings Bridge spanning the river was built by the British in 1693 and the original Macombs Dam appeared in 1814; the present Macombs Dam Bridge, the third on the site, was built in 1895.

High Bridge was built as a conduit to bring the City water from the upstate Croton Aqueduct. Originally, High Bridge featured massive stone arches for its entire length. The arches survive on the Bronx side, but the steel span was constructed in the 1920s to allow navigation on the Harlem River. Water was carried in two 33”-diameter pipes, later replaced by a more massive 90” pipe.

High Bridge has had a walkway since its beginning, although it never had roads for auto or horse traffic. Edgar Allan Poe, a Bronx resident toward the end of his life, enjoyed frequenting the bridge. The walkway features attractive cast-iron hand railings and interlocked red brick paving stones, along with views of High Bridge’s neighboring spans across the Harlem, the Alexander Hamilton and Washington Bridges. It was rehabilitated and reopened in 2015, some 55 years after closing because of vandalism. 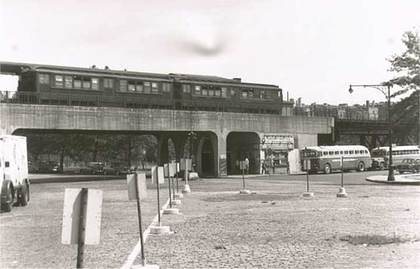 The elevated used to be king in Manhattan. The sun never saw lengthy stretches of Pearl St., the Bowery, Greenwich St., W. Broadway, Columbus Ave., 1st Ave., 2nd Ave., and 6th, 8th and 9th Aves., since they were hidden beneath elevated lines. In addition cross streets like 23rd, 34th, 53rd, and 110th also were under els for short stretches.

The oldest elevated line was known as the Ninth Avenue El, which began in 1867 and survived, in part, until 1958. While all trace of the Second, Third and Sixth Avenue Els have pretty much been eradicated since, except for the Third, which met its Manhattan demise in 1955 and was slaughtered on 3rd Ave. in the Bronx in 1973, most of the other els were torn down fairly early in the century. A short stretch of the Ninth, between 155th St. in Harlem and the IRT elevated over River Ave. in the Bronx, was allowed to remain as a shuttle until 1958 because of its convenience for baseball fans en route to the old Polo Grounds at 8th Ave. and 155th St. But that, too, ended when the Giants left for San Francisco.

What's interesting about the old Ninth Avenue el was that for about a four-block stretch in the High Bridge section of the Bronx, the elevated traveled through a tunnel, making it a de facto subway, although it wasn't a part of subway network. Engineers faced a prickly problem when extending the Ninth Avenue El into the Bronx in the 1910s. There’s a steep ridge in High Bridge abutting the Harlem River, with streets climbing the hilly terrain. Rather than make the elevated trains climb and descend a steep hill, the builders simply tunneled under the ridge, creating a subway for elevated trains for a few blocks. After crossing the Harlem River on a trestle, the el trains stopped at the open-air Sedgwick Ave. station, then entered the tunnel and emerged at the elevated Jerome Avenue-Anderson Ave. station north of W. 162nd St. The el trains then traveled along an elevated trestle as far as the junction with the IRT Woodlawn elevated above River Ave.

This section was maintained as a spur from the IND 8th Ave. station at 155th St. to the Woodlawn line until 1958. Most of the concrete and iron trestles remained in place well into the 1960s, and even today, the bare platforms for Sedgwick Ave. and Jerome/Anderson are still there. The tunnel remained open and available for urban explorers until 2000, when it was finally sealed; it had become a depository for wrecked cars: no roads except Sedgwick Ave. approach the tunnel, which is on a steep angle downward from the street. 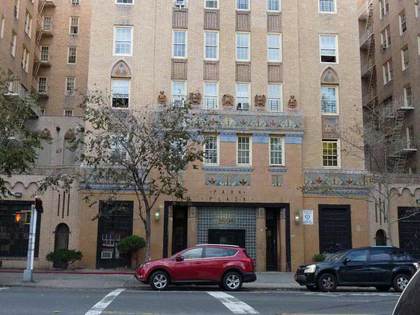 Park Plaza, 1005 Jerome Ave. opposite John Mullaly Park, may be the Bronx’s most famed apartment complex not located on the Grand Concourse. The massive Art Deco building was designed by architects Horace “Harry” Ginsbern (interiors) and Marvin Fine (exteriors) and constructed between 1929-1931, at about the apotheosis of Deco-ism, at least in the States. In the early-1930s, polychrome terra cotta was in vogue, and Park Plaza does it better than most. Ginsbern was known as “the genius of the Bronx” as he designed 137 apartment buildings in the borough. Fine’s taste in gargoyles was eclectic—besides the standard-issue pondering long-eared beast, of the type seen on Notre Dame in Paris, there are also frogs and squirrels. Other terra cotta elements depict an architect presenting a model of his new building to the Parthenon for approval. 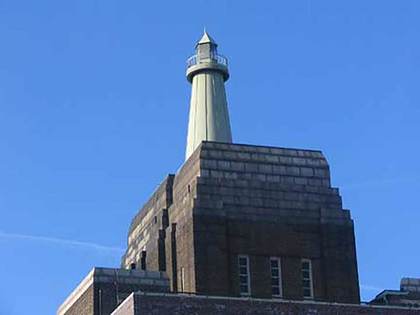 A look skyward at a building at Sedgwick Ave. and University Ave. (Martin Luther King Blvd.) reveals a 30-foot tall lighthouse cast in bronze. It was the home office of the H.W. Wilson Company, a bibliography and periodical index publisher; among their titles were the Readers Guide to Periodical Literature and Current Biography. The company also maintains a voluminous online reference database.

Halsey William Wilson began the indexing publisher with partner Henry Morris in Minneapolis, Minnesota in 1889 as a bookseller. Wilson tired of searching though publishers’ catalogs, and hit on an idea to publish his own catalog of new books that would be constantly updated. Wilson’s first Cumulative Book Index appeared in 1898, and by 1901 had expanded to include magazine articles. In 1911 the company moved to White Plains, NY and again in 1917 to the present location near the Harlem River. In 1929, the eight-story building with the lighthouse was built. The lighthouse, resting on an open book, is meant to “give guidance to those seeking their way through the maze of books and periodicals, without which they would be lost." At night, the entire structure is lit: in 1998, the company’s centennial, the lighthouse was re-lit after being out of commission for several years. The publisher is now located in Hackensack, but its Bronx lighthouse remains. 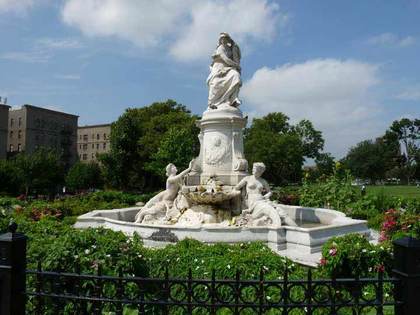 Dusseldorf’s loss was the Bronx’s gain, as Ernst Herter’s 1893 fountain statue in honor of Heinrich Heine, author of Die Lorelei, was rejected by the German city of Heine’s birth. A coterie of affluent German-Americans purchased the work and offered to place it in Grand Army Plaza. That site, too, was rejected, and the fountain was ultimately placed in Joyce Kilmer Park at the Grand Concourse near E. 164th St. around the turn of the 20th century. Bronxites, too, have rejected it in their own way: no other public work had been more heavily graffiti’ed and vandalized over the past few decades. Happily, the fountain was fully restored to a brilliant white and given a new iron railing and moved to E. 161st St. across from the Bronx County (Mario Merola) Courthouse. 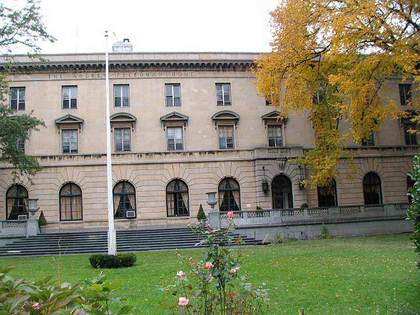 Though the Grand Concourse is filled with Art Deco and Moderne masterpieces, one of its most intriguing buildings is set back from the street and hidden in summer by thick foliage. The Andrew Freedman Home for Older Adults, at E. 166th St., was built in 1924 with an endowment in the will of Freedman (1860-1915), an early owner of the New York Giants baseball team. But Freedman’s stipulations were specific: it wasn’t to be a usual old-age home, but one for indigent adults who’d previously been rich and lost their fortunes. Freedman had nearly lost his own fortune in a 1907 stock market panic and a fear of destitution apparently haunted him.

Residents lived in the accustomed luxury that their reversals of fortune had denied them: a kitchen with a restaurant-quality menu, spacious quarters, club rooms, and a 59-member staff. By the 1970s, there were few former millionaires left in the Bronx, the home changed its policy, and by the early-1990s it became a regular old folks’ home and took applications by anyone over 55. Its gardens, terraces and arched balconies speak of a time when you were better having had money and lost, than never to have had it at all. 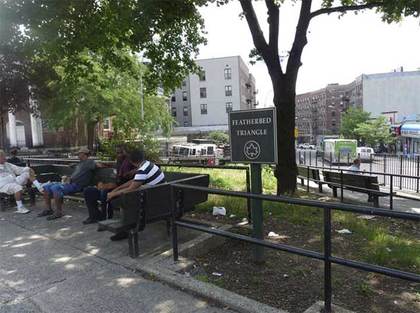 New York City has systematically eliminated its more colorful street names over the decades, whether by numbering them or by giving them rather more prosaic, less colorful names. In the Bronx, Bear Swamp Rd. in Morris Park became Bronxdale Ave.; Fisher’s Landing Rd. in Eastchester became E. 233rd St.; and Stinardtown became a part of the neighborhood of Pelham Bay. A couple of the old names have defied modernization. Hilly Featherbed La. runs in two sections: from Jerome Ave. west to Macomb’s Rd., and a little further north, from Macomb’s Rd. west to University Ave. Surprisingly, Featherbed La. wasn’t officially named until after 1890, when it began appearing on maps.