Andy Warhol’s Hanging on the Wall

Warhol was obsessed with fame and fortune in all its inglorious trappings. 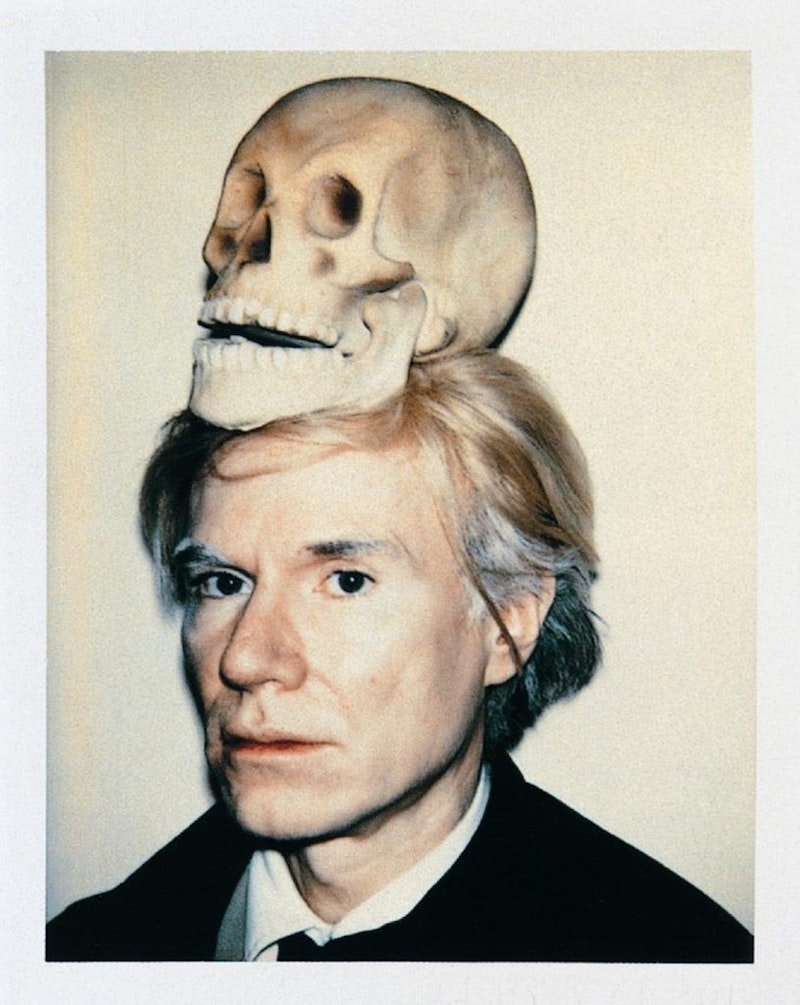 There’s an old joke among poets during the performance art days about duct taping someone to a wall and they'd just hang there in a silver cocoon spouting poetry like a piece of living sculpture art. There was an artist who did go around duct taping herself naked to gallery walls and slowly ripped out of her sticky bondage. She emerged to the accompaniment of some background instrumental music like a human butterfly. I can’t recall her name but it was the late-1970s on the third floor of our Eutaw St. studio loft that doubled as an apartment, art gallery and Da Moronics’ band rehearsal space. It occurred during Baltimore’s heyday of punk/performance anything goes creative era.

Reminiscent of last year's debut of a lone ripe banana duct taped to a gallery wall as part of an exhibition by an Italian artist whose name's forgotten now. The "work" fetched $120,000 at auction. After the opening another artist plucked the banana from the wall, promptly peeled and ate it to the astonishment of slack jawed onlookers. Andy Warhol once quipped, "Art is what you can get away with." Like committing some unspeakable crime perpetrating fraud on an unsuspecting crowd. The act of misdirection to the point of distraction is an art too.

There's an Iggy Pop song on the Brick by Brick album with the lyric, "Somebody farts, that's the nature of art." It's no wonder why all these artists and musicians like Bowie, Iggy and Lou Reed are all connected to Warhol. Somehow it's a natural rock ‘n’ roll process. The act of chameleon like expression in its simplicity of what art is or isn't while always changing and staying exactly the same. Modern, abstract or Pop. It was the fastest growing game in town. The biggest scandal or perhaps the greatest con job of all time.

Through Warhol's cookie cutter, rubber stamp eyes, the vision of art as commodity produced in a factory was genius, also the biggest swindle in art history. The entire gambit of art history could be summed up in a few gestures from Warhol like, "Gosh, gee, golly, I don't know... I guess people like it."

Warhol was obsessed with fame and fortune in all its inglorious trappings. From the glitzy glamour of NYC's Studio 54 to the gritty reality of the naked city that Warhol loved to exploit. The celebrity portraits were mass produced like the products they emulate along with the Campbell soup cans, Coca-Cola bottles and Brillo boxes. Celebrity is a commodity too. Dime a dozen consumers eat it up. Pay big bucks for a piece of the glittering pie. From A List superstars to hangers-on getting bumped and wannabes who never make any VIP guest list.

Warhol was a shutterbug who photographed the rich and famous. He palled around with Jackie O, Bianca Jagger, Liza Minnelli, Liz Taylor and Betty Ford, whose famous rehab clinic saw the likes of them all on a regular rotation. They confided their dark secrets to Andy who wrote it all down or published them in his Interview magazine. Warhol’s drug of choice was amphetamines, which allowed him to stay awake for endless evenings night clubbing and long days watching the elite meet and greet at exclusive parties and major art receptions. Warhol was addicted to fame and all its pitfalls. He loved to gossip like an old biddy, dishing the dirt on big movie stars and artsy types alike. No one was immune to his wagging tongued hearsay. I read The Warhol Diaries long ago and all I remember was the tattle tales and scathing putdowns about the famous people he met. The highs and lows of being in the public eye or his camera lens. No one was immune to his jaundiced judgment.

In the 1950s, Warhol was a successful commercial artist drawing ads for clothes, shoes and the like for top magazines. He had a fashion sense that bled into the 1960s mod/pop/happening scene of beatniks that devolved into hippies. The art world was exploding with futuristic hip designs and trippy graphics. Things were turning modern faster than you could put a man on the moon.

Warhol changed the art world putting a price tag on repetition and signing his autograph on everything. He made the underground above board through his films and promoting the Velvet Underground. It was all art to him: good, bad or indifferent was of little consequence. He turned it upside down and sideways. From his humble beginnings in Pittsburgh, where his museum resides today, to his ultimate glory among the art cultures immortals. His insecurities only made him a more famous super star-human. The incessant hoarding of trinkets and toys. The silver wigs he donned askew. The corset he wore to hold in his guts after getting shot by Valerie Solanas because he rejected her film script. The dark shades that hid his eyes from prying fans and heavy makeup he wore to cover up his facial off color skin pigmentation. His died after a botched routine gall bladder surgery at the age of 58. His work lives on around the world as he achieved what he most desired. He creates something from nothing repeatedly and got paid for the pleasure of making everything art.