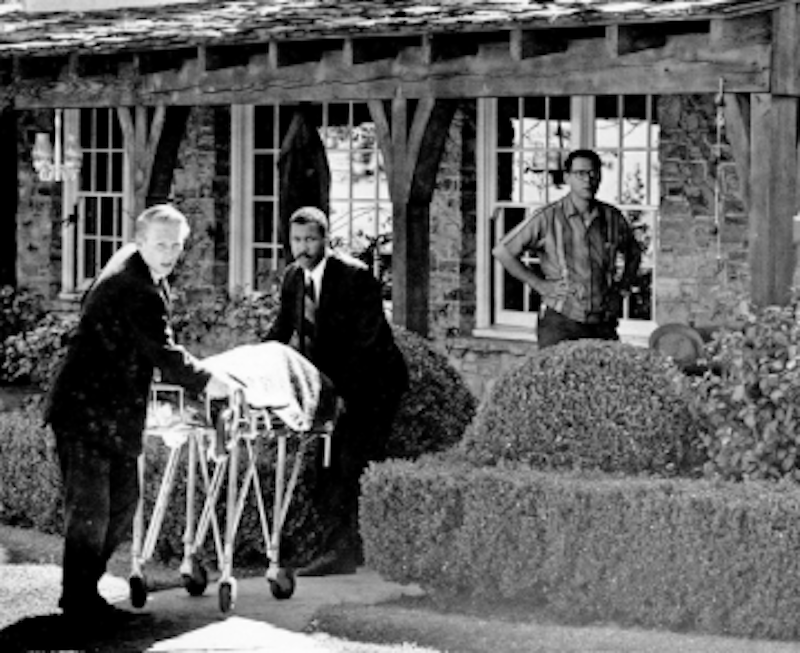 Saturday August 9, 1969 was a beautiful balmy day in Los Angeles. The temperature hovered around 78 degrees. The Dodgers played the Chicago Cubs at Dodger Stadium. Disneyland debuted a new attraction called The Haunted Mansion. Elsewhere in the country, the Apollo 11 astronauts had just returned from the moon and Woodstock was six days away.

Sharon Tate was 8 ½ months pregnant. She’d given up wine and weed and taken to drinking milk. A few months earlier her friend Julie Payne, girlfriend of screenwriter Robert Towne, told Tate about a rental property in Benedict Canyon. Tate checked it out but it wasn’t quite right.

She found another place nearby on 10050 Cielo Drive. This house was perfect. It had a garden, a pool and majestic city views. The home’s owner was Rudolph Altobelli, a Hollywood agent who represented Katharine Hepburn and Henry Fonda. Altobelli loved renting to celebrities. Previous tenants included Cary Grant and girlfriend Dyan Cannon and most recently music producer Terry Melcher (son of Doris Day) and girlfriend Candice Bergen. Tate called her husband Roman Polanski to tell him she was taking the place.

Polanski was in London preparing his next movie Day of the Dolphin (ultimately directed by Mike Nichols). He was having script problems and told Tate he’d be home soon. When Tate last saw him, he seemed distant. He refused to be intimate and the two fought. Polanski later said when they parted he felt for some unexplainable reason he’d never see her again.

In early August, Wojciech Frykowski and his girlfriend, coffee heiress Abigail Folger, came to stay with Tate. She wanted to ask them to leave but they were Polanski’s friends. Jay Sebring was staying at the house as well. He was Hollywood’s best-known hairstylist and an old boyfriend of Tate’s.

Los Angeles was like that in those days. Few people locked their doors, especially in the hills. If you needed sugar or milk you simply entered a neighbor’s kitchen and helped yourself. Guests stopped by unannounced and stayed a few days or longer. It wasn’t unusual to wake in the morning and find a friend on your couch or a stranger on a backyard chaise lounge. Drugs flowed.

Polanski called Tate on Saturday and told her he’d leave London on Monday “whether I’m through with the script or not.” Tate told him about a stray kitten Frykowski and Folger found and were feeding in the bathtub. That night, Polanski worked on the script. The phone rang. It was Bill Tennant, Polanski’s agent calling from Los Angeles.

“What is it?” Polanski asked. “There was a disaster in your house,” Tennant said. Polanski assumed there had been an earthquake and the house crumbled. Or maybe the hill collapsed.

“Sharon is dead,” Tennant said. “And Woj and Jay and Abigail.”

“Roman, they were murdered.”

Polanski dropped the phone. He banged his head against the wall, crying. This made no sense. He’d just spoken to Tate a few hours earlier. Word spread through Los Angeles. Details were meager. People called each other, digging for information. Facts slowly emerged. The victims were stabbed to death. Tate’s body was found in the living room, a rope around her neck. The other end of the rope was tied around Sebring’s neck. A young man was shot to death in a car outside the home. No suspects. No motive.

The city fell into a state of panic. Everyone locked their doors. A Beverly Hills gun store sold 200 guns in two days. The cost of guard dogs increased from $500 to $1500. People moved out of their homes in the hills and into hotels. Beverly Hills Hotel filled to capacity.

Rumors spread. It had to be an inside job. Someone who was angry with Tate or Polanski. Julian Wasser, a Life photographer who documented the murder scene, said, “Hollywood was afraid because they didn’t know what was going on. They thought it was a strange cult that was going to kill everybody. It led to security mania, everyone putting in alarm systems.”

Frank Sinatra went into hiding. Mia Farrow, who’d starred in Polanski’s film Rosemary’s Baby, thought she was “next.” Michelle Phillips of the Mamas and the Papassaid, “We all suspected each other.” Joan Didion kept track of car license plates outside her home. She wrote, “I remember all of the day’s misinformation very clearly. I also remember that no one was that surprised.”

Novelist Jill Robinson said, “The murders seemed the consequence of everything all of us had done. We had gone too far, done all the things our parents warned against—and more.” Debra Ann Tate, Sharon’s sister, said, “Everybody was off frantically trying to make some kind of sense of this horrific tale that was forced upon us. But there was no sense to be found.”

The police suspected a drug deal gone wrong, possibly involving Frykowski. They missed important clues. A news team discovered the discarded clothes of the killers outside the house. A 10-year old boy named Steve Weiss found a gun in his backyard.

The next evening, Sunday, August 10, Leno and Rosemary LaBianca were killed in their Los Feliz home. He owned a small grocery chain and she ran a clothing shop. The word “War” was carved into Leno’s abdomen. Rosemary was gagged with a lamp cord and stabbed 41 times. “Death to Pigs” and “Rise” were written in blood on the walls. “Helter Skelter” was written on the refrigerator.

The press spread innuendo and falsehoods. They speculated on sex crimes, witchcraft and satanic sacrifices. Time Magazine wrote the murders were “as grisly as anything depicted in Polanski’s films.” Since Rosemary’s Baby involved demonic sacrifice, people wondered if Polanski was involved. Was life imitating art?

When Polanski returned to Los Angeles, hotels refused to take him. Robert Evans, the head of Paramount Pictures, let him stay in a studio dressing room. Doctors sedated him and a guard kept watch outside. His friends Warren Beatty and production designer Richard Sylbert urged him to continue working on his movie. Stanley Kubrick told him, “I’m sure everyone’s telling you to work. I know you can’t work.”

Polanski consulted a psychiatrist who said it’d take at least four years to recover. Polanski attended Tate’s funeral in a daze. He didn’t know where he was or what to do. He decided to stay in Los Angeles and search for the murderer himself. He offered a $20,000 reward for information leading to the arrest of the killers.

The police interrogated him. He was barely cogent. He told them, “The whole crime seems so illogical to me. I’m looking for something that doesn’t fit your standard… I would look for something more far out…. Maybe it was somebody who hated me.  It’s difficult to imagine somebody hated me to this point.”

Polanski visited the Cielo Drive house. He saw the word “PIG” on the front door written in Tate’s blood. He saw bloodstains on the living room floor next to a book on natural childbirth. Outside the house he found a broken lantern. He held a press conference at the Beverly Hills Hotel. He cried as he spoke. “This is difficult for me. The last two months of my life were the happiest. I turned thirty-six yesterday and my birthday present was this treatment by the press. It isn’t true, these things they say. These were selfish newsmen who said horrible things about my wife. You all know she was one of the most beautiful women in the world, but what few of you don’t know is how good she was. She couldn’t refuse any friendship.”

Polanski moved into Richard Sylbert’s beach house. He put on a brave face, hosting dinners, cracking jokes, reciting dramatic soliloquies. Novelist Susanna Moore, who was Warren Beatty’s assistant at the time, said, “Roman was so needy and so restless. He was manic, jumpy, talkative, dominating. He needed to be the center of attention. His clowning was a sign of insecurity and vulnerability. He was devastated by Sharon’s murder.”

Because he seemed to be having fun, the public turned on him. People said he wasn’t grieving properly. The police told him the murders might be vengeance killings committed by someone in his personal orbit. They advised him to consider his friends as suspects. Polanski became an amateur detective. He suspected John Phillips (of the Mama and the Papas). He wrote in his journal that Phillips’ “outward calm concealed a capacity for deep, burning anger.” Polanski purchased a testing kit allowing him to detect minuscule amounts of blood. He snuck into Phillips’ garage and swabbed the musician’s Jaguar. There was no blood but he found Phillips’ diary. The handwriting resembled the lettering of “PIG” on the front door. Polanski photocopied the page and sent it to a handwriting expert. The results were negative.

Polanski obsessed on a pair of horn-rimmed eyeglasses found at the murder scene. He purchased a small Vigor Lens Gauge. This allowed him to measure his friends’ eyeglasses and compare them to the glasses in evidence. When Bruce Lee, a friend of Polanski’s, mentioned he’d lost his glasses, he became a prime suspect. Polanski accompanied Lee to the opticians for a replacement pair. Lee’s prescription wasn’t a match.

Polanski hid microphones and bugs in the homes of his friends. He bought a transmitter and recorded conversations on a tape machine. He realized he’d be a suspect until the murderers were caught. He was slowly losing his mind.

Los Angeles was in shock. Before the murders, flower power permeated the city. Now strangers and hitchhikers seemed dangerous and threatening. Many hill denizens had encountered Manson at parties. Actor Al Lewis, who played Grandpa on The Munsters, let Manson babysit his kids. “I thought he was a nice guy,” he said. Neil Young met Manson through Dennis Wilson of the Beach Boys.

After Manson was convicted on seven counts of first-degree murder, Los Angeles changed. Gated communities arose. Neighborhoods hired private security patrols. Areas like Bel-Air and Brentwood installed armed guard gates. The homes of privileged were now off limits to strangers. You either lived in the hills or on the flatlands. You didn’t mingle. As Joan Didion wrote in her book The White Album, “The 60s ended abruptly on August 9, 1969.”