A Bridge in the Back Yard

I had toys as a kid, but I didn't need them: the architecture of New York City was enough for my imagination. 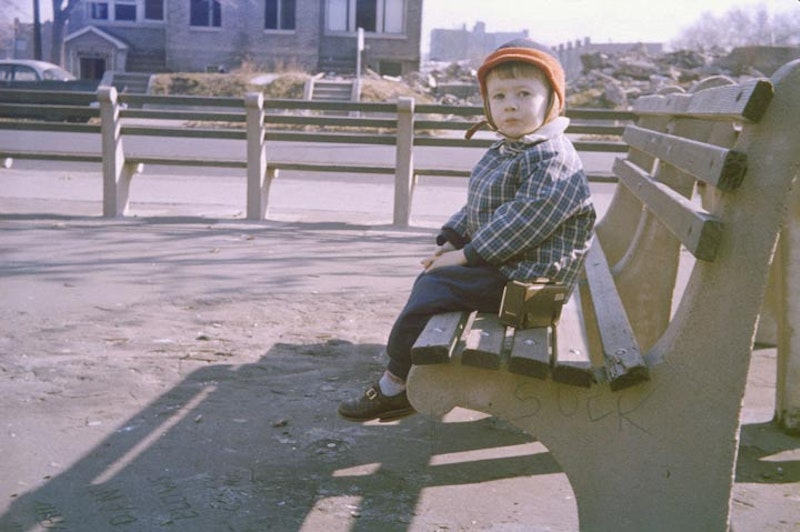 When I was a kid, I never had dreams. If you believe the movies, TV shows and commercials, children are always pretending to be pirates, cops, robbers, sports stars, and are busy with fantasies about lives completely different from their own—mundane or not, well-off, middle class, or poor. I was cynical from the beginning. I never thought Santa Claus somehow got into my apartment house; there was no chimney for him to shinny down. What, the milkman let him in? I figured my parents had something to do with the gifts. After all, the tags had their names on them. I was in Catholic schools for 16 years, through grade school, high school, college. Know what? I never bought in. I’m thankful for the education I received. But I never really “believed” in the entire deal. I never thought I would break out of lower-middle-class serfdom, and had no illusions of marriage or children. 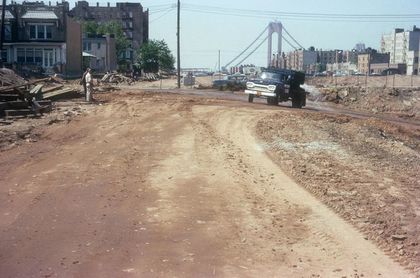 What got me out of bed in the morning? A fascination with infrastructure. When I was a kid, they built a bridge in my back yard.

The Verrazzano-Narrows Bridge was built in five years between 1959 and 1964. Prior to that, there was no way to reach Staten Island from any other part of NYC except by boat. Ironically, you could reach Staten Island from the mainland via three bridges, the Goethals, Bayonne and the Outerbridge. Staten Island retained a small-town feel despite these bridges, though, since a bridge connection from NYC and one from Union County, New Jersey are two separate stories. Staten Island would reap immediate benefits from the new Verrazzano-Narrows Bridge, but Brooklyn would incur immediate losses.

There were long and voluble protests from Bay Ridgers when plans for the bridge were announced. NYC’s master builder and traffic czar, Robert Moses, planned to scythe the long, wide bridge ramp through the heart of the neighborhood in a strip along 7th Ave.. Moses usually got what he wanted, though his plans to build a Battery Bridge and the Brooklyn Queens Expressway through Brooklyn Heights had been derailed and a concurrent plan to build the Lower Manhattan Expressway along Broome St. would eventually be. There was no such reprieve for Bay Ridgers, and fully 7000 residents were displaced. 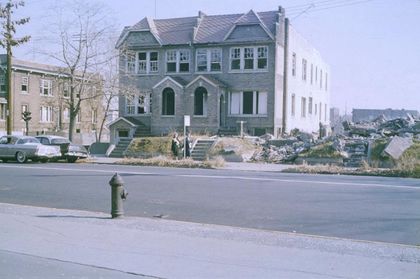 The above two pictures show the progress the city made in eliminating the buildings along Fort Hamilton Parkway. Every street between 65th and 92nd Sts., as well as 7th Ave., saw hundreds of homes torn down. Our home was across the street from a triangle-shaped park formed by the intersection of Ft. Hamilton Parkway, 6th Ave. and 83rd St., just missing the red zone. One problem was that the city, having torn the buildings down, retained acre after acre of empty lots before construction began. Rats and vermin became a problem.

At length, after a couple of years, the residents were moved out and paid off, and the homes and apartment buildings demolished. Steam shovels and dump trucks moved in and began moving tons of real estate to make way for the Gowanus Expressway. Seventh Ave. would begin a new role as the service road on either side of the new expressway.

I’d dig in the dirt in the triangle park, paving roads with my hands and plastic scoops, imitating the progress the construction guys were making across the street in the trench. I was fascinated with lampposts, then as now, and in the early-1960s, the city was transitioning away from ornate cast iron poles with bust scrollwork to simple, unadorned aluminum poles. All this also registered on my infrastructure-infused mind. At home, I’d fill drawing tablets with drawings of lampposts in various styles, old and new. I can still draw them in the same style I used back then.

I was also fascinated with the change to the street grid pattern the expressway was making as dozens of streets were closed off. I began drawing street grids and continued this fascination well into adulthood. Framed versions occupy my walls as well as those of friends and relatives. 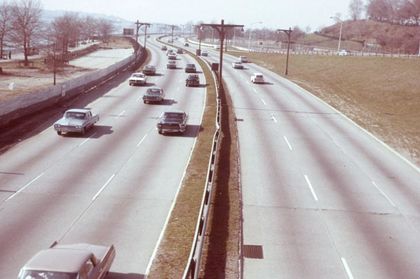 Looking at the Belt Parkway from the 4th Ave. overpass. A bicycle path accompanies the parkway between the 69th St. pier and Bay Parkway, where in my youth there was an E.J. Korvettes shopping center. I estimate that between 1964 and 1993, when I moved to Queens, I bicycled up and down that path a thousand times. I cycled it during the big blackout of 1977. What else was there to do? I took note of the sad demise of the wooden lampposts, which went back to the parkway’s opening in 1940. All but one is gone on today’s Belt Parkway. 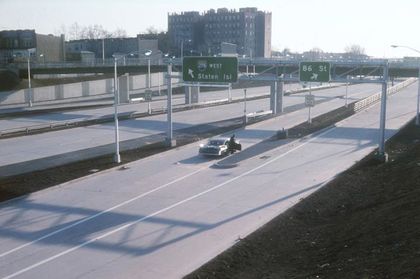 In 1964 the expressway was finished. In the fall of 1964, before the official bridge opening, only the cops, city and DOT officials were allowed on, but that didn’t mean curious kids couldn’t check things out. The massively wide Gowanus Expressway was built all the way to the Brooklyn Battery Tunnel, and in its route on 3rd Ave. it replaced an earlier structure that had served as the old 5th Av. elevated line (the trains had rumbled down 3rd Ave. in Sunset Park). There has always been talk of putting the Sunset Park section in a tunnel, but after Boston’s cost overruns in the Big Dig debacle, that scenario isn’t likely—especially in an “outlying” neighborhood. 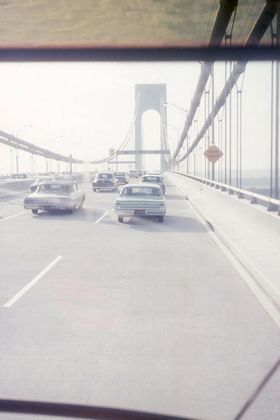 On November 21, 1964 the bridge was opened. By this time, Brooklynites had mostly reconciled themselves to the massive new addition. It was a gala day, albeit a very cold one. Mayor Robert Wagner, Robert Moses and other officials held forth and cut the ribbon. Moses, however, forgot to mention the bridge’s chief architect: the great Swiss engineer Othmar Ammann! A gaggle of antique cars was first across the bridge, followed by thousands of other cars and buses, one of which carried my parents and me.

Interestingly, though Moses refused to allow pedestrians or bicyclists on the bridge, photos reveal there was ample space for a sidewalk. Over the years, various boards and panels have investigated the possibility of including space for non-motorized traffic. Higher fencing and greater security would be needed.

Though I got my share of toys as a kid—I was an only child—I really didn’t need a lot of them. When going for a ride on the bus, I’d take a plastic spoon, a pencil and one of those little light bulbs that came in flash lights, and make my own lampposts. When we went under a bridge, my hand would stand in for the bridge. I was very self-contained as a child and remain so today.