When you're gone, those stories go with you. 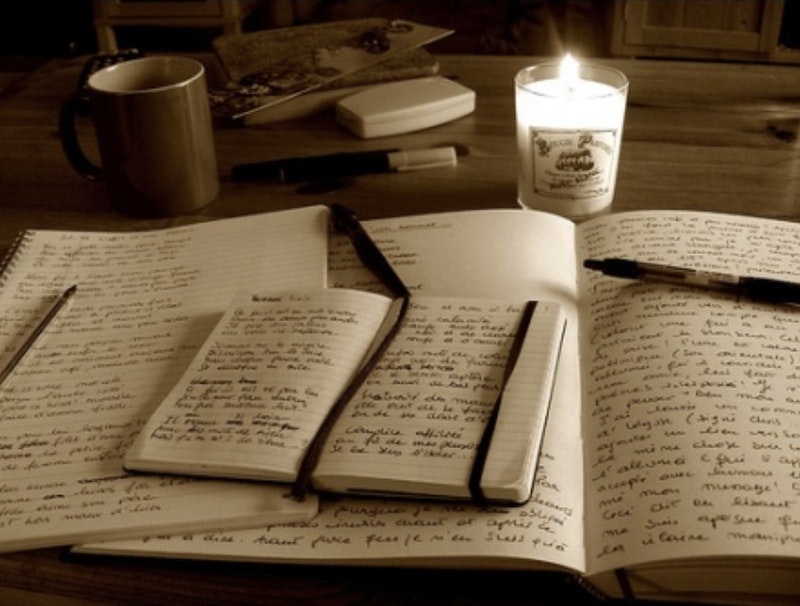 During the 1980s, mom decided to pursue her lifelong dream of writing. She was a natural talent, too. During her teenage years she was active in social causes and engaged in a number of letter-writing campaigns. Later she’d write more letters, as well as musings and short stories. Some were published; some were not. But she enjoyed it nonetheless. While being published would have given her a great sense of accomplishment, she got more joy out of the actual process of writing.

On Saturday afternoons, mom would sit at the desk dad built for her in front of their bedroom window, and there, accompanied by a cup of coffee, a cigarette, and the Olivetti Lettera 36 typewriter given to her by her great uncle Doug, who knew she had a gift and wanted to nurture it, she made it happen. She spent hours in front of that window in thought, turning her thoughts into words on paper.

Because she worked full time and took care of dad, us kids, and the household, mom had very little time to herself, and so we knew when mom was sitting at her desk, and we heard the hum of the electric typewriter, it was an absolute Do Not Disturb zone. When she was writing, she was happy. Looking back, I wish she'd had more time to do it. Unfortunately, writing once again took a backseat to the more important things in life—work, family, household and other responsibilities. After a while, the notes and manuscripts were placed in binders, the dusty Olivetti was stored in its case, and the desk in the window disappeared, replaced by a red trunk full of old birthday and holiday cards, report cards and other mementos. It still sits there.

Mom stopped writing because she just didn't have the time. Later, after the kids were grown, she had at least some time, but not quite the mindset. And then 11 years ago when dad died and she was on her own for the first time in 43 years, she had plenty of time and the mindset, but she had no idea where to begin. That was the consequence of waiting so long. So much had taken place in life between the time she'd stopped writing and the time she wanted to restart it that she just didn't know how to get going again. Frustrated, she put it off, hoping that answer would come to her.

I encouraged mom to pursue her dream again. I told her that if she was unsure where to begin, just start with what she knew—her life. She had loads of material. I knew eventually that would lead her back to fiction writing. And while she really wanted to, she still could not figure out how to bridge that decades-long gap and get back into it.

I’ll be honest; urging her on wasn’t a completely selfless gesture. While I knew the experience would be very cathartic for her, I also was doing it for my sister and me. With mom’s parents, aunt, and sister gone, mom was the only person left to talk about what it was like to grow up in the time she did. She was the only one left to tell us more of the stories she’d learned from her parents and grandparents. Mom had been telling these stories since we were kids, and we enjoyed them, and there were always others to tell. The more she talked, the more we learned, not just about our family, and mom, but ourselves too. One afternoon several months ago, mom and I were talking about her writing again and I told her point blank: "When you're gone, those stories go with you. There's no one left to tell them."

Mom passed away a few weeks ago. We weren’t expecting it. With her went all the untold stories; the pages that would've been overflowing with thoughts and ideas will forever remain blank. In trying to cope with my grief, the only solace I find is that I’m suddenly inspired to pick up where she left off.