Curves are flattening, numbers of infected and dead are decreasing and people are not freaking out so much. 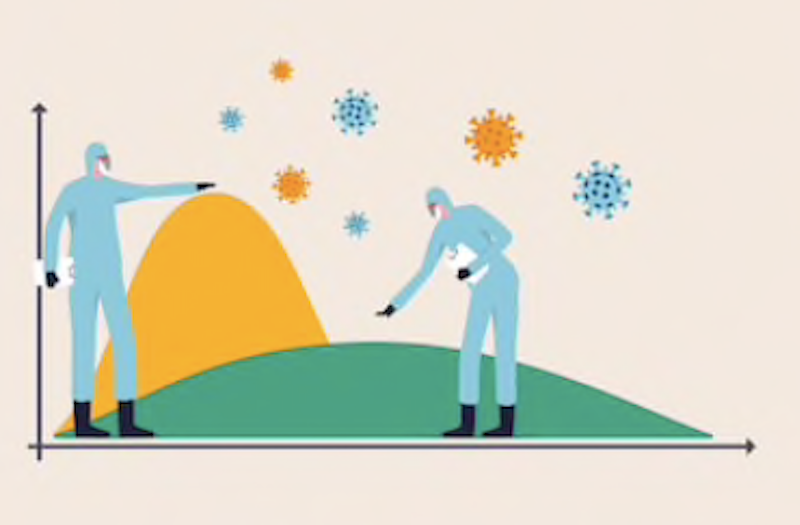 I’ve heard how we all need to settle down—dial it back about 25 percent as Wayne from Letterkenny says. After all, COVID is not The Plague, The Black Death, the waves of bubonic plague that swept over and devastated Europe after 1348 by killing between one-third and one-half the population. True enough. COVID is not The Plague. And, since I’m washing my hands, live on a Canadian farm and avoid people, I’m aware of but not worried about COVID. I’m worried about what comes next. Why? Because COVID and The Plague are similar in many ways that don’t have anything to do with epidemiology and everything to do with psychological, sociopolitical and economic patterns.

The Plague came at the end of a long period of economic growth. In the slower pace of Medieval Europe, that means many centuries of growth. Historian Robert Lopez viewed these centuries of growth as the commercial revolution of The Middle Ages that saw an explosion of both the population and economy. Not since the supply chains and trade centers of the Roman Empire, had Europe experienced such economic stability and prosperity. Similarly, the past few decades of our dramatically accelerated era have witnessed tremendous economic growth across the globe, despite the crash of 2007-08. Billionaires abound and the average person’s overall lifestyle (if not their actual buying power) has improved due primarily to globalization.

Not all’s been positive, as wars in the Middle East, famines in Africa, global recessions, political instability bordering on insanity and a changing climate have wreaked havoc on humanity. As recently as six weeks ago, this cycle continued as people loudly criticized some world leaders, experts called for another global recession and scientists warned of an imminent climate collapse.

James Goldsmith observed that similar trends were at work in various crises of the Late Middle Ages. The climate was changing: the first phase of The Little Ice Age brought much colder winters and cooler summers to all of Northern Europe. Political upheaval devastated most European countries in the form of civil wars, national wars between European powers and pressure from external threats such as the Mongols. Famines such as The Great Hunger—primarily caused by war and climate change—swept Europe. Last, economic growth stalled as the limit of Europe’s agrarian and proto-technological post Dark Ages economy was reached. Like a sour cherry on a sundae, then came The Plague in 1347.

By the end of The Plague, roughly 1400, the European population had bottomed out at about half of its pre-plague level. Consequently, fewer people were working and consuming. Economic activity, driven by demand, was drastically lower than 100 years earlier. Europe was in the grasp of a post-plague recession.

Under COVID, non-essential industries across the globe have experienced sector-wide shutdowns. The hospitality, tourism and retail landscapes are ghost towns; schools, museums and art galleries are closed and cute animals, who are becoming social media stars, populate shopping districts. The unemployment rolls have jumped by about 100 million worldwide. Despite governments injecting tens of billions of dollars into their economies, the global economy, driven by demand, will shrink. We’ll enter a colossal recession that’ll be blamed not on economic causes or political carelessness, but on a virus. Something beyond our control; something like a flood or hurricane; something we just have to get through. Stay strong. Letterkenny’s optimists would say, “Tough break boys, pitter-patter…”

That can work in the short-term. However, Premier Doug Ford of Ontario, Canada said last week he believes we could be in this situation for another 18 months. If his prediction is correct and has wide application, we’ll have to deal with economic calamities while gripped with the fear of the second and third wave of COVID, until late 2021.

That could work too. It’ll be tough but as with post-Plague Europe, our economy will improve as demand slowly and necessarily begins to increase. As in the late-14th to early-16th century, jobs will be regained or found, wages will rise, credit will be given and people will eventually have more money to spend on consumer goods. In fact, by the 16th century, Europe was back on its feet, with a healthy prosperous economy enjoyed by millions.

The 16th century? That’s 150 years later. Here’s the problem with economists who take the macro level view: everything improves. This isn’t simply a matter of time; it’s a matter of impact and reaction. Between the end of The Plague and the early-16th century, as nations were impacted by and reacted to the recovery, Europe was engulfed by conflict in all its forms. Conflict that started with economic and trade measures regarding food, wheat specifically.

These measures are similar to what we’re starting to see with export bans on equipment and supplies; government decreed production of key items viewed as critical to easing the national emergency; price controls; and rejection of profiteering. European history demonstrates that export bans and price controls quickly erode under pressure from governments desperate for targeted items. It also shows that these measures will likely spark conflict.

By the late-14th century, England was desperate for wheat. The immediate reaction was to punish profiteering by those transporting wheat from town to town seeking the highest prices. That worked temporarily in a few sporadic cases, but the demand for wheat continued. So did the panic buying of it.

In response, the government instituted price controls on wheat to ease growing panic among the populace. Supply and demand stabilized and things calmed things down. However, England was a small closed system that again started to run out of wheat. Out of desperation and an effort to attract foreign suppliers, the government offered a premium on wheat. Suppliers from Europe rushed to fill this demand and soon France experienced a shortage of wheat. In response, France introduced a ban on the export of wheat, not explicitly to England, but that was the point. While relations between France and England deteriorated, inflation in England skyrocketed, launched by its own government driving up the domestic price of wheat by paying a premium to European suppliers. These forces sowed the seeds of military conflict between Scotland and England; and England and France.

In Europe, it started with wheat. For us, it’s masks and respirators. Gov. Andrew Cuomo stated New York would pay a premium for this kind of equipment. Few in New York criticized him for this and virtually everyone understands why he did it. Yet, those outside New York, affected by his decision, wonder, “Don’t we need respirators and masks?” as their suppliers rush to fill this highly profitable market. Governments around the world are scrambling to procure medical equipment and supplies. As health care systems are overrun with COVID cases, governments will become desperate for those items.

Currently, opinion-makers and “influencers,” trained by the hot-take world of social media and depending on their country of residence, have fanned the flames of conflict by pointing an accusatory finger at foreign manufacturers or foreign buyers. Governments are forced to respond in an effort to “take any measure to protect the health” of their citizens. Saner heads are standing up to governments, however. 3M executives opposed Trump’s decision to ban the export of masks to Canada on ethical grounds. Time will tell if their stance can withstand the power of widespread criticism.

The prescription for these trends is to realize that we’re not medieval England or France. We don’t live in small worlds but rather one large interconnected one that has the capacity to respond to a pandemic both viral and economic, rationally. Curves are flattening, numbers of infected and dead are decreasing and people are not freaking out so much. In other areas, like the US, we’ve seen the wave sweep the nation, panic starting to take root, and the economy start to wobble. If saner heads prevail, this will pass and we can avoid the kinds of conflict that swept 15th century Europe.