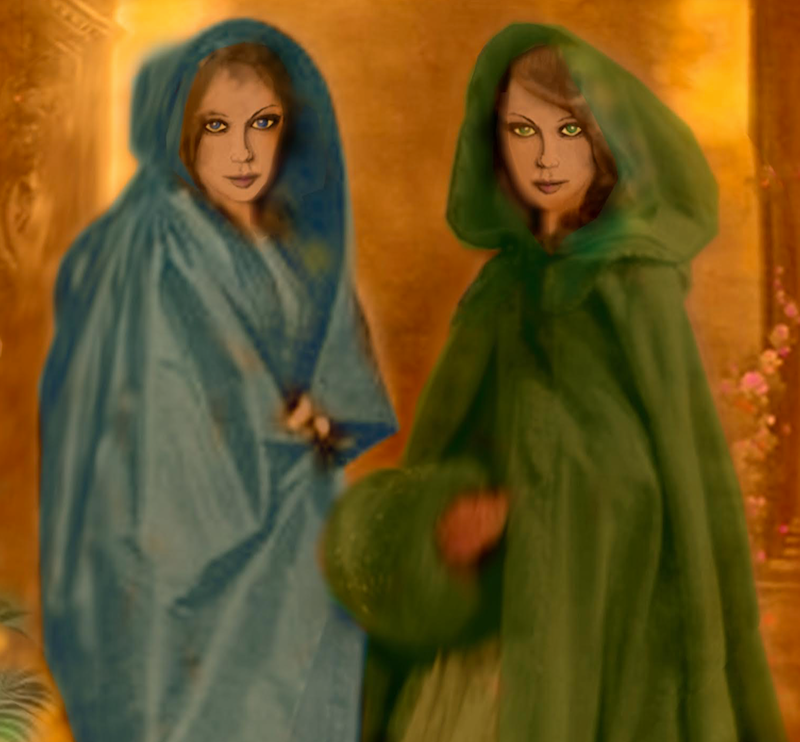 Before electricity and railroads, with only a single oil lamp to guide them, Violet and Polly braved the morning darkness. The twin sisters were clad in tailored velvet hats and cloaks—the epitome of youth and beauty—smelling of jasmine. Ready to board a reserved horse-drawn carriage, their pockets held nicely-wrapped napkins containing biscuits and boiled eggs.

The ground was wet. The girls’ boots were caked in mud.

“I wish this was over.” Violet said.

“Me too, but not quite yet. Poor stupid us. How did we get this point?  Polly asked.

“Guess, that’s one we’ll have to figure out.” Violet replied.

Polly grinned and wrinkled her nose, “I have an idea.”

In the tree above, an owl hooted its approval before blinking.

During the early-1800s, Appalachian Mountain frontier life was viewed as a working paradise by homesteaders. Violet and Polly begged to differ. At daybreak, against their better judgment, they’d depart Cumberland, Maryland—a small town where George Washington once spent the night.

The teenagers were born with rocks inside them. Around the barnyard, Violet and Polly milked cows and cleaned coops. The crumbs under the kitchen table were taken care of by the chickens on their own.

They were furious after being informed, “You are being bestowed the gift of a holy calling”—confirming a Catholic recruitment effort against their will. The Church quickly caught wind of a family tragedy. The farm was sold. A displeased Violet and Polly were sent to Baltimore. A lot of things happen in this world you don’t understand.

Cumberland saw a terrible rise in tuberculosis; people spitting blood in the muddy streets, dirty used handkerchiefs everywhere. Even mules pulling wagon carts through town avoided the red sienna muck because it was so unpleasant. The girls’ parents perished in the outbreak.

Elizabeth Ann Seton (1774–1821), a child of the Age of Enlightenment, had a glint of brilliance in her eyes. She’d later become America’s first saint. The Episcopalian widow was once a fashionable high-society Manhattanite. In 1805, her conversion to Catholicism coincided with her joining The Daughters of Charity. Elizabeth Ann took on a new name: Mother Seton.

Catholics were loathed in the United States throughout the 19th century. Would they be loyal to a new nation or the Pope, was how most regarded the situation. Some of the mainstream sentiment bias stemmed from converting young people to Catholicism. Most people in America hated immigrants from poor nations like Italy and Ireland. Signs reading “No Irish Need Apply” were displayed in city storefront windows. There was an unspoken Catholic veil of silence; prescribing questionable activities be handled in a calm and discrete manner. Naturally, that made it notorious for perpetually obscuring people’s thoughts.

In Baltimore, the clergy’s Bishop John Carroll was aware of the Catholic predicament, but steadfast in his efforts to bolster the Church. With hopes for advancing religious education, he discussed pioneering ideas with Mother Seton who lived in New York. In 1808, the mother of five made her way to Maryland and helped establish a boarding school for young females on Paca Street.

Back in Cumberland, Meg Kramer liked hard cider. She usually stopped over to say “Hi” when Violet and Polly rode into town on horseback with homemade apple sauce. Boy, she’d chew your ears off after telling the sisters how much she adored the sauce. “Give ‘em hell y’all.” Meg yelled waving farewell to her departing friends. Meg became unsteady, then landed headfirst on Main Street after tumbling out of a third-floor window. Rest in peace Miss Meg, she was a good Protestant.

The carriage headed down the hill. Most of the country’s population lived on rural farms. During the journey, Violet and Polly rehashed escape plans. People were yet to go further West in droves. Traveling was dangerous. Navigating the dirt paths through Maryland’s forests and hills made it crucial to reach overnight accommodations by late afternoon.

An expert coachman, husky-voiced Harris told the twins, “Going to be a rough ride at first ladies. Things will settle down after a few miles.” He tightened the reins with thick, rugged hands. Whenever Violet and Polly heard a leather strap or whip snap, they snickered. Harris just scared a copperhead snake or startled a black bear. Temptation aside, there were a few whispered words. Underneath his unemotional exterior, Harris was a man of the Bible, like most Protestants.

Animal-drawn carriages ruled the rutted pathways of America. A strip of overgrown weeds grew down the middle of grass paths. Traveling the bumpy roads and mud-filled ditches wasn’t easy. Typically, carriages followed alongside rivers and streams. Waterway routes were frequently serviced by packet boats that carried mail and freight. Maneuvering difficult terrain, even with decent horses, a trip could turn hazardous in a split second—especially crossing a dangerous steep ridge blocked by oxen pulling an overstuffed freight cart.

The coach headed towards a crest of slick grass. Then it started to slide. Down below, a steep gorge cliff with jagged rocks and sharp spires rose through the mist of the majestic Potomac River. Violet and Polly gasped in fear as they clung tightly to one another. In their most desperate hour, they needed a miracle.