The Most Hated Man in Comedy

If I asked you to name the most hated person in comedy, who would it be? 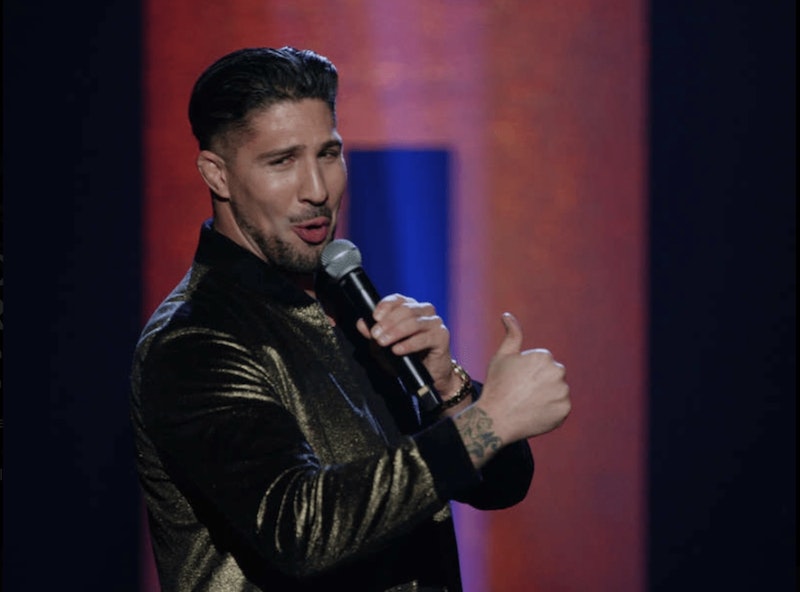 It's an easy question. His name is Brendan Schaub, a cross between Forrest Gump and a 200-pound tub of protein powder. A former professional mixed martial artist, Schaub is built like a brickhouse; he also appears to have the IQ of one. Famously, the 39-year-old referred to Africa as a country—and he wasn't joking. He also referred to Jon Jones, a black UFC fighter, as Jon Africa, although this comment could be considered more racist than unfunny.

Born in Aurora, Colorado, Schaub, who goes by various nicknames including "Big Brown," "The Hybrid" and "The Sting" is easily the most loathed standup comedian in the US today. A podcast veteran, Schaub can be found on The Fighter and the Kid podcast and the Below the Belt with Brendan Schaub podcast. He also, up until very recently, co-hosted the King and the Sting podcast with fellow comedian Theo Von, a truly hilarious individual who was very much the yang to Schaub’s yin. The Simon to Schaub’s Garfunkel.

Schaub is many things, but funny isn’t one of them. A number of his peers seem to agree. It's easy to see why. Schaub’s first comedy special, You’d Be Surprised, has an average score of 1.5/10 on IMDB. I watched the special,and 1.5 is generous. His most recent special, The Gringo Papi, released last year, is even worse. As one reviewer put it, “Schaub's previous special set the expectations at a historic low and yet somehow this new special failed to greet even that generous threshold.”

It’s not a crime to be unfunny. But Schaub’s lack of humor, his inability to deliver one joke of actual substance, doesn’t explain why so many people appear to hate him. Look at the IMDB comments for his first special. They’re not just critical of the jokes; they’re downright nasty. The same goes for the Gringo Papi special, where the comments come in many varieties: sarcastic, mean, condescending, sometimes hilarious, but never complimentary. Having had the misfortune of watching the second special as well as the first, many of the distasteful comments are somewhat warranted. Gringo Papi is filled with jaded stereotypes, casual racism and bad Asian accents. If Louis C.K. is The GOAT, Schaub is The DONKEY.

There hasn’t been this level of hate directed towards a comedian since Carlos Mencia burst onto the scene more than two decades ago. In 2005, Joe Rogan, wrote a post that went viral, accusing Mencia of being a plagiarist and a joke-stealer (in comedy, stealing a joke is considered to be an unforgivable sin). Rogan provided plenty of evidence to back up his claims. Then in February of 2007, Rogan confronted the Honduran-born Mencia on stage at the Comedy Store on Sunset Boulevard. Not surprisingly, the confrontation, which was recorded by many in attendance, also went viral. Since then, Mencia has never been the same. His reputation took a beating.

Fast forward a decade and a half, and Brendan Schaub is the one taking a beating. In truth, the criticisms have been coming for a few years, ever since his first special aired on Showtime in 2019. As mentioned, Schaub is a retired mixed martial artist. He retired in 2015, then, somewhat oddly, decided to pursue standup comedy. What was more odd was his almost instant rise to fame, and the ease in which he was able to secure his first special with a major network. Usually comedians must perform for many years before they release a special. The aforementioned Rogan, a friend of Schaub’s who began his comedy career in 1988, didn’t record his first special, a comedy album, until 1999. Bill Burr, one of the finest comedians of all time, started his career in 1992, but didn’t drop his first hour-long special until 2008. Why?

Because comedy’s a craft; it must be honed and perfected; this takes time, years, 16 in the case of Burr. A comedian starts off as an apprentice, a warmup act, then, when ready (and if he or she is good enough), moves on to being a headline act. Comedy also involves suffering, a Sisyphus-like struggle; a performer must die many times on stage before becoming the complete product. There are certain steps that must be taken, a number of unwritten rules that must be followed, before one is ready to put out a special. Schaub didn’t do the work. Still, somehow, he landed a special. This ruffled feathers in the comedy community. A major reason Schaub rose to prominence so quickly involves his friendship with Rogan. Schaub has appeared on The Joe Rogan Experience (JRE), one of the most popular podcasts in the world, countless times. When Schaub first entered the comedy scene, Rogan treated the then 32-year-old like a younger brother. To appear on JRE, one must be a person of genuine interest—a scholar of repute, a talented musician, a top-level mixed martial artist, or a talented comedian. Schaub is none of these, yet he was invited on repeatedly. This isn’t a knock on Rogan, a man I respect. It’s his podcast. But, like the special, the fact that Schaub managed to land a spot with Rogan angered many comedians. A seat at the table with Rogan must be earned. Schaub, many argued, never earned those generous invitations. This explains some of the animosity towards Schaub, but not everything.

To understand the ill will towards the controversial comedian, explore the murky underworld of Reddit. You’llfind thread after thread dedicated to ridiculing Schaub. I read through thousands of comments that all hammered home the same message: Schaub isn’t just a bad comedian; he’s also a bad human being. He’s not to be trusted. On tfatk, a subreddit that was initially created by fans of Schaub’s The Fighter and the Kid (TFATK) podcast, 86,000 members—or homeless cats, as they refer to themselves—post stuff about the comedian, none of it flattering. The fans have turned. Why?

It’s because Schaub appears to be someone so insecure that he’ll attempt to destroy anyone who threatens his fragile ego. As Ashe Ryland, a writer who covered the Schaub saga in great detail, has noted, “Schaub is the opposite of humble and self-aware. It’s as if it is impossible for Schaub to offer anyone an ounce of praise without adding a negative comment behind it, never letting anyone appear superior to him. At least in his own mind.” She then referenced an episode of Below The Belt that was released in October of 2021. On that episode, Schaub discussed Tyson Fury, the British boxer who has spoken candidly about his struggles with depression and thoughts of suicide. Immediately after declaring his love for Fury, Schaub said that if he had to hear one more thing about Fury’s mental health issues, he was “going to slit his fucking wrist.”

Besides being unfunny and unnecessarily cruel, Schaub is petty. The man who prides himself on being a comedian can’t take a joke. Schaub has, according to credible reports, threatened to sue various comedians for making jokes at his expense. The comedian also worked tirelessly to censor a rather interesting, far from flattering documentary about him, aptly titled I’m Not Surprised: The Brendan Schaub Documentary.

Schaub also appears to be a bully. Last year, on an episode of the H3H3 podcast, hosted by Ethan Klein, the much-loved comedian Bobby Lee said he was mercilessly bullied by Schaub (as well as Bryan Callen, a close buddy of Schaub’s and co-host of TFATK). Schaub later appeared on Tiger Belly, a podcast hosted by Lee and his former girlfriend, Khalyla Kuhn, and admitted to intimidating the diminutive, peaceable Lee. Schaub has also bullied another amiable soul by the name of Ariel Helwani, a highly-respected MMA reporter. Ask anyone in the MMA community, no one has a bad word to say about Helwani. No one except Schaub.

It gets worse. In 2021, Schaub’s then-pregnant girlfriend took to Instagram to disclose some terrible news. She’d just experienced a miscarriage. She needed support. On that very same day, however, as she lay in a hospital bed, Schaub shared a now deleted photograph of him in a hot tub with his bros. Schaub also stands accused of cheating on his partner multiple times. Not only is Schaub unfunny, he appears to be unwise and unkind.