The Wedge Issue of Transgender Athletics

Henig recently wrote about the decision to switch from being a dominant women’s college swimming athlete to being a subpar men’s swimmer. 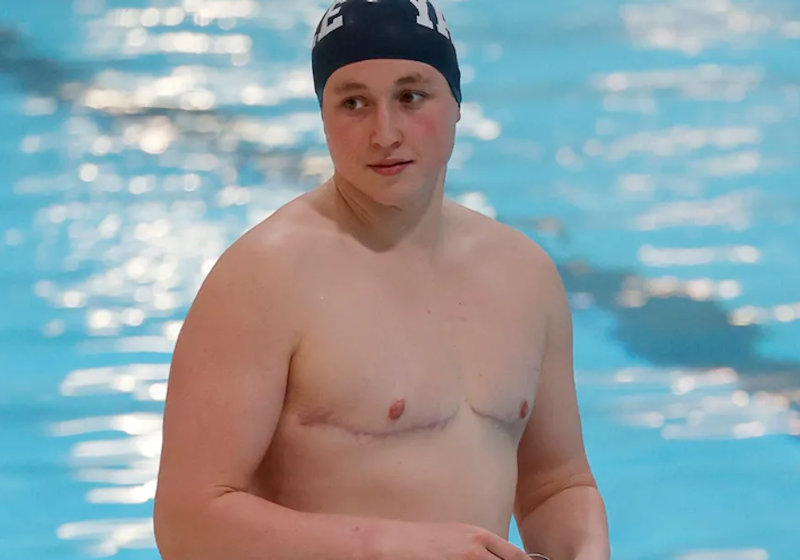 Iszac Henig was one of the best college swimmers in America last year. Now, Henig is one of the worst. Henig, a woman who identifies as a man, used to compete for the Yale women's swimming team. Henig had success competing on the women's side, earning All-American honors. This season, Henig, who’s transgender, competes on the men's side and is one of the worst competitors. Henig’s situation is interesting because it’s part of the transgender athlete debate addressed less often in media but is just as important as the part about males competing against females.

Henig recently wrote about the decision to switch from being a dominant women’s college swimming athlete to being a subpar men’s swimmer for The New York Times. Henig said making the switch meant less success in the pool but served as an affirmation of this transgender identity. "It might not seem like such a big deal to swim on a team that doesn’t align with your true self,” Henig wrote. ”But think about how overwhelming it would be to spend 20 hours a week in a place where you feel you don’t belong. Eventually, for me, that reality made it hard to get out of bed to go to practice."

For those who support transgender athletes competing on a team that matches their preferred gender identity, this presents no problem. However, for opponents of the matter, this is a wedge issue within a wedge issue. Opposition to transgender athletic participation typically exists from two different perspectives. One is that while people accept transgenderism as a legitimate option, they think athletic participation goes too far. Specifically, they don’t think it’s fair for men who say they are women to compete against women in women’s sports.

A few examples exist of openly transgender athletes dominating women’s and girls’ sports. Whenever this happens, it becomes a national news story. Penn had a man swim on the women’s team last year who won a Division 1 NCAA national title. It was a national news story for months. It doesn’t matter that few care about women’s college swimming; it was top news and an example of this ongoing phenomenon of men dominating the competition.

The other example is two guys who identified as girls coming in first and second place in the 100-meter dash Connecticut girls’ track and field high school state championship in 2017 and 2018. I understand why people feel like this is a common occurrence. The media reports on it vigorously, and the internet shares these stories when they come up. However, this isn’t a common occurrence.

I have covered high school sports since 2015. I can’t point to one known instance of a transgender athlete dominating a sport. Between high schools and colleges, I can think of five cases (four college athletes and one high school) of transgender athletes competing for Massachusetts teams. Each situation involves women/girls who identified as men/boys and weren’t standout athletes. I’ve yet to find the boy playing girls’ basketball who scores 50 points per game. In a state with seven million people, male-to-female transgender athletes must exist, but they’re not noteworthy athletes.

We’re not seeing an epidemic of boys who suck at sports deciding they’ll identify as girls so they can be varsity athletes or realize their dreams of playing Division 3 college sports. The other reason why people oppose athletes competing based on their gender identity rather than their actual gender is that they reject transgenderism as a concept. To me, this has always been the far more rational position. Does anyone care about the integrity of women’s college swimming? Herschel Walker ran campaign ads in his U.S. Senate bid in Georgia criticizing liberals for wanting to allow men to compete in women’s sports. Since few single-issue voters who prioritize women’s college swimming exist, I can’t imagine this was an effective attack.

It makes more sense to oppose athletic competition, not because of some perceived idea that men consistently dominate all of these women’s sports. Few cases exist of that happening. In Massachusetts, it’s more common for boys who identify as boys to dominate girls' sports, primarily field hockey and girls' volleyball. I also reported on a case in girls’ soccer in 2021. Rather, what bothers many social conservatives about transgender athletes competing for teams based on their gender identity is that it affirms their gender identity. It has little to do with what’s going on in the game. They don’t think society should promote transgenderism and that policies that promote and accommodate it are harmful.

These people don’t want to normalize something that could result in more people feeling gender dysphoria and body dysmorphia. They’d prefer to see medical professionals treat the underlying problems caused by gender dysphoria individually (like depression, anxiety, and substance abuse) than have people make irreversible changes to their bodies and live a lifestyle that will fracture social cohesion.