Alec Nevala-Lee and John W. Campbell Stick to the Facts

There’s no sense of sprawl here. 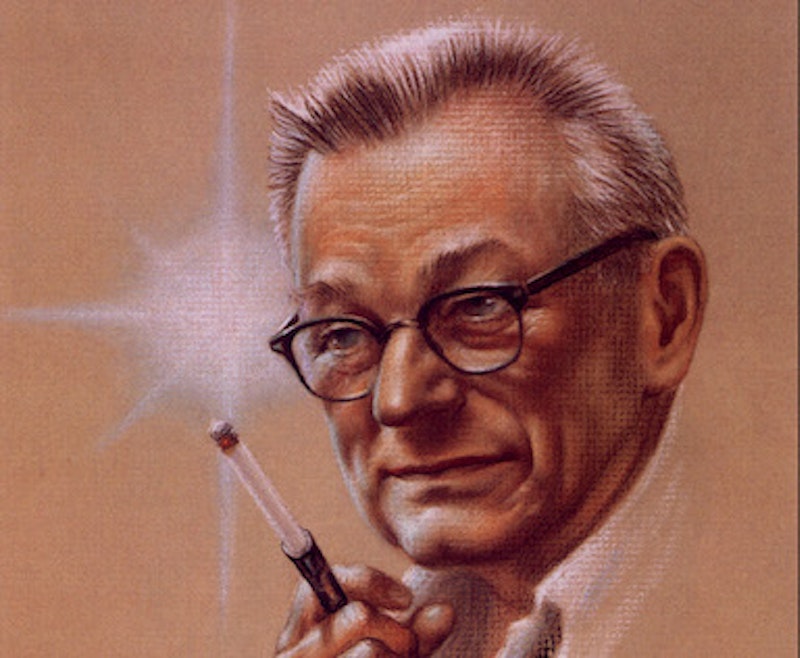 There’s not much to argue with in Alec Nevala-Lee’s recent book Astounding: John W. Campbell, Isaac Asimov, Robert Heinlein, L. Ron Hubbard, and the Golden Age of Science Fiction. That’s a strength and also a weakness. Nevala-Lee’s produced a highly readable joint biography of editor John W. Campbell, best known as the force behind Astounding Science Fiction magazine, and three of his most important writers. But it’s a biography that sticks to the facts of their lives, as best they can be reconstructed. It says little about the content of their fiction.

Campbell took over as the editor of Astounding in late-1937, and swiftly turned it into science fiction’s dominant voice. Campbell’s ability to work with stories was matched by an eye for writing talent; Heinlein, Asimov, and Hubbard were only three of the key early SF writers he published. Campbell also handed out story ideas and plot points to writers, sometimes apparently to see what they’d do with them, sometimes using them as a surrogate for himself.

Campbell was a writer before becoming an editor, and his story “Who Goes There?” is still a classic—it’s been filmed three times as The Thing. His editorship of Astounding can be seen as a different way to get across his favorite themes and ideas. Human beings exploring the galaxy, overcoming alien menaces by the power of reason and determination; the enlightening power of science and technology. The first dozen or so years of Campbell’s Astounding have become synonymous with the term “Golden Age of Science Fiction,” and Nevala-Lee’s book is a solid description of how Campbell was shaped, what happened in his life, how he built a network of writers and what happened to them.

It’s not, for better or worse, an examination of the visions guiding Campbell and his writers. There’s little critical analysis; the greatness of the writing is assumed, which can be grating if one isn’t inherently convinced the writing is in fact great. I’ve never understood what many readers find in Heinlein, and this book provides no hint. I knew little of Hubbard’s Golden Age writing before reading Astounding; I don’t know much more now.

I do now know about Hubbard’s life, though, and that’s where this book shines. A science fiction writer himself, Nevala-Lee’s pored over the many biographical writings left by the principals in his story, and notably has gone through an archive of Campbell’s personal papers. He’s able to create a detailed reconstruction of the private lives of Campbell and his writers, covering their marriages and divorces and forming of friendships and the breaking-up of those friendships.

The prose is smooth, and the structuring of the mass of material is extremely well-done. There’s no sense of sprawl here, despite the book following four main characters and a number of minor ones. Still, at times one wonders about its the purpose. Why are Campbell and the other writers worth reading about? Nevala-Lee isn’t interested in this question at all. The book suffers for it, because without some discussion of the fiction these men produced they dwindle into the status of marginal eccentrics: white American men of the mid-20th century, trying however unconsciously to fit in with the society around them.

Only Hubbard seemed to find the strength to reject that society to make his own, and that was not always a pleasant thing for the people around him. Here again, the book’s lacking. We read that Hubbard was a bigamist, adventurer, fabulist, and occasional occultist, but we get no sense of a whole human character. While Nevala-Lee’s able to reconstruct Hubbard’s lies and adventures, more or less, he doesn’t try to create a sense of who the man was. There’s little sense of a person with a coherent inner life; or, at least, little sense of a person with specific drives. The book remains on the outside.

Similarly, it’s difficult not to think that Nevala-Lee left some of Asimov’s depths unplumbed. As he aged, Asimov became notorious for a predatory sexuality, groping women in what he believed was the role of a self-conscious dirty old man. How did this develop, when he seems to have been more repressed as a younger man? Why did he begin to cheat on his first wife? Nevala-Lee refrains from any kind of psychosexual speculation, and while too much of that in a biography can be a problem, a little bit might’ve been useful to create a sense of Asimov as a personality.

On the other hand, Nevala-Lee does have a good eye for what lines from letters and autobiographical writing to include. If he doesn’t create vivid, coherent characters himself, some vividness does come from the writers themselves. Coherency is then to an extent collateral damage; descriptions people write at any given moment of themselves and their thoughts and actions will not all line up when set side-by-side in later years.

And the details are good. Nevala-Lee doesn’t shy away from describing the more unpleasant aspects of his subjects—Asimov’s handsiness, or Campbell’s racism. Heinlein’s political drift to the right (broadly speaking) is mentioned in passing, and his general idiosyncrasy isn’t discussed much; his nudism is mentioned offhandedly, for example. But then Heinlein has been the recent subject of a two-volume autobiography, and space is limited.

Campbell, the primary subject of the book, has had less written about him than the others. Nevala-Lee observes that Campbell’s never been the subject of a book-length biography, and for filling that gap alone the book has value. It has value beyond that, too; Nevala-Lee makes a strong case, for example, for the importance of Campbell’s first wife Doña and his administrative assistant (really assistant editor) Kay Tarrant.

Unfortunately, the book’s probably best read by someone who’s already convinced of the importance of Campbell and his stable of writers. There’s little analysis of Campbell’s accomplishment, or his themes and how they might relate to his life. How was his fiction related to his recurrent panic attacks? How did his close editing of Tom Godwin’s “The Cold Equations,” a story about the remorseless working-out of physical laws in a rational universe, square with the fact that a year after it was published Campbell was trying to build a psychically-powered mineral detecting machine?

Nevala-Lee doesn’t ask these types of questions, but he’s still produced a solid work of research that will be a useful resource for genre historians. General readers may find themselves a little bemused by a book about the history of ideas which is itself apparently uninterested in ideas. But for someone interested in these men and wondering about the background of their lives, this is an engaging way to learn about them.