Abortion is None of Your Business

Who made the rosary-clutchers the judges? 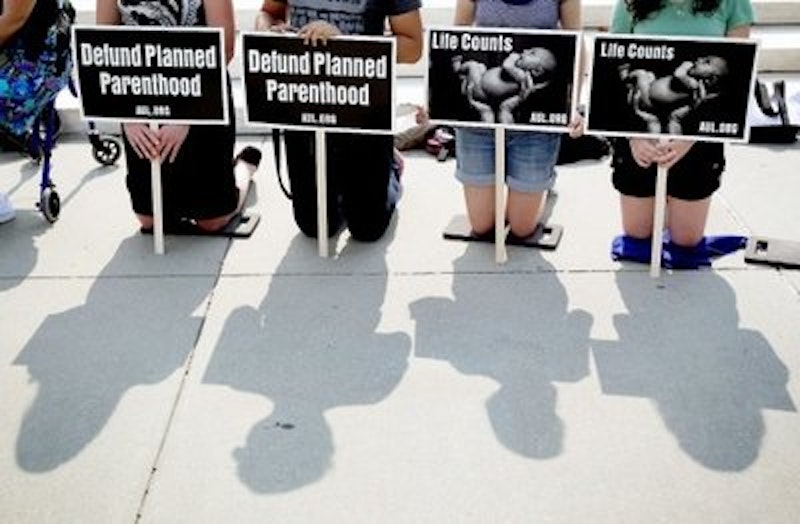 Years ago, I worked at a magazine in a building that also contained a Planned Parenthood. Arriving on Tuesdays, we’d have to cross the line of abortion protesters out front. As a mom of four, I didn’t appreciate rosary-clutching people making the sign of the cross when I drove or walked by, silently mouthing prayers for me. I didn’t pray for them. They annoyed me.

One day I watched as a tearful teen girl, her elbow held by her boyfriend, crossed the street to pass the prayerful; the teens’ eyes were cast downward, clearly weighed down by the shame they were expected to feel. What gave that group of Bible-toters the right to decide that this teen couple should bear and raise a child, the cost of which would be equally disparaged by the same conservatives?

On Good Friday last week, I was in that town and happened to drive past the building. There were about a dozen abortion protesters, huddled together in the rain. Raindrops dripped from rosaries. One protester waved a huge sign that read “WE CHOOSE LIFE.”

Unfortunately, we still live in an age where a woman athlete and mother can be asked in an interview if she ever considered an abortion. Opinion articles are still written bemoaning the lack of “pro-life” coverage, like this one in Mediate by Lauren Ashburn complaining that: “…half of the country who believe that abortion is murder? They’re without a bully pulpit or a chance to make their opposition known. And that’s a shame.”

And Arizona is becoming the first state in the nation with a requirement to inform women that abortions can be reversible. “Women who have initiated a medical abortion process and who change their minds for whatever reason should not have their babies stolen from them because Planned Parenthood or any abortionist withheld life-saving facts or withheld information,” anti-abortion advocate Dr. Allan Sawyer said in testimony before the legislature.

I’m stunned at the abortion debate in our nation. Stolen babies? Though some states continue to work to undermine it, the battle’s already been fought and won. The 1973 Supreme Court Roe v. Wade decision held that a right to privacy under the 14th Amendment to the Constitution Amendment due process clause extended to a woman’s decision to have an abortion.

Needless to say, this landmark decision doesn’t remove our First Amendment constitutional right to free speech, and people have many varying and vehement opinions on abortion. I was raised Catholic and never had an abortion, though I’ve had friends and family members who did. When asked to attend an abortion rally in college, complete with wire hanger-waving, I stopped short of that level of activism. Plainly: it’s the law that each woman has the right to make choices for herself. Having felt the movements of fetuses responding to my touch, watching my belly as the tiny creature inside me has the hiccups, and having experienced three miscarriages, I wouldn’t want to debate when life begins.

But my opinion on that has nothing to do with how I feel about whether other women should have the freedom to choose abortion, which should forever remain safe and legal. No one should judge a woman for choosing to end a pregnancy; it’s a choice that already isn’t easy. It’s not up to us. It’s up to her. It’s especially not up to religious zealot anti-abortion rosary-clutchers.

I choose life, too. I just don’t choose to be an idiot.