What you hear at a diner. 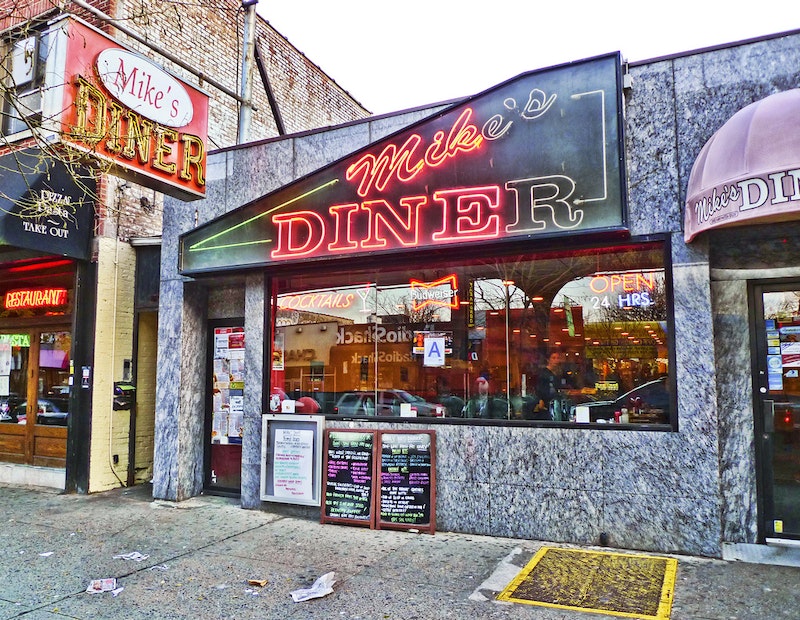 The man in the blue suit walked into the diner and went straight to the booth where the man in the pinstripe suit was reading his newspaper and eating breakfast. He dropped an envelope on the table and sat down across from him, studying his breakfast carefully.

"Western omelet is it today? That all you ever eat is eggs, J.R.?" said the man in the blue suit.

"Meaning every single time I’ve seen you, you’re eating eggs. Omelets, fried eggs over easy, scrambled, poached, you name it," said the man in the blue suit. You ever consider branching out a little?

"This is the only place you’ll meet me, always at seven a.m. What am I supposed to eat, nigiri sushi?" said J.R.

"The fuck’s nigiri? All I’m saying, sometime you might want to take a look at the menu section called ‘Hot Off the Grill’ that has stuff like pancakes and French toast. You know, non-egg options,” said the man in the blue suit.

"Oh, you mean the section that lists French toast as one option, and pain perdu as another?” said J.R.

"So? French toast is pain perdu. They’re one and the same. Dives should at least understand what they're writing in their menus if they want to get pretentious,” said J.R.

"So you boycott an entire section of the menu because you have a quibble with the wording? That’s a good one, J.R. Men of principle are a dying breed," said the man in the blue suit. “Like you don't already have enough shit to worry about in your messed up life."

"It’s annoying, is all I’m saying," said J.R., putting the envelope in his coat pocket. “So we do the usual? Meet here in a week, same time and I pay you back, with the usual interest rate? No discounts for frequent fliers?"

"A little too frequent if you ask me. I’m giving you a discount as it as, since I like you," said the man in the blue suit. "And, who knows, maybe I'll need legal advice some day and you can make it up to me."

"You like the cut of my jib, do you? Look, I always pay on time, what more could a loan shark ask for?"

"Don’t call me a loan shark. I’m a businessman. You’ve been watching too many movies or something, J.R. And if you’d like a little professional advice, I’d say ease up a little on that sports betting habit of yours. You saved your ass a few times, but we both know how that ends. You’re late on a payment, our interactions become less cordial," said the man in the blue suit. "I stop giving you menu recommendations."

"What I’m thinking, in your line of work, charging eight percent interest per week compounded weekly, you don’t get to choose your job title. It's just the price you pay for those interest rates that are not exactly within the legal limits," said J.R.

"Now that’s rich, coming from a personal injury attorney. Tell you what, I’ll be a businessman to you and you’ll be a lawyer to me, and not something else I might call you, if you catch my drift. Another thing, I didn’t come to you. You came to me. So if you don’t like my APR, why don’t you try Wells Fargo," said the man in the blue suit. "I hear they're very receptive to basketball betting loans."

"So what happens if I can’t make a payment? You break my legs?" said J.R.

"Those movies again, J.R. Think it through. How would you pay me back with broken legs? Anyway, I’m just the middleman, so if you give me bad news, I just pass it on to the boss and he takes over. Pretty sure he won’t send you a dunning letter though," said the man in the blue suit.

"Could happen a number of ways, none of them pleasant. It might start with an unsavory sort visiting your office. Escalates from there. Could get embarrassing, or worse."

"He wouldn't be a businessman like you, you mean?"

"He'd be more the kind who likes to be a bull in the china shop of your life. He won't care what he breaks. For a certain type of sociopath, it's a dream job. They never feel like they're working because they get paid to do what they love, which is to fuck people up. Long and the short of it, you’d quickly call your parents in Sarasota, and they’d give you the cash you owe me within a few business days."

"How do you know where my parents live?"

"You insult me, J.R. I told you I'm a businessman. You think I’m gonna give you this kind of cash without doing due diligence? Loans require collateral, and you already sold your nice new Mercedes when Duke couldn't cover the point spread last month. Remember that 'sure thing'? I really don't like taking hard-earned money from retirees trying to enjoy their golden years in Florida who get forced into covering for their playboy son's misdeeds. Why don’t you just give me back the envelope, and that’ll be that. We’ll just be friends."

"You mean still meet here and have breakfast?" said J.R.

“Sure, why not? I'm here every morning anyway. The pain perdu will be on me, and you'll see what you've been missing eating all these eggs," said the man in the blue suit.

“For reasons you can probably surmise, that isn't necessary. Why don’t you just keep calling me Teddy?” said the man in the blue suit.

“Surmise, huh Teddy? I like that. Bull in the china shop of my life? You’re one eloquent loan shark," said J.R.

“And you’re one broke-ass ambulance chaser, J.R.,” said the man in the blue suit.