The Excruciating Paradox of Anti-Art

Arte Povera at the Philadelphia Museum of Art. 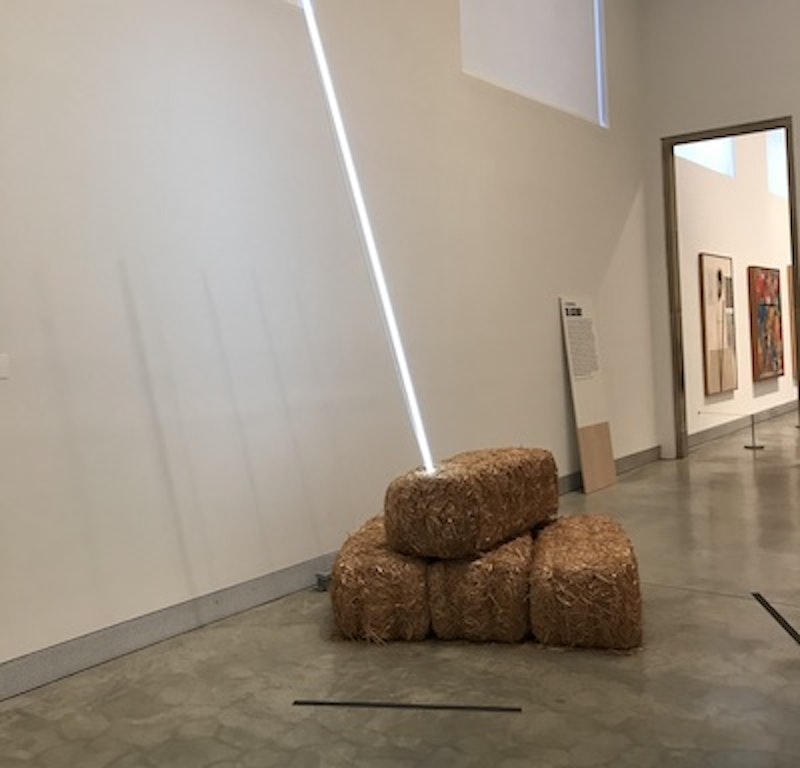 The two sorts of people most strongly opposed to art are philistines and avant-garde artists. It wouldn’t be wrong to regard dada, pop, Fluxus, conceptualism, and a portion of the art produced from the 1960s to now as a series of attacks: on the museum, on artworks as discrete, commodifiable objects, on the artist as a lone genius, on the fetishization of the “masterpiece,” and so on. This makes for a paradox, as anti-art artists have come to be central to the story of art in the period, and it presents an apparently insoluble problem to museums, in that they’ll be charged with conserving and exhibiting works that their makers conceived as dedicated to the destruction of the institutions in which they now appear. When art that’s opposed to art is incorporated into the museum and into art history, it becomes available for us to experience now, and it’s profoundly falsified.

No criticism of art and its institutions from within was more pointed than that of Arte Povera, the Italian art movement of the 1960s dedicated to roughness, arbitrariness, to modest or despised materials, ephemeral performances and self-destroying artifacts, small jokes and huge assemblages. But if artists such as Michelangelo Pistoletto, Giovanni Anselmo, Mario Merz, and Luciano Fabro thought they were making things that couldn’t be sold or that would no longer exist after a few minutes or a few years, they didn’t reckon with the art world's ability to incorporate almost anything, including attacks on itself, and to re-narrate them as part of high-art history.

The Philadelphia Museum's one-room exhibition Arte Povera: Homage to Amalfi '68 encapsulates the problem, and perhaps resolves the tension in the only way it can be resolved: by letting the contradiction be, by not trying to cure it or erase it, or even by intensifying it to the breaking point. The show pays tribute at 50 years' distance to a three-day event in the southern Italian city of Amalfi, centered in its ancient, cavernous, then-filthy Arsenale. The anti-art squads of Arte Povera spent three days scattering dirt or branches, stacking things against the walls, collaborating on unrehearsed performances, hanging maps of Italy upside-down from the ceiling, and holding radical anti-capitalist workshops. You can get the whole vibe from a film made at the time, screened in a separate room at the museum.

In what amounted to a manifesto for the event, Germano Celant said this:

Today society presumes to make pre-packaged human beings, ready for consumption. Anyone can propose reform, criticize, violate, and demystify, but always with the obligation to remain within the system. It is forbidden to be free. Once you create an object, you always have to remain by its side. That’s what the system commands. This expectation is never to be frustrated, and once an individual has assumed a role, he has to continue to perform it until death.

He's saying that being an artist in 1968 is being a capitalist agent of death, and so artists should cease to be artists and become something else, or should so strongly re-conceive the concept of art that no one will hang paintings on white walls ever again.

The re-presentation of the Amalfi event, on the other hand, takes place in a white cube: that is, in a typical contemporary gallery space at the PMA. There are no people except polite art viewers and guards, and the art holds still. There’s no yelling, grinding and sawing; there are no workshops on Marxist theory and the alienation induced by technology, no festival of subversion spilling out onto the street. Each object, appearing carefully preserved, is isolated. It’s not perfectly clear whether a number of these objects appeared in the original event, or were re-made or simulated in the time since, specifically so that they could be placed in museums, photographed carefully and sold. (I think the show is inadequately documented, and no publication with further information about the provenance of specific objects or the conception of the show itself seems available, on paper or online.)

In its quiet way, this show is about as radical a displacement as could be accomplished in the art world of the last half century, and appears to turn the work against itself by replacing it in an inversion of its original environment, and embed it firmly within a structure of value to which it declared itself implacably opposed. So I was prepared to rail against it, or say that the tribute was, obviously and ironically enough, a decisive demonstration that Arte Povera failed, and perhaps that all radical art is destined to fail, in that it’ll either disappear or be swept up into the institutions and interpretive structures it tries to destroy. But I'm afraid that my experience in the actual space ended up contradicting the attack I envisioned. I think these works, which are now sculptures in a white cube, are powerful or hilarious in that space.

Despite the best efforts of the artists, pieces such as Marisa Merz's modest-seeming but suddenly beautiful “Fontana,” radiate a different kind of charisma than they might have had in their original context. (Typically, the wall text quietly informs us that the object was not actually in the Amalfi event, but that it might be similar to something that was.) Shown this way in this place, Arte Povera seems central to the project of telling the art history of its period and after. Mario Merz's untitled installation, consisting of hay bales with a neon tube jammed into them at an angle, seems in this context central to the story of contemporary art told throughout the contemporary wing of the museum, to Judd, Flavin, Lewitt, Acconci. And, like the best of those artists, it suddenly struck me as beautiful and funny.

Perhaps the Povera artists weren't as opposed to art as they thought. It's harder for art students to get rid of the concept of art than they might think, as they’re continually saturated by it. Trying to destroy it is also a way to lay claim to it, or to take up an important place in its history. Perhaps, secretly, they were still making things that they found pleasing or profound and thought other people might too. The contradiction that’s embodied in the new show, in other words, was in the artists themselves, emerging self-consciously within the history of art at their moment, operating within it in spite of or because of their heroic attempts to shake it off. Their rejection of art was intended to be art all the time. The Philadelphia show turns the objects and the artists against themselves, but also reveals what they actually always were.

—Arte Povera: Homage to Amalfi '68 is on view at the Philadelphia Museum of Art through July 7.