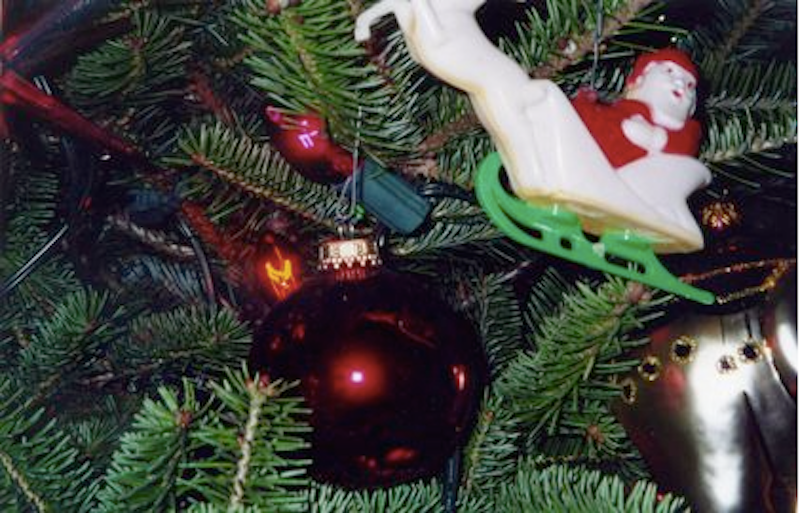 Frankly, I hope several mice stir in the house tomorrow night. I like the critters, even name them, on the rare occasion they burrow through a crevice in our crevice-aplenty household in old Baltimore. Although like most people I believe the holiday season is too long—really, the days between Dec. 26th and Jan. 4th or so crawl by—there remains, since I was a kid, the serene 36 hours of Christmas Eve and then the main event. Time, for those of us who are fortunate, is temporarily suspended, and the highlight for me is surveying the tree near midnight on the 24th, and I look back at the foggy images of time.

As the youngest of five boys, living in a—honesty prevails—ramshackle but remarkable tract house on Long Island, every Christmas morning, after the gifts were opened and cooed over (Mom was especially extravagant with the compliments when inspecting what her sons bought or made for her), Dad would take to the kitchen—his car wash closed for the day—and make a big pancakes, eggs and bacon breakfast. Didn’t matter that just a few hours later the big turkey would appear on the table, ready for carving—one of two times a year the “good” china and crystal glasses were used—and the seven of us would yap and yap and yap, and I’d be fibbing if I can recall even one cross word exchanged. I hit the jackpot in 1965—though I must say my parents did up Christmas in Old Fezziwig way, sometimes beyond their means—when I discovered under our full $6 tree (as the family’s baby, I had dibs on that prized location), a new sled and a Spalding’s mitt. And I think it was two years previously, that Mom was in a passing snit when one of big boy’s girlfriend gave him a carton of cigarettes for Christmas; for some reason funny bones were tickled over that one.

On Christmas Eve in 1970, a group of friends and I embarked on an impossibly Norman Rockwell activity, traversing the streets of neighboring Halesite, knocking on doors and singing carols. Truth be told, it was a chance to get out of the house, flirt, smoke a few bowls and spread our teenage cheer. Yet when we sang favorites like “Hark the Herald Angels Sing,” “The First Noel” and “God Rest Ye Merry Gentlemen,” I felt a lump in my throat, especially when the recipients of the short concert opened their houses and offered hot chocolate and snowman cookies. I couldn’t sing worth a lick—my friends Elena, Ruthe, Hazel and Rich were the stars—but it’s a tender memory, maybe like one of those the young Ebenezer Scrooge experienced.

The years passed, and there were raucous Christmas parties throughout the season. One year, I believe it was 1984, my City Paper colleague Phyllis Orrick and I made the rounds, maybe five soirees in the space of 10 days. At the home of Baltimore’s Evening Sun legend James Bready and his wife Mary, at one point, our friend Mike Bowler, also at The Evening Sun, cracked up those around him, saying, while juggling a plate of food and glass of wine, “Love seeing everyone, but by now we’re all wearing the same ties as two days ago!” Now, that party was sedate and dignified compared to the holiday gatherings at both CP and later New York Press, where politicians, journalists, actors, artists and musicians crowded together, drank like crazy, exchanged zany gifts and added ornaments to the Christmas trees that today might get them busted for objectification, hate speech or just jolliness. It would’ve been an Oberlin moment. It was slightly embarrassing in ’86, when former Orioles ace came out of the bathroom and remarked, eyes rolling, on the spent syringes on the floor.

Into the 1990s, my wife Melissa and I hosted a Christmas Eve party every year: originally, it was for Jewish friends who weren’t preparing for the following day, but it grew into something larger, with a bartender and caterer, and our two sons Nicky and Booker running around like nuts, hopping on guests, eating too many sweets and, when taking a break, marveling at the tree, under which there were scads of presents. In 1991, after most of the guests had gone home—many to assemble, however awkwardly, toys for their own children—my longtime friend Howie Nadjari and I had the living room for our own, and we caught up on old times. I told Howie that the next morning I was going to ask Melissa for her hand in marriage; he clapped me on the back, said I was one lucky fellow, and the next time I saw him was at our wedding in May.

One last thought: the picture above, detailing a World War II era plastic Santa, could’ve been taken in any year of the past generation. That’s another part of Christmas: it’s at the same time permanent and yet always moving forward.