Don’t Vote: It Encourages Them

I wouldn’t buy a used memory from a politician. 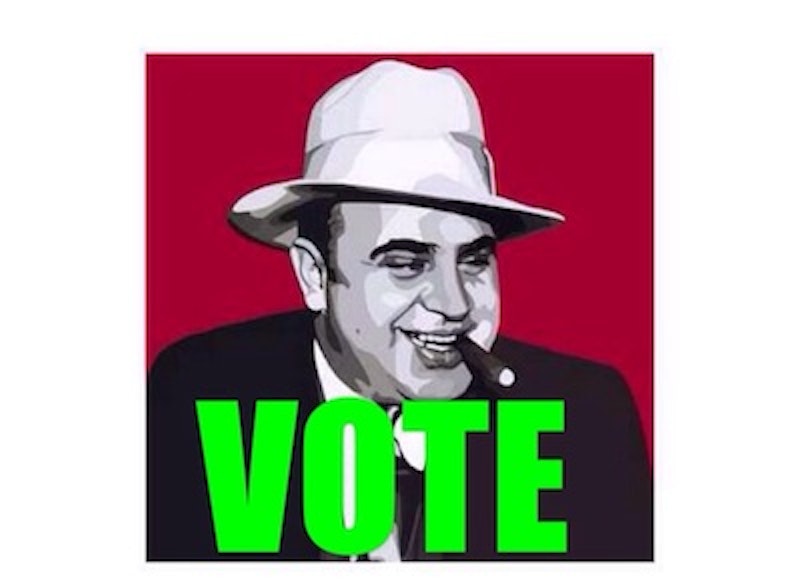 Why are we flooded every four years with imbeciles and crooks in office running the government? Where’s our solidarity? It’s not like people don’t vote, performing their civic duty as well-intentioned and obedient Americans. What? Not enough good people vote? I don’t believe your vote ever counts, but you’ll still participate. It’s the greatest scam perpetrated on a country and its people since communism, yet another failed system based on power, corruption, and deceit. The only thing voting accomplishes is jury duty every year and duping people that they’re contributing to some semblance of democracy.

You can slap all the flag decals and bumper stickers you want on your cars and prop up a plastic Jesus on the dashboard next to the wobbly dancing hula girl and the bobble-headed sports figure. We truly care about the environment, the homeless and the poor. We’re hot under the collar over global warming. We need to save the endangered species. Save the children. Styrofoam and plastic stuff bugs us.

Government-sanctioned genocide is a little closer to home. Just another useless exercise in futility. Your vote counts for nothing except the deception of believing that you matter. Sorry to break the news. Elected officials never gave a rat’s ass about anyone but themselves, their self-serving oligarchy and lobbyist constituency of greedy corporate blood-sucking shills. You were never in the equation. We are not a priority. Dollar signs and stock market numbers.

Way too often we witness powerful privileged assholes at their worst behavior. Having our noses rubbed in the rug, like puppies who shit on the carpet. The problem is we didn't create the mess. We're potty-trained like civilized pets and well-informed people yet some among us will never learn. The rich have always shit on the poor. They try to dress it up in a Sunday church meeting with charity and mock compassion for the less fortunate.

We watch barely-functioning spoiled white trash aristocrats run the supposedly greatest nation of the world into the dirt. I watch their daily machinations. I feel like a creature from another planet observing this strange species called politicians. These excuses for humane leaders make us look lame and guilty by association. I wouldn’t buy a used memory from them. There are individuals who still believe they participate in a democracy by voting these sawdust heads into positions of authority. A ruling class of hit men mocking our freedom of choice. What choice? Paper or plastic, pickles or onions, burial or cremation? And the really hard decisions we must ponder, "Do you want fries and a slice of life on the side with that?"

We've seen these alleged noble statesmen our entire lives lying and getting away with murder, aided by a compliant media. While going to the crapper all over our beady little heads. Some of the greatest hits ever made by these demagogue cartoon dummies you might recall are, "I am not a crook." "I did not have sex with that woman." "No new taxes." “No child left behind.” My all- time favorites, "They have weapons of mass destruction" and "We will not go to war." The list goes on but you get it. We love it.

We're buried alive under steaming piles of shit. Not only do we fall for it but we also forgive them. They're all too human to be real. The whopper tales they propagate would make Satan blush.

At least old school mobsters had dignity and respect. The mafia had a sense of honor and family when they were chopping you up in a basement. They don’t kill civilians, woman or children, if they can help it. They never whack anybody who didn’t deserve it. Politicians, on the other hand, have no qualms about dropping bombs on innocent people. Wiseguys have a code of ethics. Organized crime controls everything including those “elected” officials, judges, and the police they own. And we listen to the President talk like a poor excuse for a gangster. A two-bit tough guy. All mobbed up. Mouthpiece for the highest bidder. Like he’s one of us. The goofy Godfather, Don Trumpleone.