Which way should we go? 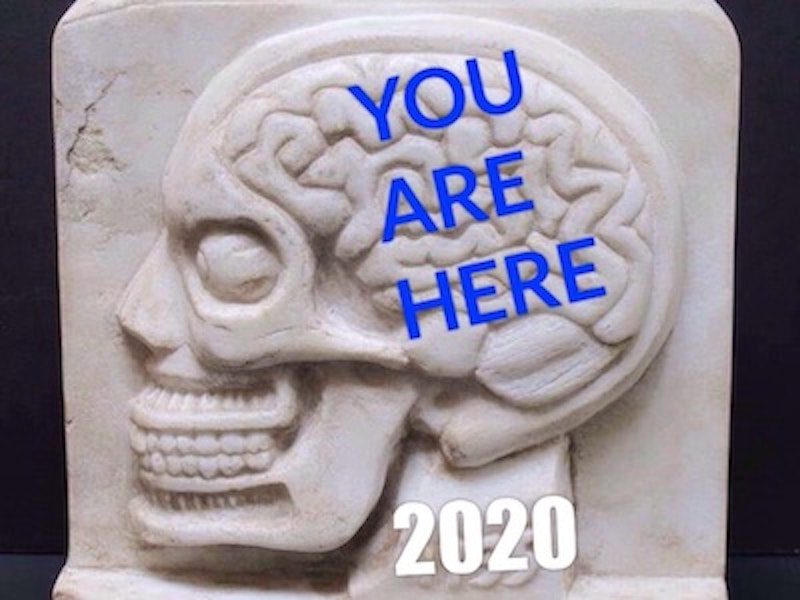 Here I am. Still knocking around by the grace of some unfeeling gods or whatever it is that makes it real. I'm self-centered, indulgent and even a bittersweet sentimental fool most of the time. The old guy who lived long enough to forget more than remembered, I get lost in my head. I go someplace else. It's all about me, doing stuff that originates in my brain. It's where the magic happens. It begins with a single thought. There’s nothing in there but ideas, random thoughts and half-assed theories on what’s tangible or considered real. Believed to be events that pass the days.

Sawdust, gray goo and the spark of a vivid imagination. The space between your ears is a time bomb with detonator eyes that see far and wide. There’s too much going on inside that noggin. There’s nothing I can do to stop it. Life flashes before me like an old TV rerun. Everything that should be done and finished winds up not accomplishing anything. Why and how did I get here? Which way should we go? These and other questions go unanswered. Practicing the fine art of Nothing.

Meanwhile wildfires around the planet burn. There’s another mass shooting somewhere else. Dancing With The Stars and flash floods. Too many gods offering up wholesale religions at half-price. Another lonely person commits suicide. The Space Force Army. Plastic floating in the sea. The Great Barrier Reef is not so great. Honey bees and flash floods. Artificial flowers and tin foil hats and Round Up weed killer. Chem trails and fluoridated water. Lead pipes, lead paint and asbestos. Radioactive waves glow in the dark. Hurricanes and ball games. Building walls and kicking down doors. Smash the windows. Lightning strikes as a tornado swirls round and round.

Everybody's watching something. They don’t see eye-to-eye. Going through the motions. Doing something all the time, saying something I no longer hear. UFO sightings, plagues, viruses and pandemics. Impossible hamburgers and extreme climate change. Cancer has a million ways to go. Holy hatred waving the flag nailed to a cross. The facts are fictitious characters in the story. The tripe and trope of cultured violence. Life as we know it wiped out of existence.

Pride is envy overdone, civility is an afterthought gone sour. The truth’s always open to interpretation. Good Christians preaching hatred. Like a crispy deep-fried dream. Leaving a transparent grease spot. Where what one goes through is unimportant. It’s a slippery slope of fibs and half-truths. Nothing anybody says or does has any consequences or repercussions. Bad karma, guilt and sympathy leave no greasy residue.

How we arrived at this point is unclear. The truth is ridiculous. The level of madness wreaked upon an individual on any given day is enough to drive anyone bonkers. The sheer madness of events that start like raindrops on a window. First a few, here and there. Then a steady deluge downpour of mayhem and chaos. To think you're normal is a tall order, much less believing reality's normal too. It's a necessary delusion. Fooling each other into accepting lunacy for truth and evil for holiness.

I can no longer stand the gnawing possibility that we’re all doomed. Trying to make sense out of all this mess. It’s a waste of time and effort. The new norm is living in fear anywhere you go outside in public. Question and doubt everything you see, hear and do. The senseless idiotic boredom of stupid days that pass like stinking farts on an elevator full of the unsuspecting public. We flock in the herd mentality of slaughter and sacrifice. The stench of stupidity that wreaks dumb death reanimated, it lives and walks among us. This division that splits us down the middle. Taking sides of who’s right or wrong. The sum total of a zero minus countdown. Blasting off into oblivion. Wondering how I got here in the first place.

All systems are scheduled for maintenance but it’s beyond repair. Like the great civilizations that fell before we came around. How did they arrive at such an untimely decline? We create heaven, hell and other places to hang out. Relying on some invented collective past, dreamt by feeble brains. Making us top dogs in the food chain. Devouring each other like a holiday dinner. The very things we believe are necessary ingredients for survival in a make-believe pursuit of the imperfect world. Held together with flimsy dreams and the nightmares they create.