The Aged of Times Square

The neon billboards are slapped on buildings that in some cases were built in the 19th Century. 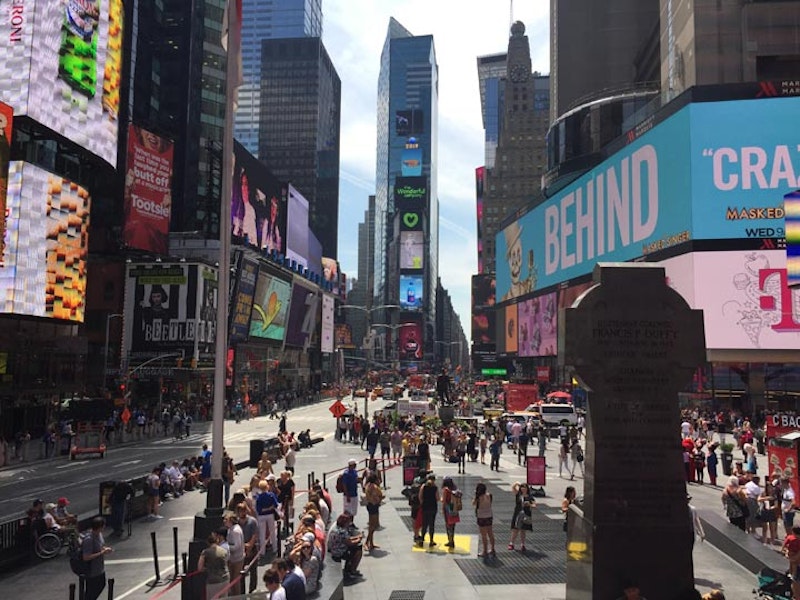 Broadway crosses 5th, 6th, 7th and 8th Aves. south of Central Park, but the crossing with 7th Ave. is so gradual that there’s about a four-block stretch when the avenues merge and become one wide road. This is Times Square, a place where I rarely venture—in my youth because of its crime-ridden nature (I was missing out, as there were legit movie houses here playing stuff you couldn’t find elsewhere) and since the Giuliani Era, because of its franchise-domination.

I popped down to Times Square recently, looking for old things. Above, I’m standing on the Red Steps at Duffy Square, looking south toward the Times Tower, officially One Times Square, which is unrecognizable from its initial appearance. Constructed in 1905 as The New York Times office, it’s famed for being the locale of the New Year’s Eve ball drop and beginning in 1928, the site for the “zipper” news updates. The Times lasted here for eight years and moved to W. 43rd St. in 1913, and to a new skyscraper on 8th Ave. in 2007.

Originally, it was an Italianate 25-story tower, the second-tallest building in Manhattan, visible for miles. The transformation to its current use as a gigantic billboard began in 1963 when Allied Chemical purchased the tower and stripped off most of the exterior, replacing it with flat marble. The top floor survived as a restaurant till the 1980s. Its news “zipper” was in place as early as the 1920s. 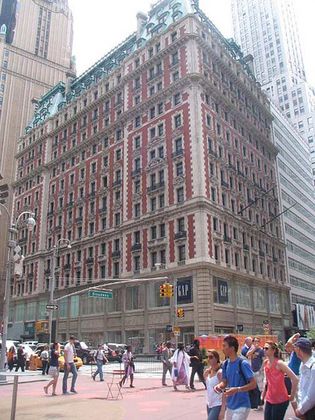 The Knickerbocker Hotel, 6 Times Square at the SE corner of 7th Ave. and W. 42nd, went up in 1906, a year after One Times Square. Unlike the Tower, it looks remarkably as it did in its heyday as one of NYC’s premier hotels. It was constructed by John Jacob Astor IV as a symbol of New York City’s prosperity during an economic boom, but closed its doors as a hotel just 15 years later. It later served as the headquarters of Newsweek and for garment showrooms and offices, but has since been renovated as a hotel again. Opera star Enrico Caruso was a longtime resident, and legend has it that the martini was invented here in 1912.

When the IRT subway was first built in 1904, a door from the platform led directly into the hotel. The door remains there, marked “Knickerbocker” though it has long since been blocked up. 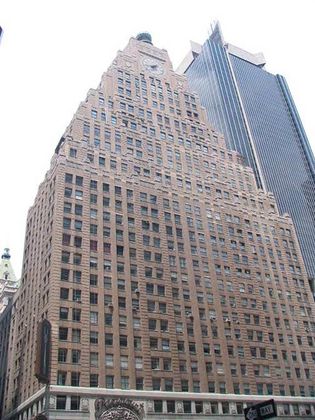 The Paramount Theatre, 1501 Broadway at W. 43rd, was built as the Broadway offices of Paramount Pictures in 1926, and its longtime theater was the studio showcase for many years, with a giant Wurlitzer organ. It’s said that the movie studio’s mountain symbol is represented by the stepped roof, crowned by a gigantic clock and globe. Big band music, and later early rock ‘n’ roll, was presented in the huge theater. The Hard Rock Cafe, preceded by World Wrestling Entertainment, has dominated the ground floor for several years. The Wurlitzer is now in Wichita, Kansas. 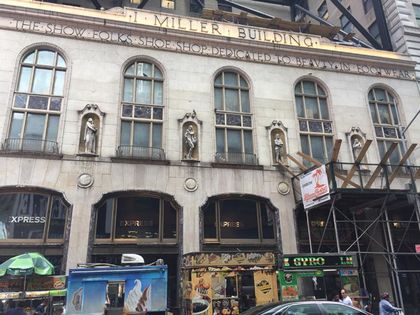 The I. Miller Building, at 7th Ave. and 46th St., was built from 1927-1929 and is nearly unrecognizable underneath the video billboards and garish scaffolding advertising a chain restaurant. Israel Miller’s shoe store was long patronized by theater people.

But a closer view of the I. Miller Building along 46th St. will prove to be a glimpse into the Great White Way’s past. In 1927 the I. Miller Company took a public vote to determine the most popular theater actresses of the day with the idea of placing their statues on their new 7th Ave. store. The results came in and sculptor Alexander Stirling Calder was chosen to depict them in some of their most famous roles… Ethel Barrymore as Hamlet’s Ophelia, singer-dancer Marilyn Miller as Sunny, Mary Pickford as Little Lord Fauntleroy, and soprano Rosa Ponselle as Bellini’s Norma. 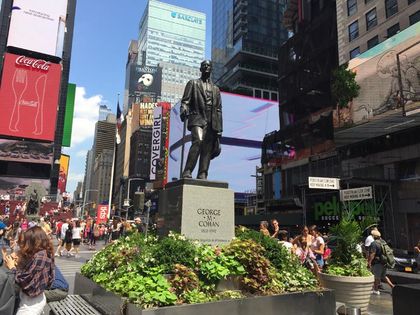 Entertainer, playwright, composer, lyricist, actor, singer, dancer, and producer George M. Cohan (1878-1942) once needed no introduction to most New Yorkers, who remember James Cagney’s portrayal of him on film, as well as the song…

Cohan also wrote “Yankee Doodle Dandy” (even though he was born on the third of July, not the fourth), “Over There,” made his mark as an actor in Ah, Wilderness and played FDR in I’d Rather Be Right. Little Johnny Jones, Cohan’s first big hit musical from 1903, was revived with Donny Osmond in the title role in 1982. It was one of Donny’s biggest career flops, closing after just one performance.

Georg John Lober’s memorial was installed in Times Square at 46th St. in 1958. 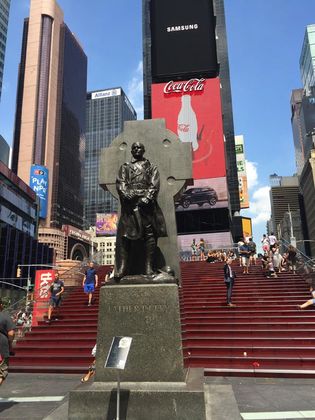 Father Francis Duffy (1871-1932) of Most Holy Trinity Church on 42nd St. near Broadway served with the Fighting 69th, a mostly-Irish regiment in World War I, was severely wounded, and received the Distinguished Service Cross for bravery on the battlefield. Sculptor Charles Keck’s monument in Duffy Square was dedicated in 1937 at the triangle formed by Broadway, 7th Ave. and 47th St., and features Father Duffy in his World War I uniform standing in front of the Celtic cross. It was at this spot that Tony Curtis’ Sidney Falco, the unscrupulous press flack in Sweet Smell of Success, got his final comeuppance.