Revisiting Dyker Heights and its history 30 years after living there. 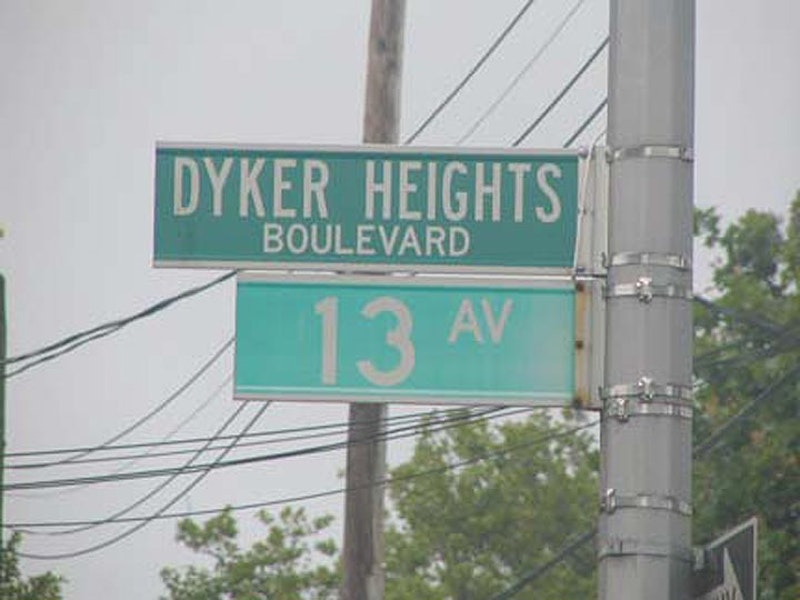 I lived in Dyker Heights, Brooklyn, for about a year, 1990-1991, but always felt detached from it. It’s a land of two-family houses, sprinkled with an occasional apartment building, and some blocks have those gorgeous attached brownstones you find more frequently in Bay Ridge, Sunset Park or Park Slope. I rented the bottom floor of a two-family house in 1990 for $700 a month and at the time, that was a bit expensive.

Dyker Heights was first settled by, most likely, a Dutch family named Van Dyke in the 1660s and it remained farmland into the early-1900s. Because of its position on a hill overlooking the Narrows there were several fancy mansions built mostly along 11th Ave. from 1880-1910, but some along the other avenues.

I was fairly miserable in Dyker Heights. My mood from month to month sometimes depends on my financial situation and at the time, the apartment was beyond my means, so I was losing money. In a happier situation it would’ve been a marvelous place, but with six rooms and no one but me there, I felt sort of like Charles Foster Kane at Xanadu after he’d driven his wife away. And, subways don’t serve Dyker Heights, really; I had to walk about 12 blocks to the nearest station at Ft. Hamilton Parkway and 62nd St.. In the rain, that’s unpleasant. Then there was the obligatory break-in burglary since I was on the first floor. So, I left Dyker Heights after a year.

Why did 13th Ave. become the main drag of Dyker Heights? After all, many skyscrapers actually skip the 13th floor. (NYC hasn’t shied away from the #13 in any of its numbered street sections.) The trolley line that predated the #1 bus route ran along 13th between Bay Ridge Avenue and 86th St., and early on, the Brooklyn, Bath Beach and West End Railroad constructed a station at 13th Ave. and 55th St. The avenue does sit at the bottom of Dyker Heights’ heights and is lower than 10th, 11th and 12th Aves. In any case, I’ve never run into any bad luck there. 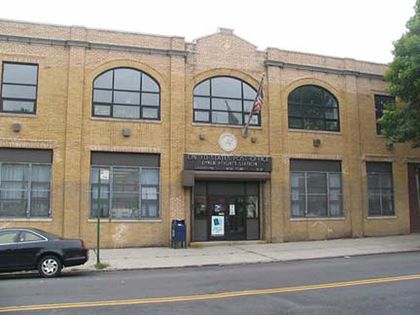 13th Ave. begins at a massive Knights of Columbus hall on 86th St. on a site originally owned by the former Dyker Heights Country Club, which ran the Dyker Heights Golf Course. Dyker Heights has the greatest feel of a small town between the golf course and about 81st St. My father preferred used this post office at 13th and 83rd, preferring it to the nearer one to where we lived at 4th and 87th. Perhaps he liked this more stylish building, or maybe the lines were just shorter. 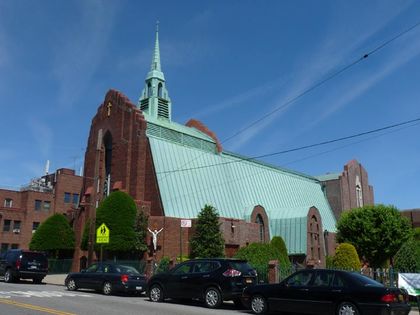 Dyker Heights has a national shrine, the Church of St. Bernadette on 13th and 83rd St. The parish originated only in 1935–relatively recently, since the area wasn’t built-up on every block until then–and the building was constructed in 1937 by architect Henry Murphy. Closer to 82nd St. you find what the AIA Guide to New York puckishly calls a “kitsch rock-piled shrine” to the titular saint, St. Bernadette Soubirous (1844-1879) who, according to Catholic tradition, spoke to Jesus’ mother, the Virgin Mary, 17 (or 18 according to the version you read) times in a grotto near her home in Lourdes, France. Bernadette uncovered a spring of running water at Mary’s direction and since then, the spring has gained worldwide renown for its healing power. Mary is rendered in stone and terra cotta above church doors. 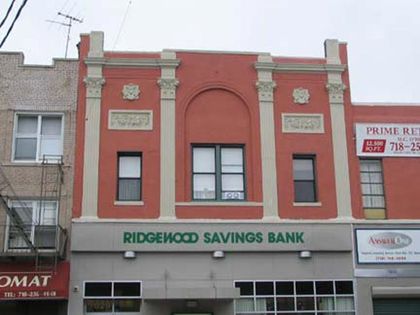 At 7010 we find a Ridgewood Savings Bank branch with four pilasters (attached columns) and a pair of friezes depicting frolicking minstrels. This had to be a theater at one time; what bank building would include a frieze of pan-pipe and tambourine playing fauns?

According to the nonpareil cinematreasures.org: “Situated in the Dyker Heights section of Brooklyn, the theatre was the flagship of the Endicott Circuit, which also had its headquarters in the building. In “the old days”, the circuit was never more than minor-league, running only late-run houses in Brooklyn and Queens/Long Island. In 1945, besides the Endicott, they included the Avon, Garfield, Hollywood, Metro, 16th Street, and Sun Theatres, all in Brooklyn; the Boardwalk in Arverne, the Edgemere in Edgemere, Far Rockaway, and the New and Rivoli in Rockaway Beach.” 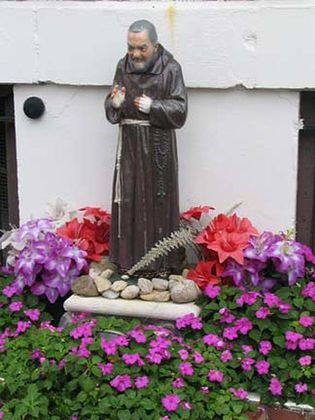 St. Bernadette’s is only the largest shrine in the neighborhood; Dyker Heights, a heavily Italian Catholic neighborhood, has dozens in houses’ front yards, most of them dedicated to Mary. This one near 67th St. features Francesco Forgione (1887-1968) of Pietrelcina, Italy, who was better known as Padre Pio (“pious Father”) after his ordination to the priesthood in 1910. He served in the Italian medical corps in World War I and much later, in 1956, opened what is regarded as the most efficient hospital in Europe, the Casa Sollievo della Sofferenza, or “Home for Relief of the Suffering.”

It’s his mystical aspects, however, for which Padre Pio is best known: he was a renowned miracle worker and reputedly carried stigmata, or bleeding in locations corresponding to the crucifixion wounds of Jesus Christ, from 1918 till the end of his life, and believers maintain he could bilocate, or be in two places at the same time. He was canonized in 2002. 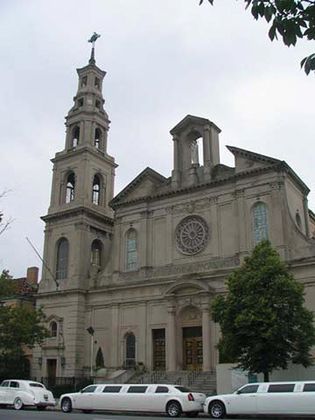 On 65th St. between 12th and 13th is the Italian Renaissance Regina Pacis (Queen of Peace) Church, likely the tallest structure in the Bay Ridge-Dyker Heights-Bensonhurst area except for an apartment complex on 65th St. between 3rd and 4th Aves. When I was bicycling around Brooklyn, I always knew I was nearing home when the spire of Regina Pacis appeared in the distance if I was coming back via Bensonhurst.

Legend has it that when several jeweled crowns at Regina Pacis were discovered missing, mob boss Joseph Profaci, who resided in the area and worshipped at the church, let it be known that the chalice was to be returned and, even though it was, it was a transgression that could not go unpunished and the thief was later strangled. 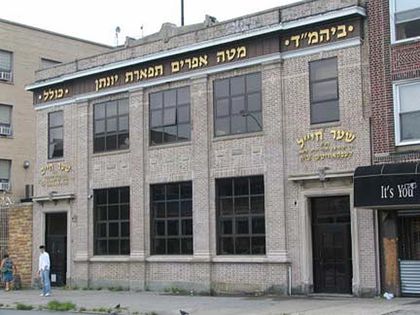 At 60th St. is the unofficial Dyker Heights-Borough Park border, but we’re specifically in a Borough Park enclave called Blythebourne (derived from dialectical Scottish for “happy home”) that sits along 13th and New Utrecht Aves. for the few blocks above and below 55th St. It was developed along the old Brooklyn, Bath Beach and West End Railroad line in the 1880s by Electus Litchfield, son of Edwin (who built the Gowanus Canal and Litchfield Villa in Prospect Park in the 1850s when he owned much of what became Park Slope). If you squint, you may be able to make out the remnants of old Blythebourne, which was assimilated into Borough Park decades ago. State Senator William Reynolds, owner of the old Brooklyn, Bath Beach and West End Railroad, coined the term “Borough Park” when Blythebourne was expanded beyond its original parameters.

More than anything else, Borough Park benefited from the conversion of the Brooklyn, Bath Beach and West End Railroad to a Brooklyn Rapid Transit el in 1916, with service connecting to Manhattan trains that cost just a nickel. The old farm lots were bought up, a street grid was laid out, and the streets began to bulge with fancy dwellings in the Queen Anne style and later, multifamily apartment buildings that all had uniformed doormen.

The subway’s Flushing Line (the #7 train) is celebrated as the “International Express” for the cacophony of cultures to be found underneath, but just about any subway line can be an “international express.” On 13th Ave. in old Blythebourne, around 56th St. there are store signs in Hungarian, Polish and Yiddish.

The building with the Hebrew-style writing is the old Blythebourne post office, now a school; the new PO is Brutalist building constructed in the 1970s  a few blocks away.