Youth and the Future at World Juniors

The tournament’s a ceremony of renewal, one that rings true for a winter country. 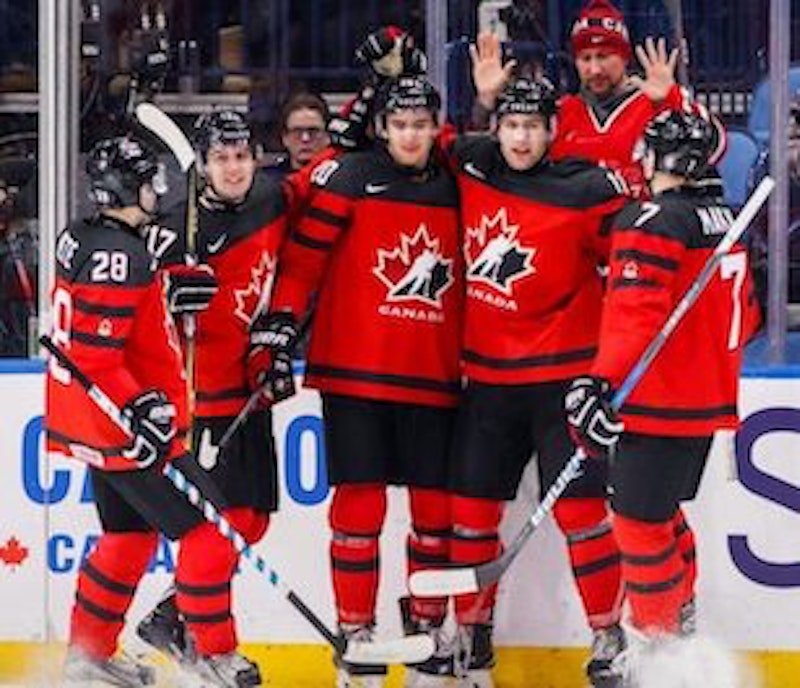 On the Wednesday evening before Christmas I helped my parents decorate their Christmas tree. While I did, the TV played the first period of the first pre-tournament game of the 2019 World Junior Hockey Championship. And the conjunction of the game and the tree was only fitting, because the World Juniors have become just as much a tradition of the Canadian holiday season.

The format of the tournament’s varied over the years, but the idea’s simple enough: the top 10 hockey countries in the world send national teams of their top junior-aged players for a competition starting on or around Boxing Day and running to about the end of the first week of January. Although unofficial tournaments for hockey players under 20 started in 1974, the first official tournament was in 1977. TSN, Canada’s first all-sports TV network, began airing the tournament in 1991. Over the past 27 years they’ve developed the World Juniors into a national phenomenon.

Ratings for the tournament have fluctuated depending on how well Canada does, but typically if Team Canada’s playing for gold the final will pull similar ratings in Canada to the Super Bowl or the Oscars. A typical game for Team Canada during the tournament will draw an audience of a million people (in a country of about 35 million). Over 11 million people watched at least some of the gold medal game of the year before last; just over 17 million watched at least a part of the tournament. In 2015, it was over half the country.

I don’t remember when I started regularly tuning in to the World Juniors. There was a run of five straight tournament wins for Canada during the 1990s. I distinctly recall watching the first game of the 1998 tournament (on Christmas Day of 1997), when Canada lost to Finland on their way to an eighth place finish. It’s an odd fact of sports that defeats are sometimes more memorable than victories.

Why did so many Canadians start watching it, and why do I keep tuning in year after year? Some of it’s the consistently high quality of TSN’s broadcast. Some of it’s the thrill of watching exciting high-stakes sports events, and occasionally coming away with indelible memories of victory or defeat. But those are things you can get a number of places. The men’s Hockey World Championship are held every spring, and few people care. Why the difference?

Start with the obvious: the World Juniors present highly-skilled hockey driven by the enthusiasm of athletes playing for their country. The tournament doesn’t have the precision of an NHL game, and the players are on average a bit slower and smaller, but hockey’s sometimes more entertaining when it’s not technically perfect. It’s a sport driven by mistakes; chances come off of blown coverage and misreads. The World Juniors have more chaos to them than the pros, and maybe more fun as a result.

Part of it may be that the World Juniors are much closer to a true best-on-best international tournament. The World Championship takes place in spring when the Stanley Cup playoffs are on, so those national teams are made up of NHLers who missed the playoffs or got knocked out in the first round—which makes for some random groups. It’s true that some of the best 18- and 19-year-olds don’t make it to the World Juniors because they’re playing in the NHL. Still, most of the best players of that age range go to the tournament.

Partly it’s also that there isn’t much else going on over Christmas and New Year’s. The tournament matches the traditional Twelve Days of Christmas (which end on January 5 or 6, depending on how you count them) almost exactly. But then there are also distractions at the same time of year—things like family and friends. And the Spengler Cup, pitting top European club teams against each other and against an all-star team of Canadians who play in Europe, runs from Christmas to New Year’s but draws a fraction of the interest.

Unlike the Spengler Cup, though, the World Juniors features some of the best prospects in the game. That means NHL fans can get a preview of their team’s future. It also means they can watch potential high picks in the next year’s draft—maybe even in the draft after that, as any given year will see an elite 16-year-old or two make a national team’s roster. Draft stocks for individual players are greatly affected by the tournament; maybe too much so since it’s a relatively small sample size of games.

The point is that the World Juniors are tied, however subliminally, to youth and the future. The solstice passes, the year turns, and another group of kids hit the ice with dreams of gold and NHL careers. The tournament’s a ceremony of renewal, one that rings true for a winter country.

Because the players are young there’s an emotion to them you don’t see as much in the NHL, even in the playoffs. There’s no weariness to them, only the thrill of the game. Many have been polished by agents into quote-making machines. But you can see the excitement in their play and hear it in their voices. These players grew up watching the World Juniors every year. Now they’re a part of the pageantry and the drama.

And for Canadians there’s real drama to the tournament. Every year Canada ices a good team, often a great one, but other hockey powers do the same. Team Canada won gold last year, silver the year before that, and didn’t medal the year before that. The tournament hits the sweet spot of giving Canadian fans a team to cheer for that will have a real chance but can’t sleepwalk their way to a win.

And for fans outside of Canada? TSN broadcasts every game, and provides those feeds to international broadcasters. The tournament’s become more popular around the world, not just in Canada. Interest is growing in the United States. Americans are used to cheering for college-age players in football and basketball; will the World Juniors open the door to an interest in college hockey?

There are worse things to do over the holiday season.