The End of an Era

A storied college football rivalry comes to a close. 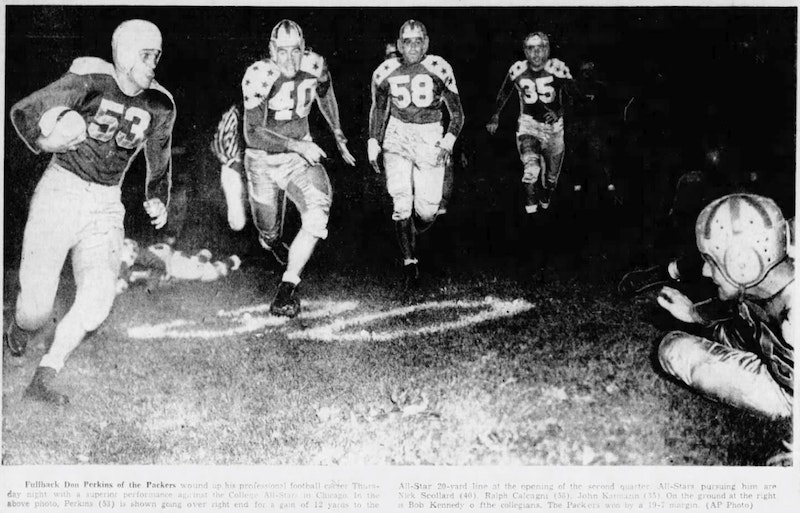 COLLEGE TOWN, USA (UPI)—The 109th and final installment in the storied "Titletown Throwdown" series between College University and University State was played today, with State winning a 29-25 thriller after its defense held firm on a goal-line stand against CU’s high-powered wishbone offense.

"If you're going to go out, why not go out on top? Our boys gave University State everything they had, but they couldn't score enough points—at least not as many as State did, anyway," said longtime College University coach "Herc" Broadsides, who’s rumored to be retiring at the conclusion of the season.

The game, which featured the stunning reversals of fortune and dramatic trick plays that’ve characterized the "Titletown Throwdown" since its inception, is sure to leave a lasting impression in the minds of the 65,000 fans who attended the game.

"What whiny bitches those CU cocksuckers are," said one particularly voluble University State fan. "We waxed their motherfucking asses, and now those little babies want some titty milk. Well, they can just drop down to their knees, unzip my pants, and blow me."

"All of them?" I asked, incredulous. "Like at once, or seriatim?"

"Even if they were all sucking at once, they couldn't fit my big momma dick in their mouths. I have a huge University State momma dick, and they have these little College University pea-sized daddy mouths that couldn't suck an egg through a pixie stick. The Bronze Sausage Grinder is coming back to its rightful owners! You feel me, brahski?"

I wasn't sure what any of that meant, but it was obvious that this person—remnants of tomato sauce from a $5 pizza forming a saint's nimbus around his lips and clad from head-to-foot in University State apparel, including a filthy, battered hoodie and a ball cap with an unbent brim—seriously cared about a meaningless rivalry game, the existence of which 99.9 percent of the country's population was unaware. "I think I feel you," I replied.

"What I'm saying is that these CU losers are a big bunch of jerkwad, pole-slurping hillbilly ketamine addicts and I and my University State brothers are the godlike heroes of all my fantasies," he continued. "CU just can't handle the fact that it's lost close to 100 percent of these games, whereas we've won well over 60 percent. But that's because nobody at CU leaves that dingleberry of a school able to do simple arithmetic, let alone understand the greatness that is the University State experience."

Before I left the campus, I stopped a College University student and asked him for his thoughts about the game.

"Oh, that was some sorry bullshit," he said. "All of our players are horseshit drugged-up streetball motherfuckers. They spend their time at the bars snorting Xanax and getting loaded on 151 and rum shooters instead of lifting weights, taking steroids, and other manly football shit like that."

"Do you think you could have done a better job?"

He nodded. "Hells yeah. You should peep what I'm doing in Madden right now, dawg. It's sick. My numbers are sick. You wouldn't believe it if you saw it."

What remains unclear is how these self-proclaimed "sports nuts" living within a 100-mile radius of College Town City will choose to spend the time that they’d previously devoted to thinking about this rivalry.

"Shit, I don't know," said the College University student. "I heard that one show The Crown is pretty good. I might watch a few eps. Maybe they're all on Netflix."