A high school girls’ basketball team got destroyed 100-0, and now they get to look like heroes. 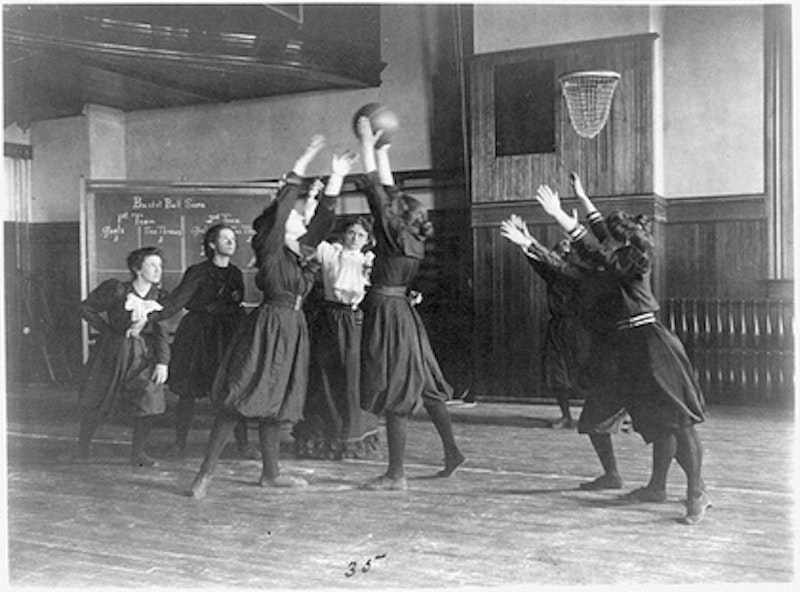 As a kid, I played on a soccer team called The Sidekicks. It was an all boys team; I was the only girl. Every year we would play in The Labor Day Classic, a weekend-long soccer tournament that was held on acres and acres of converted polo fields near San Antonio. It was always a miserable experience: boiling hot from the South Texas sun beating down on the vast, dry, treeless landscape. Or, oddly enough, it would be freezing. The wind would whip and rush across the flat terrain, kicking the ground up in a swirling mass of dust and sharp, pointed grass blades. By the end of the day, our skin was chapped and sore, freckled with welts from the barrage of windblown particles. Worst of all, we were terrible. If it hadn’t been for the free t-shirts for all participants, if not for the split oranges at half time and the powdered donuts and juice boxes at the end of the games, it wouldn’t have been worth it.

I remember one year when we had to play a team that drove up from Mexico. They had only one girl too, and she was better than me. She was taller and faster. Her passes were more accurate. Her crosses curved beautifully into the feet of her waiting teammates. “You’ll cover the girl,” my coach told me, but cover her I did not. She flew past me, knocked me over and stole the ball time and time again. It wasn’t just me that looked like a foolish monkey, though. All across the field we poor, pathetic Sidekicks were eating dirt, left in the dust. We chased them around in vain. They’d shoot the ball one direction and our goalie would dive the other way. We were bruised and scraped and didn’t score a single goal. It felt like they scored at least a thousand.

It was incredibly embarrassing, but that’s sports. You win some, you lose some and every now and then, if your team really sucks, you end up looking like a jackass. Unless you are a member of the Dallas Academy women’s high school basketball team, in which case you somehow come out looking like a hero.

Officials from Covenant—a private Christian academy—condemned the outcome of the game for not reflecting “a Christ-like and honorable approach to competition.” Additionally, the Covenant players have apologized for the ridiculous margin of victory and are attempting to forfeit their win. Adding to the unnecessary drama was Covenant coach Micah Grimes, who issued a statement saying that he did not agree with the school’s apology, citing that Covenant “played the game as it was meant to be played.”

According to USA Today, Grimes’ statement further explained that while his team may have started off hard in a full court press, “After 3 minutes into play, we had already reached a 25-0 lead...I immediately stopped the full-court press, dropped into a 2-3 zone defense and started subbing in my 3 bench players.” Conflicting reports from opposing parents suggest that Grimes’ players remained in the full court press for the majority of the game and continued shooting three-pointers, easing up only after they had reached the 100 point mark. In his statement, however, Grimes asserts that there were only a total of four three-point baskets in the entire game. Either way, Grimes made a tactical error in talking to the press and was fired.

Meanwhile, the Dallas Academy players have become the darlings of the mass media. They appeared on Good Morning America, Mavericks owner Mark Cuban has invited the team to watch a game from his suite and they’re getting the kind of positive attention a high school sports team—particularly one that hasn’t won a single game in four years—can only dream of.

But perhaps more importantly, they’ve helped bring attention to the fact that Americans remain inept at distinguishing learning disabilities from mental retardation. The Dallas Academy is a small school that specializes in students with learning disabilities like ADD or dyslexia, a fact that has been repeatedly reported in the news like it is a substantial reason for why Covenant should have taken it easy on the Dallas Academy girls. Difficulty in acquiring basic academic skills does not by default make you bad at basketball.

It’s high school athletics; I get that. Ideally, everyone would get equal playing time and opponents would be of a more even caliber. Everybody, win or lose, would leave the court feeling good about their personal effort and the experience as a whole. Unfortunately in sports, like so many things in life, not everyone is created equal. Should Covenant have run the score up to 100? No, that definitely wasn’t in the spirit of good sportsmanship. That hardly means they should have to apologize for, much less forfeit their win, though. 10 points, 50 points, 100, 2000—when your opponent doesn’t make a single basket, it doesn’t really matter how much you win by. The damage is done.

It’s a game that never should have happened. These are two teams that have no business playing in the same league, a league that could institute some kind of mercy rule or clock adjustment to keep games from getting this out of hand. The “golden rule”—do unto others and so forth—that Covenant School has been accused of ignoring is all well and good if we’re talking about matters of kindness and social etiquette, but it can’t really apply to sports. Sure, you can back off a little and do your best to run down the clock, but its no less embarrassing to be the team that scores only because your opponent has basically stopped playing defense altogether. Coach Grimes shouldn’t have spoken out in an email to the press, but nor should a coach be fired because his team knows how to win.

I sympathize with the Dallas Academy team, I really do. I’ve been there. Losing sucks, and doing so in such a horrifically degrading and embarrassing fashion sucks even more. But aren’t we maybe coddling kids a bit too much when we actually start praising them for losing? They stuck with it and saw the game through to the end and that’s admirable. But there are teams all over the nation, in every sport and every season who get knocked down and dragged around and all out embarrassed by superior opponents. They don’t all get to go on national television because of it, though.

The Dallas Academy girls seem like perfectly nice people and their sportsmanship is certainly worthy of praise. But the honest truth here is that this story is really quite simple: The Covenant School is good at basketball. The Dallas Academy is not. Good effort. Thanks for playing. Don’t forget to grab your powdered donut and juice box on the way out.