In which our munchies-craving columnist explains why Michael Phelps should not be chastized for doing something you can get with a prescription in California. Amen. 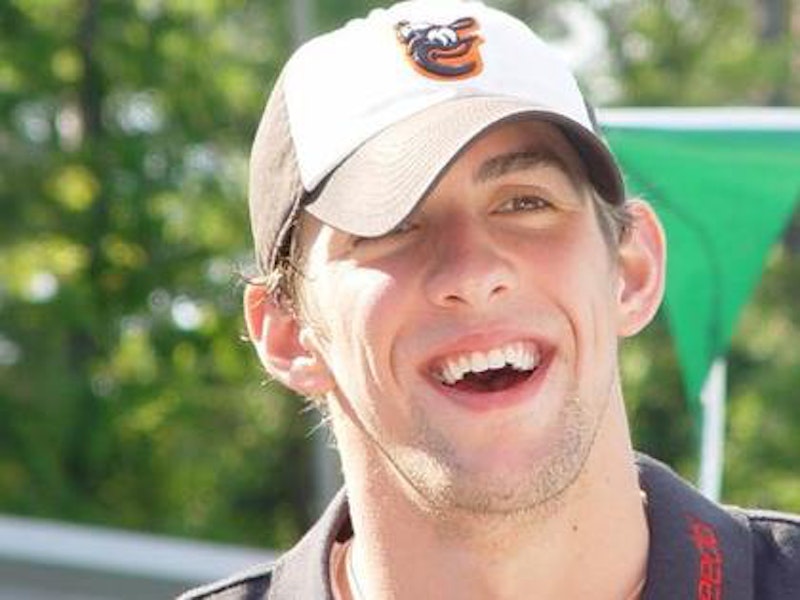 Okay, in my opinion, I believe weed should be legalized or de-criminalated or whatever, because there is all kindsa alcohol and prescription dope and cigarettes and coffee and Red Bulls and aspirin and hoodia and ex-lax® and stuff that is rightfully available for consumers to enjoy in This Great Nation of Ours. Again, on a personal note, I’ve had a lot more problems with people who were loaded on Red Bulls & vodka then I’ve ever had with individuals zooted on the “Mary Jane” as I have heard it referred to in the popular musics.

Furthermore, while I am soft on cannabis use, I totally recognize that it is mostly illegal almost everywhere in the U. S. of A. except in California, where I have seen on the teevee that you can walk into a store (maybe they even call it a “clinic”) and tell a doctor you have anxiety or some other malady, the symptoms of which could possibly be alleviated by the active ingredient in the “pot” and they will write you out a prescription for some “reefers,” “muggles,” or “grass,” as it is referred to in the common parlances of various generations of dope-smokers, and then I guess you are free to self-administer the “El Gallo” in accordance with local statutes of limitations, legal-wise.

The thing I don’t get about this blunt but effective workaround to the legal obstacles involved with getting high on some “boo boo bama”—as I have never heard anyone refer to it—is howcumzit you gotta "spark it up" to get the benefit, you know? Couldn’t you just eat a pill or a biscuit of some ground up “Assassin of Youth,”—as somebody musta called it at least once—to experience the desired effects of the “Aunt Mary?” I mean, isn’t it a Bad Idea to inhale lots of smoke?

I don’t know, man, it just seems weird to let errbody hoove on cigars and cigarettes and not let people “Fly Mexican Airlines” in the privacy of their own castle, you know? Plus, think of the crazy-ass Tax Revenue on that shit. Now look, I don't want it near schools, I don't want it sold to children. I don’t think people should be allowed to “Get a gage up” like, at the baseball stadium or in the park at the kids’ soccer game or whatever, you know? I mean, I totally believe in the theory of second-hand smoke, and the last thing I need after I go to a baseball game and drink nine beers is to get pulled over by some cop and test positive for “Green Goddess” because somebody was up in the cheap seats with me “Hitting The Hay,” as it were, right?

So anyway, I saw that bonehead Michael Phelps, the super-duper swimming guy from the Olympics, got his picture in the paper doing what appears to me to be hittin’ on a bong, or as The New York Times referred to it, “inhaling from a pipe.” Har!

This guy won a double-fistful of gold medals at the Olympics, and he’s got a shitload of endorsement deals, so it’s like, all he’s gotta do is remember how to swim four years from now and he’s gonna be like, the, I dunno, the Tiger Woods of swimming or something, and he’s too much of a dodo to realize looking like he's all “Puffing The Dragon” in public might play hob with his career and cereal-box deal. I thought that picture of him with all the medals on the Sports Illustrated made it look like he was wearing a halter top, which I don’t think was a flattering look for him. Meanwhile, he already got nailed for driving while intoxicated, so somebody needs to be in charge of him and get him a bodyguard or something to make sure he doesn’t piss away the rest of his career with any more frat-boy moves, and yeah, if he wasn’t a such big deal nobody would care. And even though he apologized for his little “Tea Party” he lost the cereal box gig, Jesus Jefferson Airplane, man, you lost the cereal box gig! For doing some shit you coulda got a prescription for in California! There are people who would let you fly on their private jet so you could go to an herb store and get a legal piece of paper so’s you could “Boot The Gong!” So look, I got zero sympathy for this guy, especially when you look at what happened to the sumo guy who got busted in Japan for “Chiefing” and lost his license to sumo or whatever. No offense, but that sumo guy didn’t look very fat, and I always thought that was key in the sumo game. I wonder if he tried telling the sumo big shots he was training with the Zig Zag Man to improve his appetite in order to slap on some sumo power?

That’s the way I woulda played it, but I don't think I'd need drugs to achieve sumo-level fatassedness, man, nobody needs to do anything to me to get me to eat some Doritos, you know? Too bad he didn’t get a prescription.