The Super Bowl As Sociology

A new book called How Football Explains America can teach us a lot about the game's enduring (and evolving) popularity. 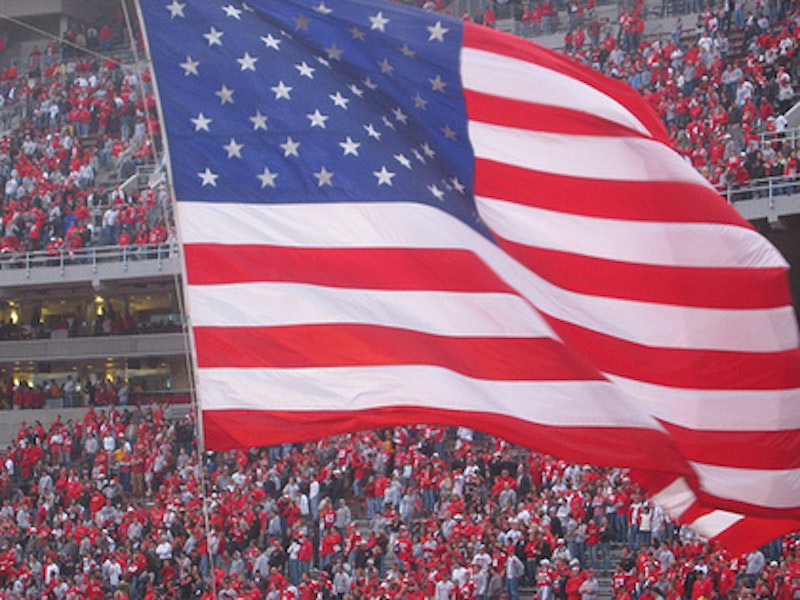 Last night about 150 million people tuned in to the Super Bowl, and 90 percent of them live in the U.S. or Canada. While this is about five times the viewership of a typical NFL weekend, it still falls woefully short of the billion global viewers the NFL happily implies watch their signature event. The billion figure—actually a measure of potential viewers—appears in the media every year, as if our totally idiosyncratic game played nowhere else in the world is so entrancing as to draw the world’s population away from sleep (the Super Bowl kicks off after midnight in Europe) and approach the ratings of the World Cup final. This is plainly absurd, and yet we seem to enjoy the fiction that our American Exceptionalism cannot be contained merely by our economic dominance or robust democracy, but must also permeate through our sports.

This is especially clear if you imagine what the Super Bowl would look like to a foreigner. They would watch 22 mostly freakishly large men attack each other in regular 15-second increments, a vicious violence arbitrarily constrained by a dense and non-intuitive set of rules. The actual game would be bracketed by pyrotechnics worthy of July 4th, dozens of scantily clad young women dancing on the sidelines, the very best advertising our consumption-based economy can produce, and Bruce Springsteen playing the most contrived tradition in the history of rock at halftime. It would, in short, seem outrageously and insistently American.

Sal Paolantonio’s recent book How Football Explains America gives some context to understand what football is really about in our peculiar culture. It is not simply a history, although he covers football’s major historical developments in an efficient 197 pages. Rather, the book is a cultural argument that highlights those key moments when football was purposefully evolved to become, and marketed as, a symbol of America.

The rules of soccer haven’t changed in decades. Baseball makes a fetish of tradition, agonizing over changes like drug testing and replays that are obviously overdue. But football has never been satisfied with the idea that it is a perfect game. Each year the NFL sits down, as part of the regular offseason schedule, and tweaks the rules to make sure the game stays entertaining. These tweaks have been embedded in football’s DNA from the very start. Paolantonio observes that football has always been in “a constant state of reinventing itself,” striving to be more American and therefore embodying the American ethos in the attempt. His main point is that football explains America because the history of the sport is both a symbolic writing of the national myth and an example of that very myth in action.

In Paolantonio’s story, the most compelling insight is how football developed as a specific symbolic transference of our frontier mythology. The formal rules that differentiated football from the shared ancestry of soccer and rugby can be traced to the 1880s, suggesting a parallel with Frederick Jackson Turner’s famous 1893 observation that the frontier had closed. Early football provided an outlet for acceptable violence, a stage for the heroic individual in the form of the quarterback, and the conquest of rationally apportioned territory as the lines on the field were formalized like the railroad grids and tract homesteads of the settlement west. The cycle of brief, intense action followed by a period of rest and strategizing in the huddle—a further innovation—allowed games to be easily told in narrative form while emphasizing timing and precision as the keys to success. Thus football tried to rationally constrain chaotic action, to turn violent impulses into storylines, and to allow the American male to conquer something other than the wilderness. Football was a game, to be sure, but it was a game self-consciously designed by its founders to create a new field for an American myth made antiquated by reality.

Football has consistently adapted itself to stay at the front lines of American culture. Paolantonio offers many examples of these adaptations throughout the 20th century, including the visionary marriage with television in the 1950s and the shifting emphasis to entertainment and spectacle in the 60s. Of course the most significant argument for football’s special relationship with American mythology is the fact that it has replaced religion as the dominant Sunday ritual. Paolantonio gestures in this direction, but could go further. In a modern society where community and shared identity are found in sports as much as anything else, perhaps the ability of the NFL to generate social solidarity needs to be further explored. Peyton Manning, of all people, provides the most revealing quote in the book. “Fans have an identity with their team and their player and that attachment is something you can feel,” he says. “It’s a sense of belonging—to a team, to a city, to the country, too.”

It is not clear exactly how important football is to a uniquely American type of identity. But How Football Explains America attempts to address that question as a purposeful complement to Franklin Foer’s excellent How Soccer Explains the World. Comparing the two sports is an exercise that quickly approaches cliché: football is regimented, soccer is flowing; football has special rules for players, soccer treats all players the same; football is rational, soccer is creative. What Paolantonio illuminates is that these clichés, to the extent that they reveal something about the difference between America and the rest of the world, are neither meaningless nor arbitrary. Americans made football in our own image, manifesting our destiny in our own unique game.

It is not so much the details of how football embodies a certain spectrum of American values that is striking about How Football Explains America. Most thoughtful observers can already see that. It’s the constant and purposeful tweaking of the sport that is the most American thing about it, the consistent belief that with a dash of forward passing here, or a bit of televised pageantry there, there can be a more perfect American Sport. Football has always tried to be what we need it to be. So this weekend, when we watched the Steelers upend the Cardinals and saw The Boss’ choreographed halftime show, we were more than entertained; we became more American in the process.