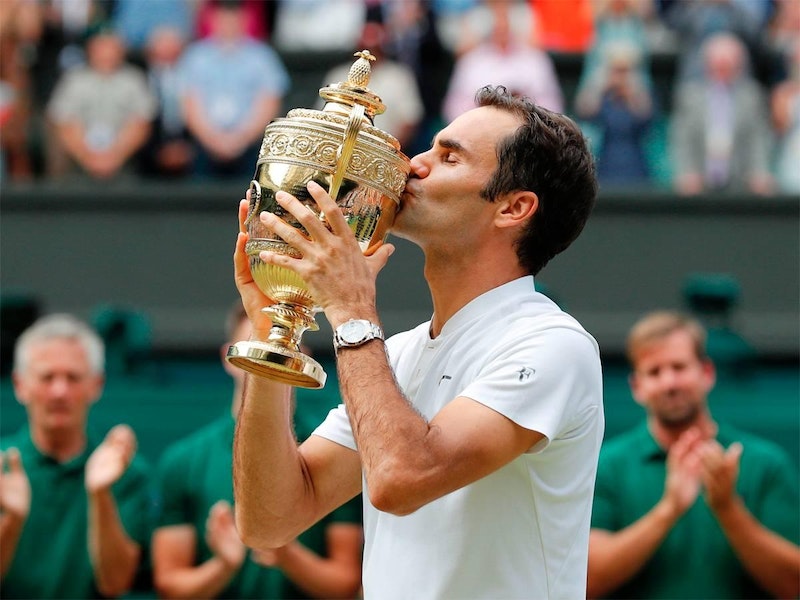 As the end of this year's Wimbledon tennis championship came into sight, a number of the game’s elite were missing in action on the men’s side. The upsets started in the very first round, with world number three Swiss star Stan Wawrinka losing to 49th-ranked Daniil Medvedev. Fourth-seeded Rafael Nadal, two-time Wimbledon champ, lost a five-set thriller round of 16 match to Luxembourg’s Gilles Muller that concluded with a 15-13 fifth set. World number two Novak Djokovic failed to get out of the quarterfinals after withdrawing with an elbow injury in the second set of his match against Tomas Berdych. Then, all of Great Britain gasped when their favorite son—world number one and defending Wimbledon champion Andy Murray—fell to 24th seeded American Sam Querrey in a five-set semifinal match.

On the women's side, the big story was that 37-year-old Venus Williams, with five Wimbledon singles titles, sailed through to the finals in fine form. Up against hard-hitting Spaniard Garbiñe Muguruza, who entered Wimbledon with a number 15 ranking, the first set was a tense 7-5 affair that saw Venus competing strongly until coming up a little short at the end. Inexplicably, for a player of her stature, she then failed to win another game in the match. Watching a great champion defeated like that was disconcerting. The TV tennis commentators struggled, and failed, to make sense of it. Maybe Muguruza is just too good for someone who’s been on the women's tour since 1994. That's certainly how it looked, but Venus deserves much credit for making it to the finals of a major tournament at her age.

Among those amazed that tennis deity Roger Federer was still standing amidst all the carnage you'd have to include prominent ESPN commentator Michael Wilbon, who demonstrated his tennis acuity way back in 2008 when he said the graceful Swiss champion was “done winning majors.” Federer, looking like he was giving master classes in how to win on grass, arrived at the finals for the 11th time without dropping a set, although his three-set semifinal victory over Berdych (7-6, 7-6, 6-4) was, in the end, decided by only a handful of points.

Wimbledon overachiever Querrey (he eliminated Djokovic last year) reached the end of his quixotic journey to play a match for a Grand Slam title when he met up with the equally lanky Marin Cilic. The Croatian world number six player, who’s won more tournaments on grass than any other player on tour this year, handled the American in four sets and punched his ticket to face the most successful male tennis player of all time in the finals. One storyline here is that the Croat upset Federer (6-3, 6-4, 6-4, in under two hours) in the semifinals of the 2014 U.S. Open, which he went on to win for his only major championship. With his grass-court game peaking at the right time, it appeared that he had at least a chance of taking major title number two against the 35-year-old Swiss legend.

It was not to be, however, and it didn't take too long to sense it. The 28-year-old contender's big first serve wasn't going in and the rest of his game followed suit. Federer becomes too strong once he gets a leg up on his opponent, so Cilic needed to strike early. When Federer broke his serve to go up 3-2 in the first set, the chances for an upset were quickly fading. The second set provided the sort of drama rarely seen in men's tennis, but unfortunately it was on the sideline. Cilic, while being attended to for a blister on his left foot that severely limited his mobility, broke down and began to weep. It wasn't his foot or the fact that he was losing. It was the emotional pain of realizing that he was not going to be physically able to compete for his dream title. Piers Morgan, exhibiting his standard sub-par level of cognition, tweeted: “ Get a grip, Cilic. You don't sob like a baby because you're losing. That's pathetic."

Still, Cilic soldiered on. Retiring from a Wimbledon final is not something any player wants on their resume. When he dropped the second set 6-1, it's doubtful even his team members thought he stood a chance. Federer finished him off with an ace in the third set, winning his record eighth Wimbledon 6-3, 6-1, 6-4.

Soon to turn 36, Federer appears poised to add several more Grand Slam titles to the unprecedented 19 he already holds. He emerged from his six-month tennis hiatus last year with a new game that looked much like his old one. Michael Wilbon was far from the only one who wrote him off years ago, but now it's looking like Federer will finish the year ranked number one. The only other player who stands a chance is Nadal.

Federer also cried on the final Sunday at Wimbledon. Sitting on the sidelines after his victory, he let the tears flow. During his victory speech, he was deferential to his vanquished, damaged opponent. Such grace is one reason his opponents find it hard to motivate themselves by ginning up some animosity towards him. When you make it through Wimbledon without losing even one set (the last player to do it was Bjorn Borg in 1976) you start to look invincible.