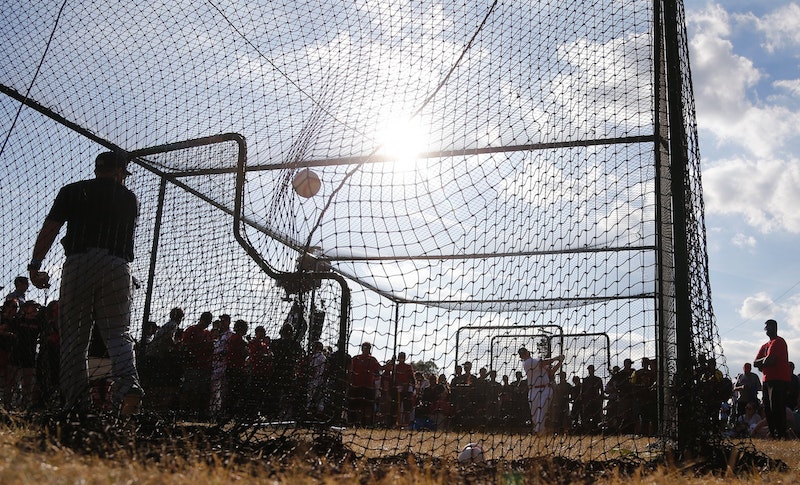 Now that we’ve suffered through yet another All-Star Home Run Derby with the Aaron Judge Longball Vaudeville down in Miami, it should be known that there was a Shawn Green sighting. Yes, the former Mets slugger and Dodgers star who wrote a book about Zen in the batter’s box called The Way of Baseball. Yes, the guy who used to give away his batting gloves to a kid in the stands after each home run.

He was not in Miami, though. Some nerds might remember he did appear in the All-Star Home Run Derby in Boston in 1999 when he hit exactly two over the Fenway fences. This time, though, Green was with another former Met, Cliff Floyd, and famous Scott Boras client Carlos Pena at a tacky MLB event in London’s Hyde Park on the Fourth of July. They were wearing knock-off Dodgers and Red Sox uniforms as they led two teams into a home run derby called “MLB Battlegrounds.” It was an official MLB International event and it had a Stepford Wives style crowd, many of whom seemed to be the same people MTV would hire to stand up front and be “enthusiastic” at the bygone Video Music Awards shows at Radio City.

A sampling of ex-pats did linger on the Fourth in the dusty park that’s now home to a seasonal parade of major pop concerts. Some of these shows, like the recent Green Day performance, inexplicably draw crowds of 65,000. A somewhat lengthy trek into Hyde Park’s interior rewards visitors with mini-strip mall food-courts and pop-up pubs, an outdoor cinema, and a few carnival rides. The MLB Battleground took place from one of the larger elevated stages, with gigantic inflatable “targets” worth points in the competition mangling the sightlines for anyone wishing to view the batters. An over-enthusiastic PA announcer hyped each swing by Pena and his retired buddies who were also joined by a few aging cricket stars, a few softball legends and a couple of failed European baseball players who might’ve made some noise in the minors 10 years ago. Pena was the most sought-after autograph up front, especially by the three people who remember the former first-round pick of the Texas Rangers who hit five homers in the All-Star Home Run Derby in 2009 at Busch Stadium in St. Louis.

Pena was somewhat aloof in his comments to the sideline reporters, unlike Floyd who was by far the most enthusiastic of the participants. The last time I saw Cliff in person he was screaming in absolute agony into the night sky at a lonely Shea Stadium. It was a Monday game in May of 1995 with about 13,000 in attendance on the fringes of LaGuardia Airport. Floyd was the Expos first baseman who reached for a straying throw on an infield squib. Mets lummox Todd Hundley was barreling down the first base line and collided with Floyd’s reach. The result was the fracture and dislocation of the wrist on his glove hand. The injury required four surgeries and almost ended his career. I had never heard a pro athlete howling in pain prior to that odd visit to Shea. I remember hearing Willie Randolph’s wrist bone break on a pitch from Bob Walk a few years earlier, but the Floyd screams were absolutely Munchian in comparison.

Back in the crowd I saw some pasty fellows sporting San Francisco Giants caps and Dodgers t-shirts. I had to step forward. “I just bought the hat,” said one guy. “He is the Dodgers fan,” he said pointing to his bearded millennial pal. Neither would elaborate as to the nature of their fandom or team loyalty. “Your Giants-Dodgers mix is the equivalent of me wearing a Chelsea jersey with a Tottenham scarf,” I said, citing a London soccer rivalry that equals the time-honored Dodgers-Giants angst. With that they shrugged and walked away in the direction of a boozy crowd behind a sound tower hoping for home run balls. The awkward angles of the stage, seating and penned off “fan” areas made the event somewhat treacherous. Line drives off Green’s bat would suddenly tear into a section of people with their backs to the action. Grown men wrestled for baseballs with the aplomb of life-raft crashers from the Titanic. The Brits lost all decorum whenever a stray baseball appeared. As the horsehide continued to scream into a rapidly drunken crowd, there was nary an ambulance in sight. Thankfully, I saw no blood as I meandered the park at sunset with my family, joined by many other folks who were no doubt being counted as “attendance” for this gratis farce event when in fact they were just innocently passing through the park.

The dismal coverage in the next day’s London newspapers acknowledged that MLB is “far behind” in efforts to have regular season games played in the English capital. The NBA, NFL and NHL have been using Limeyland as a public relations and marketing opportunity for many years. The fact that London papers call their sports sections “Sport” (so appropriately singular) indicates the culture which will welcome American baseball with the same enthusiasm reserved for diabetes and obesity, the two other great American exports. The papers and TV coverage were instead chock full of early-round Wimbledon tennis, a national team cricket test match against South Africa, and a national team rugby square off in New Zealand against the always-formidable All Blacks, Tour de France bicycle racing and the Premier League soccer transfer window featuring Wayne Rooney’s inevitable return to Everton and the familiar prostitutes of his youth. Good luck, Shawn Green!

One prominent cricket fan I’m acquainted with in London is playwright Tom Stoppard. He held his 80th birthday party in the Chelsea Physic Garden the day I arrived which was several days before nascent England captain Joe Root would lead the national side against South Africa at Lords. Jet lagged and full of Pimm’s, it was the type of party where a hoi polloi outsider can observe details that might come in handy someday. Sir Bob Geldof, one of three cap-wearing fellows at the party, commended me for wearing my Fred Perry lid “the right way,” meaning forward. “When I was in New York sometimes I would see guys with the hats on backwards and I would stop them and whisper to them they had it on wrong,” Geldof said before I could request my money back for the Boomtown Rats crappy fourth album Mondo Bongo, which I paid a shitload of money for as an import in Columbus, Ohio, back in 1981.

Geldof was standing in front of the statue of Sir Hans Sloane, who was gesturing toward actress Maggie Smith sitting at a table eating watermelon and wearing Skechers on her feet. I looked at her and she was ogling Rupert Murdoch, standing near a fence in a Pablo Picasso-style striped shirt and blazer get-up, well-tanned and obviously dressed by his latest wife Jerry Hall, who was seated on a bench to his left and was greeting her ex Mick Jagger, who was wearing a black baseball cap with nothing on it, also in the Geldof-approved bill-to-the-front fashion. Behind them, a stilt-walker approached on a garden path walking a tall poodle.