He's rich and drives a Lamborghini, but talks like a loser. 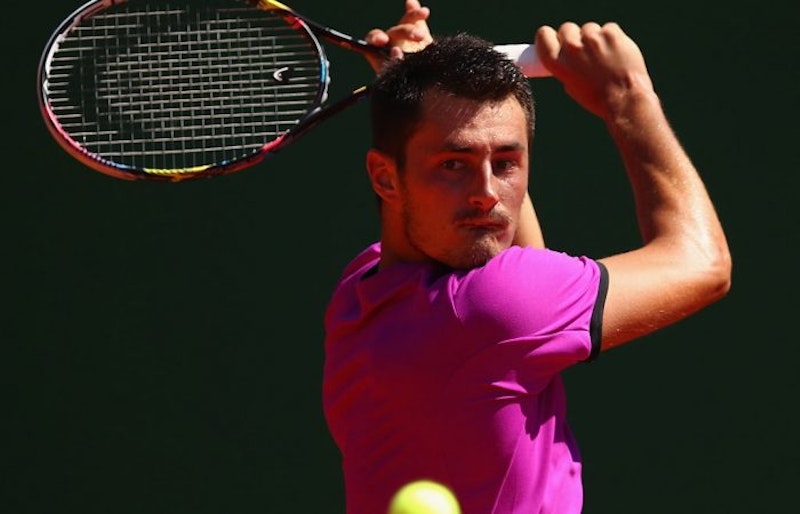 Australian tennis player Bernard Tomic is an enigma. After his first-round, straight-sets loss to Mischa Zverev at this year's Wimbledon, he told the media he was bored and unable to find any motivation at tennis’ most prestigious event. Nobody at the press conference had to be talked into believing him, as throughout the match it appeared that he'd rather be chilling out in the players' lounge. The Aussie’s indifference didn't go over well with the tennis establishment. Women’s tennis legend Martina Navratilova accused him of being “disrespectful to the history of the sport,” and Australian tennis hero Pat Cash took a shot at his countryman.

But 24-year-old Tomic, nicknamed Tomic the Tank Machine, is not the type of person to be chastened by anyone, no matter who they are. In an interview with Australia’s Channel Seven on Sunday, he told Melissa Doyle that he’s made a career out of giving a 50 percent effort. “I haven’t really tried and I’ve achieved all this,” he said. That's not what Australians want to hear from their sports stars, as Tomic knows. It's what a spoiled brat who wants to piss people off says. Tomic doesn't even care if the Aussie fans get tired of watching him tank matches and think twice about buying tickets to see him play. He told Doyle that those people should watch him on TV instead, because he never knows which version of him will show up.

Tomic’s one of those guys nobody tells what to do, and that includes the police. A couple of years ago, he threw a wild party at a $7,000-a-night Miami Beach hotel that was so loud security asked him to vacate the premises. When he refused, the police arrived, and the inebriated tennis player told them he wasn't going anywhere so they arrested him. The Miami police handcuffed the world’s 25th-ranked men's tennis player that evening, but Tomic’s at 73 now. He’s talking of playing for another 10 years, but often sounds like he wants to quit tomorrow.

While Tomic hasn't worked hard, as he admitted on TV, that doesn't stop him from taunting his critics with his wealth. “You probably don’t like me but, at only 24, you guys can only dream about having what I have at 24,” he told the Sunday Herald Sun. “End of the day, don’t like me or whatever. Just go back to dreaming about your dream car or house while I go buy them.”

Australia's tennis aristocracy doesn't know what to make of their petulant, Lamborghini-driving star, who appears to have descended from some other lineage divorced from the proud tennis history of that nation. Embedded in Australian tennis lore is the memory of champions like Rod Laver, John Newcombe, and Ken Rosewall, who always competed hard, no matter how bad the match was going, while maintaining reputations as gentlemanly sportsmen. It's not even possible to imagine one of them openly boasting about how much money he’d made with a half-assed career effort or not even pretending to try on the tennis court.

That was back in the Age of Honor when there were codes. It seems quaint in the era of the cult of the superstar, when personal brand is what matters, and allegiance is owed only to the self. In the six years since his Wimbledon shocker, Tomic’s gone from wunderkind to question mark. His match record is 9-15 in 2017, and he's already stated publicly that he couldn't care less about how well he does at the next Grand Slam, the U.S. Open. He talks like a loser now. The guy who was ranked number 17, and is now at 73, is just going through the motions because this is the job that his overbearing father, John, chose for him years ago and it pays well. In a sense, when he acts out on the tennis court or tells the media he doesn't like tennis, he's addressing his dad. He's saying, “This is what you made me, and I'm miserable.” The penthouse hotel rooms, the properties around the world, the Italian sports cars—they seem like vain attempts to fend the demons off now that materialism and world weariness have replaced the bright dreams of the 13-year-old who once told a reporter he'd be ranked number one by the time he was 18.

“Living in these lavish houses, property around the world, it's my choice,” Tomic told Melissa Doyle. “I've worked for it and I've earned it.” That's a lot of hubris. You’d never hear Roger Federer talk like this. The path Tomic’s on now isn't sustainable. The meltdown at Wimbledon, where he also feigned an injury, cost him millions when Head withdrew its sponsorship deal. Nike’s hanging in there with him, but if he loses that deal much of his guaranteed income will vanish. Tomic's worth millions, but it could disappear if he can't pull himself together. Plenty of other elite athletes have made the mistake of spending like the money will never run out. The smug look on Tomic’s face won't be there for long at this pace. The question is, will anyone even care by the time he implodes?