Will the Cardinals Auction Off Colby Rasmus? 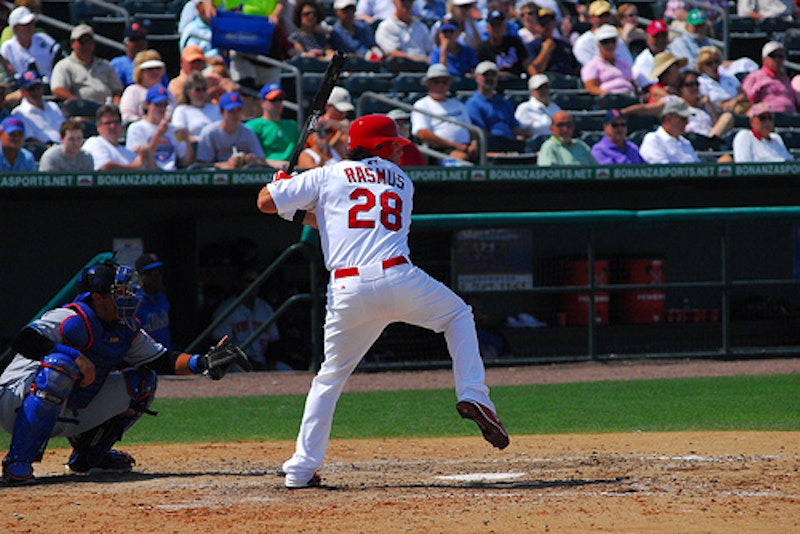 Colby Rasmus has never hit for a steady average, and the Cardinals realize that he’s never going to win a batting title. His relatively high BB and slugging percentages made up for that, but now that the center fielder isn’t hitting home runs, he’s quickly falling out of favor in St. Louis.

Once a top prospect and now a fan favorite, Rasmus had an All-Star 2010. Dubbed a five-tool player, Rasmus’ rare combination of power and speed is highly valued on the trade market, which is why clubs have been inquiring about the youngster. Playing a premium position up the middle doesn’t hurt his stock, either, even though he doesn’t field it particularly well, according to UZR. If St. Louis GM John Mozeliak decides to move Rasmus, he’d need a great return that could help out the Cardinals right away.

The Cards are currently tied for first place in the NL Central with division rival Milwaukee Brewers. Trading away your starting center fielder may seem like a bad decision for a contending team, but since Rasmus is producing so poorly at the plate, sophomore Jon Jay could fill in for him without missing a beat. In 248 plate appearances Jay has managed a .304/.352/.432 slash line to go along with seven home runs. When taking his productive rookie season into account, Jay appears to be the more viable option going forward. Rasmus’ deep pedigree will undoubtedly attract other general managers in need of an upgrade, however, and here are some of the teams that could be interested:

Tampa Bay Rays: After practically stealing away the Cubs’ best prospects in last winter’s Matt Garza trade, the Rays may have another chance at receiving a hefty return for one of their starting pitchers. James Shields is throwing like an ace, as opposed to the batting practice machine he was last year, and is under team control until 2014. Better yet, going forward his contract is three inexpensive club options, so if he reverts back to his 2010 form the Rays can simply cut ties with the innings eater. If the Cardinals were interested, it would take more than Colby Rasmus to lure Shields away from Florida. One of St. Louis’ three top prospects, Shelby Miller, Carlos Martinez or Zack Cox, would likely have to be included in the package. A dominant ace going down the stretch in invaluable though, and when Adam Wainwright recovers from Tommy John surgery they could make a killer one-two punch. Shields is expendable for Tampa mainly because they have lefty Matt Moore in the minors, but also, even though they’re only six games out of first place, making it to the playoffs looks unlikely with Boston and New York at the top of the standings. With Rasmus under their control, B.J. Upton becomes even more useless, and may find himself briskly shipped off to Washington.

Atlanta Braves: It’s well known that Atlanta has been in search of a long-term center fielder ever since Andruw Jones split town, and GM Frank Wren has been eyeing Rasmus for a long time. Stability in center is much needed after years of poor performances and underachieving, highlighted by the Nate McLouth disaster. Atlanta is rich in pitching depth, both in the rotation and the bullpen. Mozeliak wouldn’t be crazy in asking for Craig Kimbrel or Johnny Venters plus a top prospect, like Julio Teheran.

Washington Nationals: Mentioned earlier as a possible landing spot for Upton, the Nats could opt to trade for Rasmus instead, since he has more years of team control left. Washington, however, doesn’t have much to offer St. Louis. Tyler Clippard, an All-Star setup man, is currently in the middle of a dominant season, and the Nats have expressed willingness to move the righty. Clippard alone won’t be enough, though, which is why Upton is a more logical fit, since he’s less valuable than Rasmus.
Colby Rasmus is a great player in the midst of a disappointing season. He’ll most likely regain his power stroke in the future, but currently the Redbirds are more inclined to sit Rasmus in favor of Jon Jay. Trading their center fielder could not only help them push past the Brew Crew and fend off the Pirates and Reds, but it could also solidify their team for future years.