In Defense of Derek Jeter

"If Derek Jeter isn’t an All-Star then no one is." 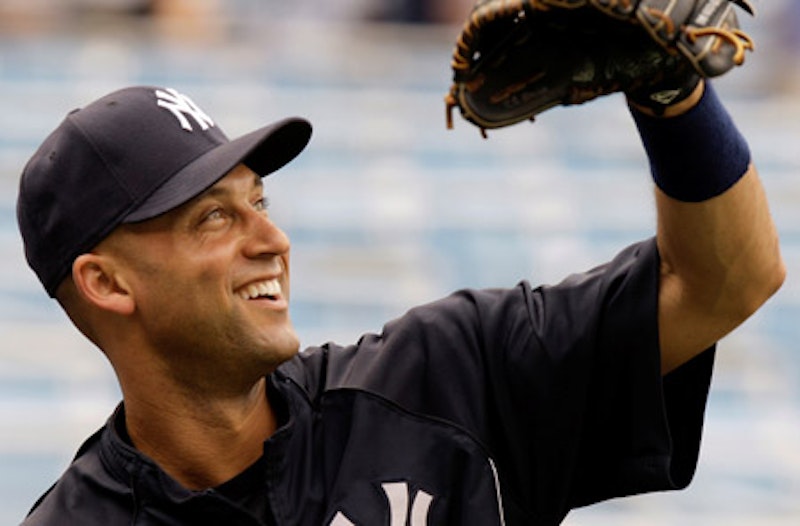 I never thought I’d ever write anything positive about Derek Jeter but these are strange times. As the Yankee Captain closes in on 3000 hits and prepares to start yet another All-Star game I’ve finally found some appreciation for a previously hated foe. Growing up in Baltimore as a diehard O’s fan meant Yankee hatred was ingrained in my DNA. I hate the pinstripes.

My Yankee hatred reached its apex during the 1996 playoffs when that coward Richie Garcia and scallywag Jeffrey Maier stole game one of the ALCS from the O’s. Jeter was still a youngster at the time and the Yanks hadn’t won anything since the early 80s so my disdain was mostly focused on Paul O’Neill who is probably my all-time most hated athlete. The years rolled by and championships piled up for New York. Over time Jeter evolved into the face of the franchise and thus the conduit for most of my venom.

As the Orioles drifted hopelessly into irrelevance and made no real effort to compete my hatred for Jeter and all things Yankee began to wane. Sure, I still despise the team’s ignorant fans, and the ability to write checks to cover front office mistakes and that damned John Sterling, but where has it gotten me? The O’s still suck and the Yankees still make the playoffs every year.

Maybe fatherhood has mellowed me. Perhaps I’m too busy to focus on hating a bunch of guys I’ve never met who play a sport I was never very good at. Whatever the reason, somewhere along the line I’ve begun to appreciate Derek Jeter for what he is; a future Hall of Famer and one of the best shortstops to ever play the game.

Jeter’s detractors habitually point to his supposedly lackluster defensive stats, claiming that his multiple Gold Gloves are largely a function of his popularity. I think that argument holds some water but there’s no real consensus as to which defensive stats are even the most reliable. If Jeter’s opponents and peers thought he was a good defensive shortstop then that’s good enough for me. Yeah, those pinstripes probably got him a few extra Gold Gloves but that comes with the territory.

Jeter has also been criticized for not being a power hitting shortstop in the Cal Ripken and A-Rod mode. Again, a valid argument but that doesn’t mean he wasn’t a great player. I think Barry Larkin is a fair comparison for Jeter. Larkin belongs in the Hall of Fame and I think will eventually get there. If Larkin had played in New York and Jeter in Cincinnati perhaps they would each be viewed differently but we play with the cards we’re dealt.

I’ve heard a lot of criticism surrounding Jeter’s selection to start the 2011 All-Star game. Jeter had just come off the DL when the voting results were announced. While he certainly hasn’t played up to the level of Cleveland’s Asdrubal Cabrera in 2011 he is Derek-freaking-Jeter! Jeter deserves to start the All-Star game for two reasons; 1) the game is for the fans and he won the fan vote, and 2) just as Tony Gwynn and Ripken were All-Stars after their prime Jeter should get the nod for longevity. He’s been a leader, a clutch performer, and a champion, baseball’s most recognizable star for over a decade and never run afoul of the law or media.

If Derek Jeter isn’t an All-Star then no one is. As Jeter approaches 3000 hits I’ve read some blog and Twitter posts clamoring for him to sit so the team can start someone named Eduardo Nunez. Apparently the geniuses in Bronx are ready to cast aside over 15 years of stellar play from an all time great because a reserve infielder from AAA had a relatively good two weeks. Nunez is only 23 and perhaps he could develop into a solid big leaguer but his minor league track record suggests it’s unlikely. In six seasons Nunez has posted a career OPS of just .687. He’s a modern day Kevin Maas, who was crowned the next Lou Gehrig after a torrid few weeks in 1990. Jeter’s greatness has faded into ordinary and the “What have you done for me lately?” Yankees crowd is proving that he was too good for them all along.