Batting practice with dad and some games of old. 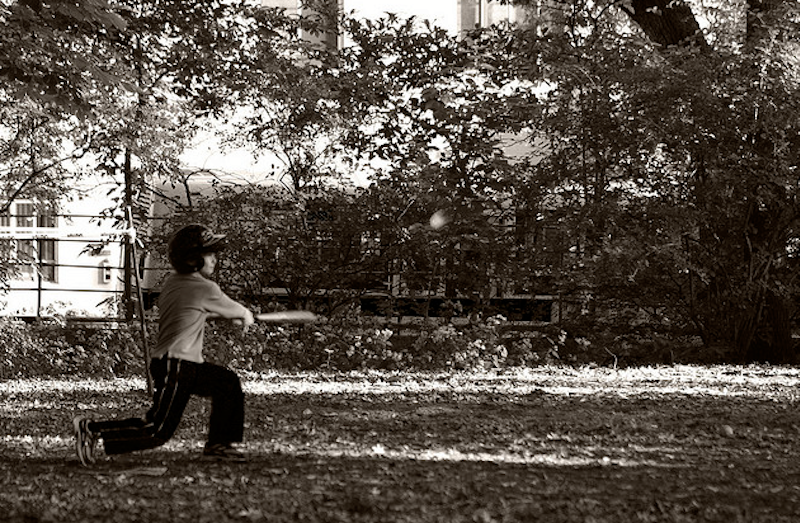 I watched Monday's coverage of the Home Run Derby for about an hour. I love the exhibition but it’s interminably long I can only take so much Chris Berman. An hour was long enough to see Robinson Cano and Adrian Gonzalez hit some moon shots into the Arizona night and a couple balls come close to plopping into the pool.

Robinson Cano and his dad, former big leaguer Jose Cano, were the story of the night on Monday. Cano used his powerful lefty stroke to pepper the right field stands in Chase Field. It was a beautiful sight to see, even if it did come from a damned Yankee. Watching Cano and his father reminded me of the batting practice my own dad used to throw to me. When my father got home from work I'd drag him to the field at McCormick Elementary in Hazelwood for a round of batting practice. I use the term "drag" lovingly. Dad was always a willing participant but it’s only now, after all these years and two kids of my own, that I have some comprehension of just how exhausted he was when he got home. There are days that I get home tired, stressed, hot, cold, worried or just plain pissed but I try my best to not let it affect my interaction with my wife and kids. My dad taught me that lesson on those hot summer afternoons as he tossed batting practice to a scrubby 10-year-old after working a full shift. Now, as I'm greeted at home by a four-year-old wearing an O's cap, Cubs wristbands and holding a Phillie Phanatic commemorative bat, that I get it.

An hour of Monday's derby was also long enough to jog the memory of my own brush with the home run derby. Baltimore hosted the 1993 MLB All-Star game and as season ticket holders my father and I were lucky enough to attend FanFest and the Home Run Derby. Yes, in 1993 the Orioles actually had season ticket holders. In those days the Derby was not the primetime event it is today. It was held during the late afternoon and I don't remember it taking anywhere near three hours like Monday's derby. I do remember a pissed off Mike Piazza getting shut out.

The '93 derby is most notable for the ball that Ken Griffey Jr. hit off the B&O Warehouse. I was sitting down the right field line and I remember that ball soaring over my head, followed by the reaction of the crowd. We didn't know what caused the ruckus but assumed that the ball had hit the warehouse, a fact that was confirmed a short time later. The funny thing is that Griffey's wall ball wasn't even the longest homer of the day. It doesn't get much attention but Texas outfielder Juan Gonzalez hit an absolute laser beam that ricocheted off the facade of the upper deck in left field. It was a line drive and by far the hardest hit ball I've ever seen. I've watched a lot of terrible Oriole pitchers give up a lot of bombs over the years but nothing tops Juan Gone's blast into Camden Yards' third deck.

I've attended some of the most memorable games in recent Baltimore baseball history. I was there for 2130, the day Cal Ripken Jr. ended The Streak, and Ripken's 400th homer. Cal's 400th home run was probably the most noteworthy home run for me. I was in my early 20s at the time and working a thankless entry-level job. One of the muckity mucks in the office offered up four O's tickets to anyone interested for the evening's game. Three co-workers and I took the tickets and made a night of it. After running up a sizable tab at Pickle's Pub I suggested we actually go into the ballpark. By the time we made it across the street and found our seats the O's were coming to bat in the bottom of the third. I wasn't sitting for more than about 10 seconds before Ripken lined a homer to left field. I immediately knew the significance of the shot and still have the ticket framed in my home. Every time I look at that ticket stub I am thankful that we didn't stay for one more beer.