Pedroia is well on his way to picking up his second MVP. 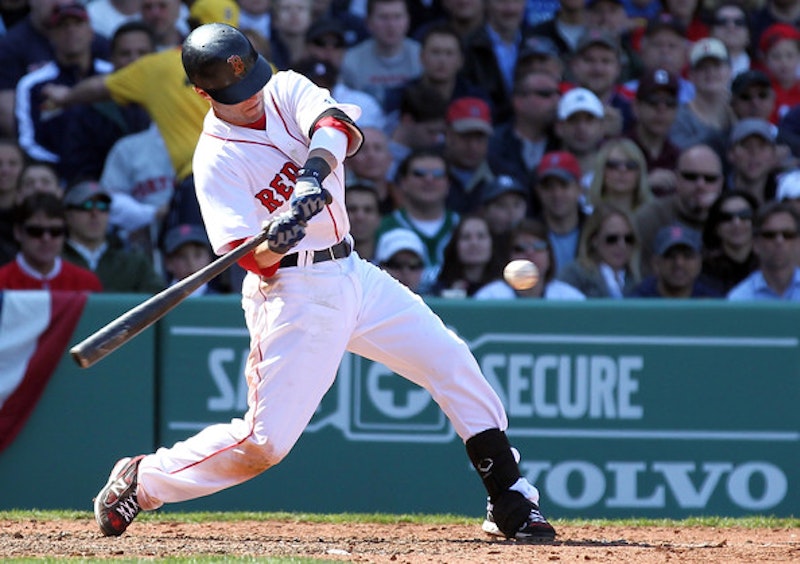 The consensus prediction among baseball analysts is that, so far, Adrian Gonzalez is the odds-on favorite to win the AL MVP. His .354/.414/.591 slash line is thoroughly impressive and many are convinced that he’s the main reason behind Boston’s 55-35, AL-leading record. The acquisition of Gonzales seriously fortified Boston’s roster, but going forward, Dustin Pedroia is the key to a 100-win Red Sox season.

Gonzalez’s numbers are gaudy at first glance, but when examined more closely, flaws start to appear. His .354 batting average, for example, is as amazing as it is unsustainable. A .394 BABiP is nearly impossible to carry throughout an entire season, especially for someone with a career .319 mark. The most alarming number in Gonzalez’s stat sheet though, is his BB%. At 8.6%, if his AVG does in fact dip during the second half, A-Gon will have trouble keeping his OBP over the benchmark .400 clip. In 2009, Gonzalez led the Major Leagues in walks, which is why such an average percentage is cause for alarm. It could be easily explained by his switching from the NL West to the AL East, with the better pitching making him less selective. The same thing happened to Miguel Cabrera when he moved from the Marlins to the Tigers, with his BB% dropping from 11.6% to a pedestrian 8.2%. Steadily Cabrera acclimated to the league and is now second in the AL in walks. The less potent Padres lineup, however, could have inflated Gonzalez’s BB%. A-Gon was the only feared hitter in San Diego’s lineup for years, and opposing teams clearly tried to pitch around him every chance they could. Now sandwiched between Pedroia and Kevin Youkilis, Gonzalez is seeing far more pitches to hit, but in turn, a lot less pitches to wait on.

Pedroia, meanwhile, could be in the middle of the best season of his career. I don’t want to jump the gun, because the second baseman’s 2008 was pretty spectacular, but if he continues at the torrid pace he’s been on since the start of summer, the fan favorite will be winning his second MVP award. Now, he’s not going to bat .375 for the rest of July, but a .300 AVG going forward is completely realistic. Also, he’s on pace to hit over 20 home runs for the first time in his career. Additionally, Pedroia has quietly stolen 16 bases already and has been caught just three times. His most impressive statistic, however, is the one Gonzalez is having the most trouble with. Pedroia’s BB% is at a career high 15.4% and he’s third in the AL with 63 walks. Combine those offensive numbers with Gold Glove caliber defense (not that that means much anymore) and you have one of the most valuable players in baseball.

Controllable through 2015, Boston’s GM Theo Epstein should consider locking his second baseman up with a Troy Tulowitzki-esque contract. Without a ton of power, players like Pedroia often have an underrated skill set on the free agent market—unless, of course, you’re Derek Jeter. That may sound ridiculous at first, but Captain Intangibles and Pedroia are very comparable. Both play up the middle, are able to hit for a high batting average, have limited but useful power, and productively steal bases despite the lack of great foot speed. This, of course, is old school, good Derek Jeter; not washed-up, snobby Derek Jeter. To his credit, Jeter made better contact in his prime, but Pedroia takes more walks, so it basically evens out.

An extension for Pedroia wouldn’t cost much, considering his devotion to the team. A five-year/$80 million contract or a six-year/$90 million would not only set the second baseman for life, but it would also make sure that he ends his career with the Sox. Analysts have panned these long-term deals, but they only see the risks involved. Aside from a broken foot, Pedroia has been free of any injuries and players of his skill set often don’t start to decline until the later end of their careers. The money saved, however, could be exponential. The free agent market has been getting pricier and pricier in the last five years, and who knows what it could be like in 2016. Who would’ve thought that Carl Crawford would get $142 million? Jayson Werth’s $126 million was even more surprising. Older players are getting more years and dollars than they ever have before. The Texas Rangers offered Cliff Lee, at age 32, a seven-year/$147 million contract and CC Sabathia, 31, is getting ready to opt out of the remaining four-year/$92 million on his deal with the Yankees in order to test the open market. In 2017, $16 million may very well be a giant bargain for Pedroia’s services.