Will Tanaka Be the Cubs' Latest Tease? 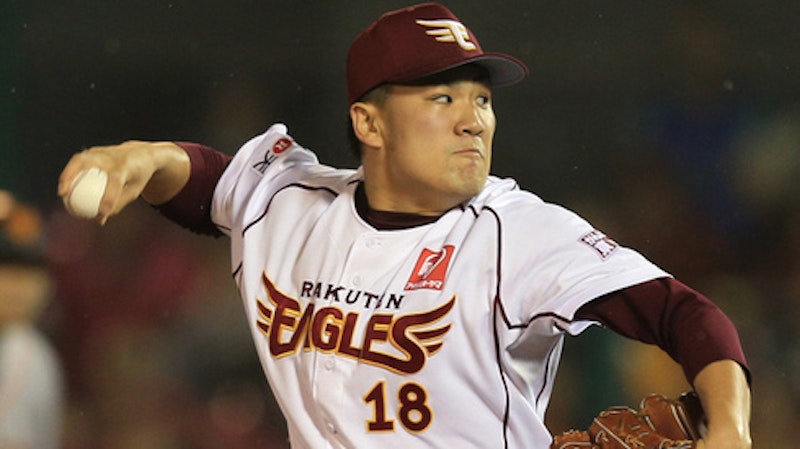 The posting of Japanese hurler Masahiro Tanaka earlier this month slowed baseball’s free agent market to a crawl. Tanaka has until January 24 to decide on a new big league home, or to return to the Rakuten Eagles, and he seems intent on using every single minute of that time. The 25-year-old right-hander with the sterling record (24-0 in 2013) and impressive repertoire is poised to become baseball’s latest $100 million man.

The Chicago Cubs have reportedly been very serious about adding Tanaka to the club’s rebuilding program. Chicago has amassed an astounding collection of young offensive prospects under the tutelage of Theo Epstein but has been unable to make similar improvements on the mound. Travis Wood’s been a solid acquisition, and Jeff Samardzija may have ace potential, but the addition of Tanaka might put the Cubs in position to compete in 2015 when young sluggers like Kris Bryant, Javier Baez, and Albert Almora matriculate to the big leagues.

The Cubs and their ownership, the Ricketts family, have drawn criticism this offseason for additional cuts to the payroll and transactions affecting only the fringes of the roster. While fans hoped that this offseason would see the pursestrings loosened, the opposite has occurred. Visions of Brian McCann and David Price in Cubbie blue were quickly dashed and the team’s projected Opening Day payroll is less than $80 million, which hardly befits the nation’s third largest market. The club’s introduction of a mascot, Clark the Cub, earlier this week was not well received by a fan base that wants less marketing hucksterism and better on-field product. The Ricketts were called out for their thrifty ways in a column last week by Jeff Passan of Yahoo! Sports. The criticism isn’t wholly unwarranted but it may be a bit premature.

There’s a chance Tanaka ends up calling Wrigley Field home. The usual suspects (Dodgers, Yankees, Angels) are reportedly very interested in adding the Japanese ace. Chicago is generally viewed as a darkhorse candidate but recent developments may leave the Cubs as Tanaka’s most likely destination. The Dodgers just shelled out a seven-year contract to Clayton Kershaw that will pay him more than $30 million per year. Kershaw and fellow Dodgers’ hurler Zack Greinke are guaranteed close to $400 million. The ballclub also owes Josh Beckett more than $15 million in the last year of his deal. Money doesn’t seem to be a problem for Magic Johnson and company but will Los Angeles really spend another $20 million per year for an unproven Japanese import? Los Angeles already has five starters in place with Greinke, Hyun, Jin Ryu, Beckett, and Dan Haren slotted behind Kershaw. Chad Billingsley, recovering from elbow surgery, will also be in the mix. Tanaka would be the ultimate luxury item for the Dodgers.

The suspension ruling on Alex Rodriguez gets the Yankees off the hook for his massive 2014 salary. The A-Rod suspension could allow the Yankees to sneak in under the $189 million luxury tax, a goal that ownership discussed openly before splurging for free agents Jacoby Ellsbury, McCann, and Carlos Beltran. A deal for Tanaka could make the Yankees viable World Series contenders but it will assuredly push the club past the luxury tax threshold.

The Angels and Arte Moreno are never shy about tossing nickels around and this offseason may not be an exception. The Angels need to improve their pitching staff and Tanaka is the most intriguing option available. It’ll be interesting to see how far the Angels will go to bring Tanaka to Anaheim. They’ve already committed huge contracts to Albert Pujols, Josh Hamilton, C.J. Wilson, and Jered Weaver with superstar Mike Trout waiting in the wings for a megadeal that could potentially surpass Kershaw’s average annual value. Matt Garza and Ervin Santana could be attractive fallback options for the Angels if they’re outbid by the Cubs for Tanaka.

There’s always a chance that a surprise team—the Diamondbacks, perhaps—could grab the prize, but all indications point to Tanaka landing with one of the teams mentioned above. The Tanaka negotiations will be very telling about the direction of those four clubs. Are the Yankees going for broke once again, luxury tax be damned? Will the Dodgers pay more than $100 million to add a seventh starting pitcher to the fold? Will the Angels divert the Tanaka dollars into their ever-growing “Mike Trout fund”? Finally, will the Cubs break out the checkbook and get on with the business of constructing a contender or will Tanaka simply be the latest tease for Cubs fans?