Seriously, work that out because Fatheads are expensive. 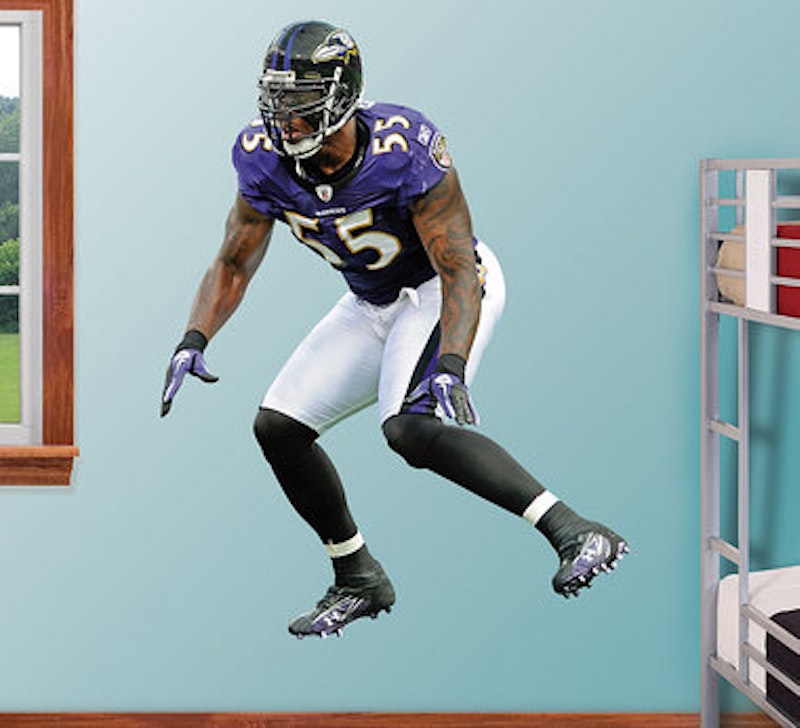 I don’t give a shit about sports. I sucked at them at every level of school. I let my kids play if they want, am fine if they don’t. My three girls dabbled in soccer, none have participated at the high school level; they prefer the arts.

But my eight-year-old son is another matter. My husband was captain of his high school and college football teams and he also played baseball and basketball, and was on the track team. My son loves sports. So far we have team photos from soccer, baseball and basketball, and next year he’ll finally weigh enough to play football. He and his dad can often be found watching college football or basketball, NFL, NBA, whatever, if it’s a sport, they’re watching it when they’re not outside throwing a ball around.

Since I’m from Philadelphia, I have an allegiance to the Philly teams, and the only sport I actually don’t mind watching is hockey: I love the Flyers. I bought my son Philadelphia gear from the time he was a baby until the time he was in kindergarten and begged me for a Ravens jersey. All the other kids had something to wear on “Purple Friday” and I figured, we live in Maryland, so I can’t make him wear Philly green forever. Baltimore Purple it was.

His favorite player from day one, don’t ask me why (when all the other kids seem to wear Flacco or Rice jerseys) is Terrell Suggs. At eight, he can tell you all his stats and everything about each game he’s played in. He’s a junkie of sports stats in general, but the Ravens #55 is his favorite. For Christmas, we bought him a Terrell Suggs jersey. One of his sisters sprung for a signed Suggs mini-helmet from eBay, another for a #55 bobblehead, the third for a blanket for his bed.

Last week, when he found out we were moving to a new house, he got tears in his eyes. I do not like to see my only son with tears in his eyes because this has happened only a few times ever. He is not a crier. I scrambled in my head for something to cheer him up.

“Maybe we can get some Ravens stuff for your new room,” I said cheerfully.

And he brightened up for a moment.

“Can I get a Terrell Suggs Fathead for my room?”

So much hope in his eyes, a smile, the promise he wouldn’t cry anymore. I had no idea what a “Fathead” was, figured it was some toy; I didn’t care.

“Of course you can, honey.”

He jumped up and down. The tears were gone; he ran to tell his sisters. Eager to fulfill my promise, I Googled “Terrell Suggs Fathead” and was horrified. A Fathead, I learned, is a wall decal. It costs $100.

$100. FOR A FUCKING STICKER. No, I thought. I shopped around a few websites and eventually found a new one on eBay for $75, still in absolute sticker shock for what is basically a set of giant Colorforms (what we called them when I was growing up in the 70s and 80s and they were small and probably under $5). A promise is a promise, though.

So I tell my neighbor, a huge Ravens fan, that Bobby asked for this Suggs Fathead thing and she is a sports fan so she a.) knew what a Fathead was and b.) informed me that the Ravens might trade Terrell Suggs because he had a shitty year.

I was livid. “THEY CAN’T TRADE HIM,” I said loudly, “I JUST SPENT $75 PLUS SHIPPING ON HIS DAMN STICKER.”

I Googled again. It’s true that the coach or owner was like making thinly-veiled threats about trading him for not performing so well this season, even though when I asked my son, he informed me that Flacco is the one they should trade because he didn’t have such a great season either and he makes too much money. He then started quoting Suggs’ statistics and I kind of spaced out because I hate sports.

I’m thinking of having my son write a letter to Terrell Suggs asking him to consider extending his contract with the Ravens. Because seriously, does this guy know how much money people spend on the stuff with his name on it? At the new house, I’m putting the Fathead on the door side of his wall so I don’t have to be scared half to death walking down the hall late at night after a Manhattan or two and seeing a six-foot high purple football player charging in my direction.

Think of the children, Suggs.