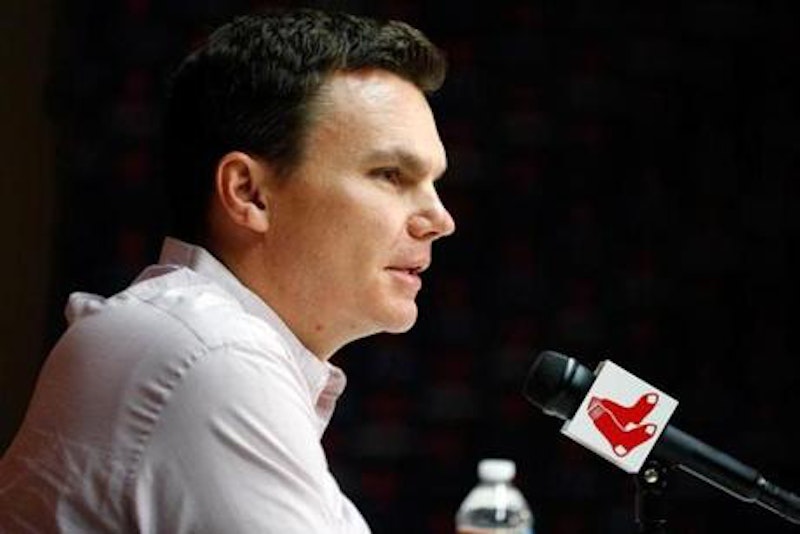 Is Red Sox GM Ben Cherington in the middle of an incredibly calculated offseason, or is he simply taking a conservative line? Is he biding his time, waiting to strike when the perfect opportunity comes along, or is he just playing it safe, afraid to deviate from his 2013 World Championship team? I certainly hope it’s the former, but I’m growing more convinced by the week that it’s the latter. Boston’s front office was apparently involved in the Jose Dariel Abreu discussions until the very end; they were a major player in the Corey Hart market; they seriously considered trading for Matt Kemp; and they’ve talked to Masahiro Tanaka’s agent. Any of those moves come to fruition? Nope.

I’m not focused on those specific transactions. I just want Cherington to do something that doesn’t involve re-signing a player from the 2013 club. Mike Napoli was great for one season, but who wants to deal with all those strikeouts for another two years? And at a $16 million AAV, he’s not cheap. While A.J. Pierzynski is new to Boston, signing him to a one-year deal still counts as a conservative move, because it shows that Cherington doesn’t have the guts to let Ryan Lavarnway get regular playing time behind the dish.

The San Francisco Giants are a cautionary tale of what can happen when you retain every member of your championship team. GM Brian Sabean re-upped almost all of his free agents after both 2010 and 2012. The subsequent seasons, 2011 and 2013, were disappointments. The moral? You can’t win with the same team twice. In general, conservatism isn’t a great strategy. Mets GM Sandy Alderson, who took over the team in 2010, is known for his conservative nature, and where is the team now? Well below .500.

It’s easy to praise Alderson. The R.A. Dickey and Carlos Beltran trades were very profitable. Signing Marlon Byrd was smart (waiting until August to trade him was stupid). The David Wright extension looks like a bargain, especially in today’s inflated market. Every GM can claim a host of prescient acquisitions, though. Alderson is better characterized by the moves he hasn’t made, which are many.

His entire offseason has been spent vacillating over whether or not to trade Ike Davis and move Lucas Duda to first base. In the meantime, many of his trade partners have moved on; the Rays resigned James Loney, the Sox resigned Napoli, the Rangers acquired Prince Fielder. Alderson is so scared of making a bad move that he hardly does anything at all. It looks like Cherington is following his lead.

That’s not to say that Cherington should constantly be on the phone. White Sox president Kenny Williams is known for the myriad of surprising, and controversial, acquisitions he’s made across his shockingly long tenure (why did the team take so long to give Rick Hahn control of baseball operations?). Toronto’s Alex Anthopoulos went trade happy last offseason, and look where that left the team (what’s more interesting is that AA is being even more cautious than Cherington this winter. Something fishy is going on in Toronto…).

The best general managers, unsurprisingly, fall right in between extreme caution and recklessness. St. Louis’ John Mozeliak and Tampa Bay’s Andrew Friedman, two of the best GM’s in the sport, are examples. Mozeliak, who engineered 2013’s pennant-winning Cardinals, has already retrofitted his near-perfect team with outside help. Trading for Peter Bourjos was a smart move that will likely pay off in both the short and long term, and signing Jhonny Peralta solidified their weakest position. Peralta may not be the flashiest name in baseball, but he’s a consistent producer that makes the Cards’ lineup all the deeper. Friedman, of course, is a wizard. He’s somehow kept the Rays, the smallest of small market teams, competitive in baseball’s toughest division.

So, Ben Cherington, I challenge you to take some more risks. Don’t be a Sabean (despite the fact that he has won two championships in the last three years, this is still an insult).